“We are thankful, however, that we are now one step closer to fully resuming a program of welcoming refugees to the safety and hope of this land,” the Rev. E. Mark Stevenson of Episcopal Migration Ministries, or EMM, says in the statement (included below). 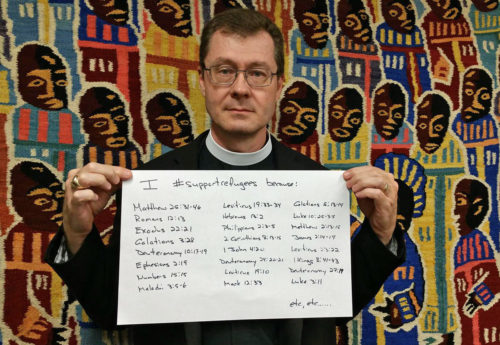 Federal officials announced in a Sept. 27 Department of State special briefing the planned cap of 45,000 refugee admissions for the 2018 fiscal year — the lowest number in the history of the Refugee Admissions Program.

Federal law requires the president to make an annual determination of the maximum number of refugees who will be allowed to resettle in the United States. Under President Trump, the number will be cut to less than half the historic average number of admissions.

There are more than 65.6 million refugees, asylum seekers and internally displaced people all over the globe, forced by violence to leave their homes, according to EMM.

Although EMM receives some money from the Episcopal Church, the majority of its income comes from contracts with the federal government to cover the costs of resettling refugees approved for U.S. entry. Stevenson said 99.5 percent of the contract money directly goes to resettling refugees. The rest of the income is for administrative costs, including all staff salaries. Any unused money goes back to the government.

EMM had announced in April that it would cut its network by six officers in the new fiscal year, in anticipation of a reduction in refugee resettlement under Trump.

Refugees benefit everyone, Stevenson said Sept. 28, “providing a fresh infusion of entrepreneurial spirit and friendship into a country built into a world leader over centuries” by such values.

Also, welcoming people into the United States from other countries is a Christian act, Stevenson reminded Episcopalians. Jesus says in the gospel that the way to him, his grace and his redemption is among the poor, the sick and the stranger.

— Amy Sowder is a special correspondent for the Episcopal News Service. She is also a journalist and editor based in Brooklyn.

The Rev. E. Mark Stevenson, director of Episcopal Migration Ministries, released the following statement Sept. 28 in response to the Trump administration’s decision to reduce the number of refugees allowed annually into the United States to 45,000:

The Administration has reported to Congress that their intent is to set the refugee admissions ceiling for the coming year at 45,000 persons, a cap that is not only the lowest in the history of the program but which also runs counter to the reality of an ever-growing worldwide crisis. At this critical moment, 65.6 million women, children, and men live forcibly displaced by violence from their homes, including 22.5 million refugees who have fled across the border of their homeland to another country into situations often only slightly more sustainable than the horrors they have fled. By the end of this day – and of every day that will follow for some time – more than 28,000 additional persons will find themselves in this predicament. In the face of such a crisis, this cut in our response to less than half the historic average is sad and hard-hearted.

We are thankful, however, that we are now one step closer to fully resuming a program of welcoming refugees to the safety and hope of this land. We live in a time of great hurt, yet also in a time of great promise. These past many months have raised awareness across our great nation of the struggles faced by refugees, and of the benefits to all of us when they find a new life in one of our communities. Refugees have overcome the greatest of trials, and refugees are providing a fresh infusion of entrepreneurial spirit and friendship into a country built into a world leader over centuries by such things. The struggles, and the successes, of these new Americans provide inspiration, opportunity, and optimism for a brighter future for us all.

Jesus, in the parable of the mustard seed, reminds us that even the smallest of faithful acts can grow into something spectacular and transformative. He also instructs us throughout the gospel that it is among the poor, the sick, and the stranger that we will find him, and his grace and redemption. So, we will welcome 45,000 children of a loving God to a better life in this coming year, and pray and work for even more in the years following. And, we will conform our wills to the Divine Will, loving even as Jesus has loved, to the glory of God and the transformation of our own lives.

To learn more about ministry among refugees, or to donate to this work in this critical time, we invite you to visit EpiscopalMigrationMinistries.org.