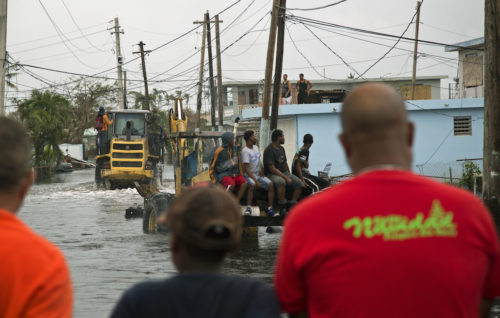 Members of the community of Miñi Miñi use diggers to help get their neighbors out of flooded areas. Loíza is a coastal municipality that was severely affected by Hurricane Maria. Photo: Yuisa Rios/FEMA

But Zorrilla, canon to the ordinary of the Diocese of Puerto Rico, managed to share with Episcopal News Service his experience on the island, which was devastated by Hurricane Maria on Sept. 20 and seemingly cut off from the rest of the world since then.

The most urgent need has been communication. Food, clean water, shelter and gas are desperately needed, too, but there has been little success in sharing those needs so far.

“You’d have to have lived in 1942 to understand what it’s like to live here now. No email, no internet, no phones most of the time,” Zorrilla told Episcopal News Service from his home in San Juan near the diocesan center.

“Puerto Rico is suffering a lot right now. I’m expecting, personally, we’re not going to get electricity for at least six months. It’s a lot of damage. A lot of damage.”

The four-hour wait to get gas was frustrating, but Zorrilla knows there’s much worse. Thousands of people are homeless, he said. A diocesan staff member told him he had to walk five and half hours to check on his parents. They were OK. 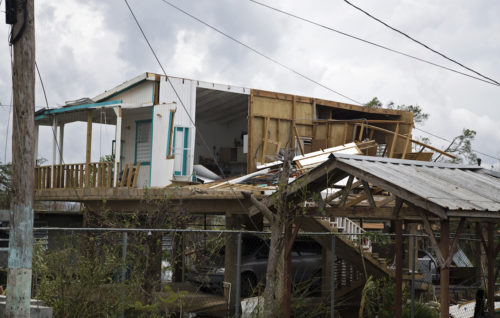 This home in Loíza was destroyed by the strong winds brought by Hurricane Maria. The Category 4 hurricane tore through Puerto Rico on Sept. 20. Photo: Yuisa Rios/FEMA

Hurricane Maria was but the latest in a series of tropical storms to tear through the United States and its territories. The 2017 Atlantic hurricane season has emerged as one of the most destructive in recent history, with hurricanes Harvey, Irma, Jose and Maria causing major damage from Texas to Florida, Georgia and throughout the Caribbean, according to Episcopal Relief & Development.

When Maria slammed into Puerto Rico, it was a Category 4 storm with sustained gusts up to 185 mph, the strongest hurricane to hit the island in over 80 years. Rainfall amounts ranged from 15 to 25 inches, with 40 inches or more in some spots, according to the National Hurricane Center.

“Some bridges and roadways have likely completely washed away,” the center reported.

Once transportation is available, many people could leave the island for good.

The Rev. Tim Nunez, canon to the ordinary in the Diocese of Central Florida, said his area, particularly Osceola County, has seen already a burgeoning Hispanic population, many of whom are Puerto Rican, due to the island’s suffering economy. “We are expecting a massive wave of Puerto Ricans to come to Central Florida,” Nunez said. “With the hurricanes, it will likely accelerate.”

Based on the number of flights scheduled, the Puerto Rican government estimates about 2,000 arrivals a day to the continental United States in the near future once travel opens up, said the Rev. José Rodríguez, interim rector at Iglesia Episcopal Jesús de Nazaret in Orlando.

“It’s going to cause a massive exodus of Puerto Rico,” Rodríguez told Episcopal News Service. “The first wave is going to be children and college students. It’s a very Puerto Rican thing to send your children ahead of you.”

Rodríguez is also the Episcopal chaplain for the University of Central Florida. The school agreed to give in-state tuition to Puerto Rican college students, he said.

The Rev. P. Juan Ángel Monge, priest in charge at All Saints’ Episcopal Church in Lakewood, New Jersey, has a son who lives in Puerto Rico with his partner and 3-month-old baby. On Facebook, Monge pleaded for help getting them food, water and transportation to HIMA San Pablo Hospital in Bayamón, which has electricity from generators, because the baby needed intubation to breathe. The same day, the family made it safely to the hospital, thanks to help from the diocese, clergy, family and others who saw his post and shared it. “He’s now on an oxygen canopy and breathing on his own. Thanks to all, Thanks God, Blessings and Peace!” Monge wrote on Sept. 25.

The Rev. Gladys Rodriguez is a priest at Church of the Incarnation just outside Orlando in Oviedo, Florida. A former actress in Puerto Rico who was ordained in Orlando in January, Rodriguez can minister in the United States and in Puerto Rico. Her husband is on the island, while her daughter evacuated to Orlando prior to the hurricane. One of her church members has a wife and daughters in Puerto Rico.

“The sad story is that people in Orlando who have families in Puerto Rico, which they can’t reach by cell or plane, are desperate. At Incarnation, we try to give them hope by preaching consolation with God’s promises for us,” Rodriguez told Episcopal News Service.

But help is on the way. Some of it was already there or nearby before Maria pounded the island. 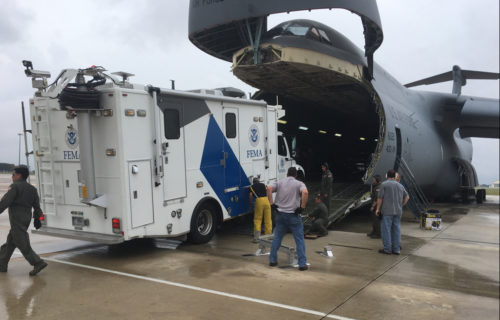 Federal Emergency Management Agency-loaded vessels with more than 1.3 million meals, 2 million liters of water, 30 generators and 6,000 cots were en route to St. Thomas, awaiting port opening and clearance, according to a Sept. 21 FEMA report. FEMA also positioned commodities at its distribution center and warehouse in San Juan, Puerto Rico, before the storm. The items such as meals, water, cots and blankets were ready for distribution to the Commonwealth as requested.

Episcopal Relief & Development also sent emergency support to the diocesan emergency committee ahead of Hurricane Maria in San Juan, knowing communication would crash and systems would be compromised. Authorities delayed the distribution due to the chaos, but permission is expected soon. Episcopal Relief & Development staff members sporadically have been able to text with Puerto Rican diocese members.

Ordained as the Puerto Rican diocesan bishop little more than two months ago, the Rt. Rev. Rafael L. Morales Maldonado formed a plan with diocesan staff, Zorrilla said. During the storm, they boarded up what they could and rode the storm out with their families at home. By Sept. 25, they were clearing the fallen trees at the diocesan center, which has electricity from a generator but no communication capabilities. They met to create an assessment team. They plan to head out Sept. 27 to designated areas on the island, bringing necessities and checking on Episcopal missions, parishes and homes.

“They will bring basic items for parishioners and collect inventories of the needs of clergy and parishioners. Physical damage to churches or structures will also be documented,” Morales wrote in a Sept. 25 letter posted on Facebook, translated from Spanish. “Have much faith, God is with us. Be strong.”

But three nearby Episcopal churches were not so lucky. Their roofs were torn open and rain flooded the interiors. Because of that flooding, Zorrilla and Morales led a Sept. 24 church service in the parking lot of Santa María Magdalena Episcopal Church in Levittown. So far, he hasn’t heard of any clergy or parishioner injuries or deaths, but time will tell as the assessments get underway.

“The sounds were awful, the wind force. What I saw, I never saw before, and we’ve experienced other hurricanes before because we live in the tropics,” Zorrilla said. “This was so huge. The force of nature was amazing.”

On Sept. 26, the last day of the House of Bishops meeting in Fairbanks, Alaska, the bishops unanimously passed a resolution to show their support. The resolution was aimed at not only Puerto Rico but also other areas affected by natural disasters.

“We pledge to take such appropriate actions in our dioceses to educate ourselves and our people about climate change, and to advocate policies and actions to reduce the harmful environmental impacts that have been a factor in the recent storms on ‘this fragile earth, our island home,’ ” the bishops stated in the resolution, quoting from Eucharistic Prayer C in the Book of Common Prayer.

Episcopal Relief & Development has learned a lot, especially post-Katrina, on how to handle this, the Rev. Canon Michael Hunn, canon to the presiding bishop for ministry within the Episcopal Church, told the bishops gathered at the Fairbanks meeting. But it’s safe to say – with Texas, Florida, Georgia, the Virgin Islands, the Dominican Republic, Haiti and Puerto Rico in need – “the system is overwhelmed,” Hunn said.

“This is going to be a long and drawn-out recovery effort, and we’re going to need to all work together,” he said.

Also at the Fairbanks gathering, the Rt. Rev. Eugene Taylor Sutton talked about the companion relationship his Maryland diocese shares with Puerto Rico, a partnership that started about two years ago.

He was hoping to develop that relationship further at the House of Bishops meeting, so he was saddened the Puerto Rican bishop was not able to make it because of Hurricane Maria. The Maryland diocese has been asking its congregations to donate to the relief efforts, and Sutton plans to attend the Puerto Rican diocesan convention in October.

“I want to come bearing gifts, and maybe a big check,” Sutton said.

Monetary donations help the most and can be made through Episcopal Relief & Development’s donation page, which breaks down different donation paths and provides more specific choices. There’s also a section for churches to print bulletin inserts for their congregations to donate.

Zorrilla said many homes are concrete and are hurricane resistant, but he suspects countless homes didn’t make it. It’s hard to tell right now. After the assessments begin this week, they will have clearer idea of what they’re dealing with as a diocese.

An Episcopal Relief & Development representative with extensive disaster experience will arrive on Oct. 2. He will support the diocese in conducting assessments and strategizing about the next phase of the response. As a result of the ongoing infrastructure and communications challenges, he is bringing satellite communications phones and the relevant equipment for stationing around the island.

“Episcopal Relief & Development is working a lot for us. We don’t feel alone. We feel fully supported,” Zorrilla said.

Yet, “prayers are really needed right now and all the help that the church can send us, because we are in real need.”

– Amy Sowder is a special correspondent for the Episcopal News Service. She is a writer and editor based in Brooklyn, New York. The Rev. Mary Frances Schjonberg, interim managing editor, and David Paulsen, editor/reporter, both with Episcopal News Service, also contributed to this report.