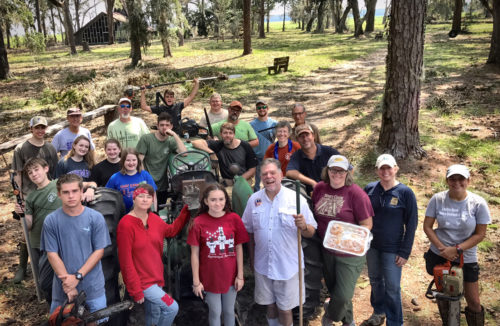 [Episcopal Diocese of Georgia] Some 1,300 people were scheduled to arrive on Honey Creek Retreat Center’s grounds on Sept. 17 for a revival featuring Presiding Bishop Michael Curry. Instead, 30 volunteers from the Diocese of Georgia spent the weekend clearing debris left by Hurricane Irma. 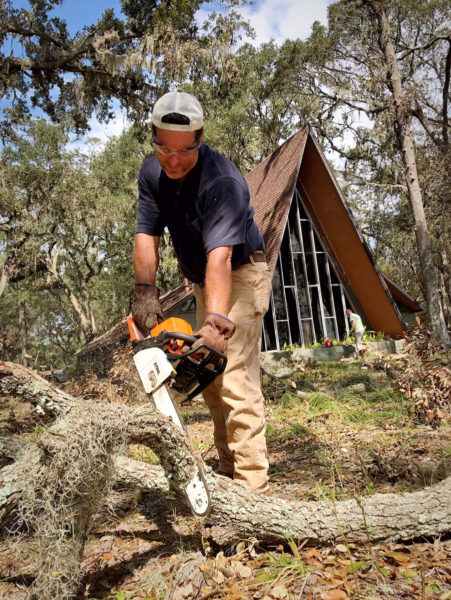 The Rev. Alan Akridge, rector of St. Mark’s Church in nearby Brunswick, cuts a downed tree in front of the Chapel of Our Saviour at Honey Creek. Photo: Frank Logue

There were “five worksites focusing on yard and tree debris cleanup and a kitchen team working to feed everyone,” said executive director Dade Brantley. To give an idea of the scope of the clean-up, last year with Hurricane Matthew there were 23 trees down which equaled 100 metric tons of debris. This year, 67 trees were down with double the tonnage, he said.

“It was grace, straight up grace” that there wasn’t more damage to buildings, Brantley said. He pointed toward the chapel and the remains of two trees which he said “grew up in tandem and died in tandem next to the chapel.”

One could have hit the chapel but it didn’t. He pointed out similar examples at Jonnard Dormitory and the kitchen garden, trees that just missed landing on buildings.

The Revival: Fearless Faith, Boundless Love has been rescheduled for Jan. 20 at Honey Creek. “Good planning, great vendor partnerships and a little bit of luck enabled us to identify an alternative day for the revival,” said Katie Willoughby, canon for administration. “We look forward to an exciting and spiritual event — now with a little cooler weather.”