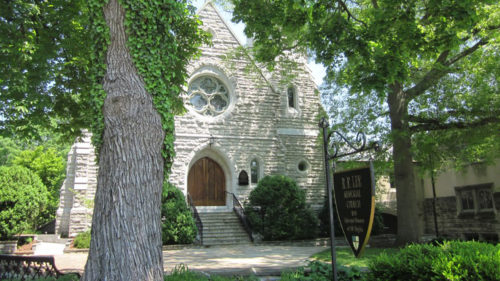 [Episcopal News Service] R.E. Lee Memorial Church in Lexington, Virginia, where Robert E. Lee once served as senior warden will no longer honor the Confederate general in its name.

After two years of tense debate in the congregation, the vestry voted, 7-5, on Sept. 18 to change the church’s name to its previous Grace Episcopal Church. The decision had been backed publicly by Southwestern Virginia Bishop Mark Bourlakas, who spoke to the congregation earlier this month.

“It’s been a costly process both spiritually, financially and emotionally for the congregation, but I’m proud of their work and encouraged by it,” Bourlakas told Episcopal News Service by phone Sept. 19.

The vestry’s past inaction on the name had prompted some to leave the church. Others were steadfast in favor of keeping the name to honor Lee. Episcopalians on both sides of the issue filled the church when Bourlakas spoke there Sept. 7, and they again gave competing views this week before the vestry’s vote.

Violence last month during a white supremacist rally in Charlottesville, Virginia, has amplified the national debate over Confederate symbols in public places, including at Episcopal institutions. For many of those institutions, the debate began two years ago after the massacre at a black church in Charleston, South Carolina, by a gunman with Confederate sympathies.

“It’s been a very divisive issue for two years,” the Rev. Tom Crittenden, the Lexington church’s rector, told the Richmond Times-Dispatch. “But Charlottesville seems to have moved us to this point. Not that we have a different view of Lee historically in our church, but we have appreciation for our need to move on.”

Hate groups chose Charlottesville because of that city’s decision to remove a statue of Lee. Clashes with anti-racism counter-protesters ended in numerous injuries and the death of one counter-protester.

Washington National Cathedral in the nation’s capital responded by removing stained-glass windows depicting Lee and a fellow Confederate general, Stonewall Jackson. Christ Church Cathedral in Cincinnati, Ohio, launched a study of its own memorials to Confederate figures after the dean called for their removal.

Defenders of such memorials have warned against hiding history, and some say Confederate generals displayed heroic qualities despite fighting on the side of the slave-holding South. Those arguments have been countered by critics who rebuke efforts to portray the Confederate cause as noble.

The congregation in Lexington faced the additional challenge of confronting the legacy of a Confederate figure closely tied to its own identity.

Members of Lee Memorial Church spent several months in 2015 discussing the church name in light of the Charleston shooting. After surveying the congregation and hearing a range of opinions for and against, the vestry narrowly voted that November to keep the name unchanged.

Then in 2016, the church hired an outside consultant and formed the Discovery and Discernment Committee of vestry members and parishioners to more carefully pursue reconciliation among the congregation and decide what actions to take.

The committee and consultant issued a 15-page report in April 2017 that summarized the various perspectives on the church’s name and recommended “that the name of the church be officially restored to its former name of Grace Episcopal Church.” The vestry met the same month to review the report and accepted all the recommendations, except the one urging a name change.

The discussion reignited after the violence in Charlottesville renewed questions about whether it was appropriate to name a church after a Confederate general. With members of the vestry still resisting a change, Bourlakas took a more active role in the conversations, visiting the church in late August and coordinating a three-city lecture series on racial reconciliation that kicked off in Lexington on Sept. 13.

The bishop, in recommending a name change, tried to focus the congregation on its Christian mission, which he said should not be hindered by distractions like disagreements over a name or Confederate statues.

“There’s still an amount of healing that will have to take place,” Bourlakas said. “In the long run, I think the church will be stronger and will be a strong gospel witness in Lexington.”