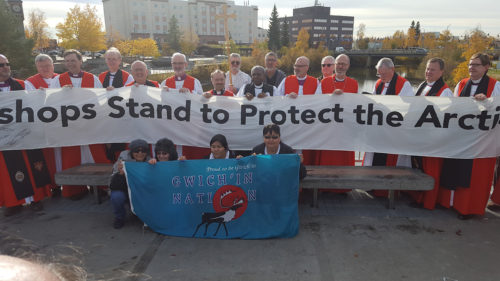 Episcopal bishops gather in downtown Fairbanks, Alaska, on Sept. 23 as part of a day of “prayerful listening” to Alaskan Natives’ stories and of blessing the land. In Fairbanks they displayed this banner from a footbridge as they rallied in support of the Arctic National Wildlife Refuge. Photo: Neva Rae Fox/Episcopal Church Office of Public Affairs

[Episcopal News Service – Fairbanks, Alaska] The Episcopal Church’s House of Bishops approved a letter to the church on Sept. 26 invoking the bishops’ experiences in Alaska listening to the stories of the state’s indigenous people, and they called on Episcopalians to join them in working toward environmental and racial justice.

The letter was the capstone of the bishops’ six-day fall meeting, held in Fairbanks but incorporating a weekend of travel far beyond this small city. Across Alaska’s vast Interior, groups of bishops visited Native communities that are struggling to preserve the subsistence way of life they have followed for thousands of years.

The threats to that way of life are many, though Native residents specifically voiced concerns to the bishops about climate change and the impact of the resource-extraction industry.

“The bishops of the Episcopal Church came to Alaska to listen to the Earth and its peoples as an act of prayer, solidarity and witness,” the message. Alluding to Ephesians 2:19, the message continues, “The residents of Interior Alaska whom we met are not strangers; they are members of the same household of faith.”

The bishops approved the letter in a unanimous voice vote after making several changes to the wording of various passages in the initial draft.

The complete text in English and Spanish is here.

The message includes a call to Episcopalians in all dioceses and congregations to join the bishops in “prayerful listening” in their own communities for the connections between racism, economic disparity and environmental injustice.

“God calls us to listen to each other with increased attention. It is only with unstopped ears and open eyes that our hearts and lives will be changed,” the bishops said in the letter. “It is through the reconciling love of God in Jesus and the power of the Holy Spirit that we and the Earth itself will be healed.” 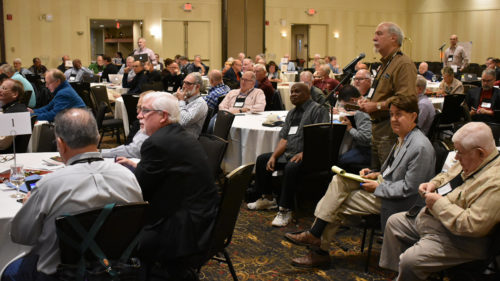 The Episcopal bishops discuss changes to a draft letter to the church on racism, environmental injustice and poverty before voting to approve it Sept. 26 in Fairbanks, Alaska. Photo: David Paulsen/Episcopal News Service

The House of Bishops meeting kicked off Sept. 21 at the Westmark Fairbanks Hotel & Conference Center with a welcome from two Native elders, Will Mayo and Steve Ginnis. Mayo is a past president of the Tanana Chiefs Conference. Ginnis is the executive director of the Fairbanks Native Association.

Sessions on Sept. 22 focused on Native culture, including a conversation with Poldine Carlo, a founder of the Fairbanks Native Association. Gwich’in activists spoke about their efforts to raise awareness of the effects of climate change on Native village life. They also asked for continued support in protecting the Arctic National Wildlife Refuge from oil drilling. The refuge is a major caribou birthing ground and is considered sacred by the Alaskan Natives who hunt the caribou when the herds migrate south.

The bishops spent the third day of their meeting seeking out the stories of village residents across the sparsely populated region north of Fairbanks. Bishops and their spouses broke into eight groups to board small charter planes to Allakaket, Arctic Village, Beaver, Eagle, Fort Yukon, Huslia, Tanana and Venetie. A ninth group drove to a former gold mining site, and other bishops remained in Fairbanks for a procession along the Chena River.

“What does listening to the Earth and its people mean?” the bishops ask in their letter to the church. “For us bishops, it meant getting out and walking the land, standing beside the rivers, sitting beside people whose livelihood depends on that land. We had to slow down and live at the pace of the stories we heard. We had to trust that listening is prayer.”

What they heard were stories of longer summers and shorter winters, of melting permafrost affecting the rivers they fish, of the difficulty in getting food to supplement what they harvest in the wild, and of their concern for the future of the caribou birthing grounds. 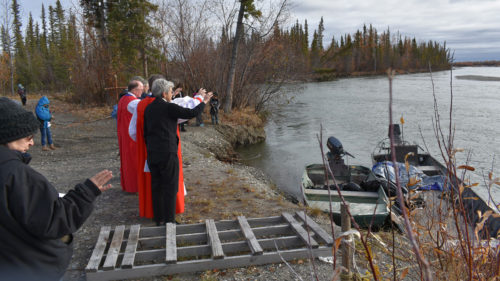 A group of Episcopal bishops joins with residents of Venetie, Alaska, on Sept. 23 to bless the river that runs next to the village. Photo: David Paulsen/Episcopal News Service

Each of those trips on Sept. 23 culminated in the bishops blessing the land, water and people in the 2 p.m. hour. And the next day, the 120 bishops and about 80 spouses gathered in Nenana with members of the local Native community and Episcopal congregation for a festive potlatch dinner, complete with singing, dancing and gifts for the bishops.

The Episcopal Church was once the only Christian denomination with a presence in Interior Alaska, and most of the people the bishops met there on their journeys were Episcopalians. The church also has been active for years on the issues of justice for indigenous people and environmental justice, including the fight to protect the Arctic National Wildlife Refuge.

Presiding Bishop Michael Curry spoke of this history of Episcopal Church activism and the church’s historic ties to Alaskan Native communities in a video summarizing the House of Bishops meeting on Sept. 26.

“While we were here, we met the people, who are Episcopalians, who are faithful, devout people for whom those lands are sacred, and our resolutions and our support and work in Washington to protect that land so that it will not be violated by oil drilling is a sacred trust,” Curry said.

The bishops also unanimously approved a resolution Sept. 26 offering support for the dioceses on the Gulf Coast and in the Caribbean islands that were hit hard by hurricanes Harvey, Irma and Maria, as well as those affected by wildfires in the West.

“We are grieving with you and want to stand with you in the rebuilding of your communities,” the bishops said. “Our House of Bishops is sadly diminished by the absence of those bishops who could not attend this meeting due to these storms.”

That resolution, too, cited the environmental factors behind such devastation and “the relationship between human consumption patterns and global climate change.”

“We acknowledge that we all have a role to play in reducing the impact of our actions that result in the destruction of islands and coastal areas due to more frequent and severe storms,” the bishops said. “We pledge to take such appropriate actions in our dioceses to educate ourselves and our people about climate change, and to advocate policies and actions to reduce the harmful environmental impacts that have been a factor in the recent storms.”

And the bishops heard a detailed update on the talks between the Episcopal Church and the United Methodist Church on entering into full communion.

Bishop Frank Brookhart of the Episcopal Diocese of Montana said the Methodists were expected to vote in 2020, followed by a vote of the Episcopal Church’s General Convention in 2021. Until then, he encouraged Episcopal bishops and congregations to begin developing relationships with their Methodist counterparts.