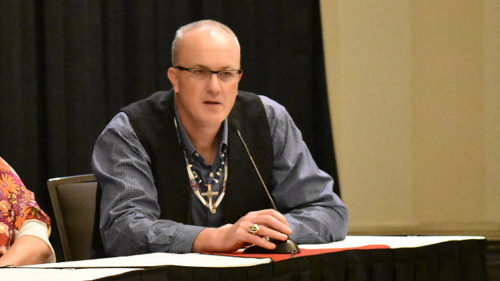 Diocese of Alaska Bishop Mark Lattime, speaking here Sept. 22 at the House of Bishops meeting in Fairbanks, Alaska, is one of six bishops to sign a letter to senators urging opposition to an Affordable Care Act repeal bill. Photo: David Paulsen/Episcopal News Service

The letter, dated Sept. 24, comes as the House of Bishops holds its fall meeting in Fairbanks, Alaska. Diocese of Alaska Bishop Mark Lattime is one of the bishops who signed the letter to senators. One of its recipients is U.S. Sen. Lisa Murkowski, a Republican from Alaska whose vote was seen as crucial for passage of the so-called Graham-Cassidy bill, though on Sept. 25 the bill seemed headed for failure.

“We urge you, Senators, in the spirit of fairness and proper process, to stand up against a bill that would cause such disruption and chaos to healthcare for millions of our citizens, especially the most vulnerable among us,” the bishops say in their letter. “As Christians and as faith leaders in our respective states, we ask that you stand firm on the democratic process that serves us all. Access to such healthcare is crucial to maintaining the social safety net that allows our communities to flourish.”

Senate Majority Leader Mitch McConnell had said he intended to bring the bill to the floor for a vote this week, but those hopes have all but slipped away. After McCain and Sen. Rand Paul, R-Kentucky, came out earlier against the bill, Collins announced Sept. 25 that she, too, would vote against it, seeming to indicate it does not have the 50 votes needed to pass.

The bishops’ letter cites an estimated cut of $23 billion in federal health care spending over nine years in the bishops’ five states. It also singles out part of the legislation that would reverse an expansion of Medicaid under Obamacare, potentially affecting lower-income Americans.

“Our Baptismal Covenant calls us to respect the dignity of every human being,” the bishops say. “It is our responsibility to challenge you, our elected leaders, to work toward justice and equality for the welfare of all people, not only those who can afford health insurance.”

The Episcopal Church has long advocated for policies that support helping Americans access affordable and comprehensive health care based on a long series of General Convention resolutions. Its Episcopal Public Policy Network released a policy alert on Sept. 20 that called on Episcopalians to contact their representatives and ask them to oppose the new legislation.

“The Graham-Cassidy bill lacks the benefits of informed public hearings with experts and thoughtful bipartisan compromises, and does not address the concerns highlighted in earlier ACA repeal efforts,” EPPN’s alert said.

The bill, named after Republican Sens. Lindsey Graham of South Carolina and Bill Cassidy of Louisiana, is the latest in a series of Republican attempts to overturn the Affordable Care Act, President Barack Obama’s signature legislation, which he signed into law in 2010 after its passed Congress with no Republican support.

Murkowski, who was one of three senators to vote against an earlier Obamacare repeal bill in July, hasn’t said yet how she will vote. Republican leaders have added incentives to the new bill targeting Alaska, including a provision that would exempt Native Alaskans from losing Medicaid coverage when the program is rolled back.