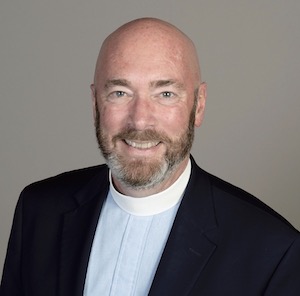 “John brings a rare combination of gifts and experiences to CDSP,” Richardson said. “That includes a deep commitment to the Episcopal Church, a passion for welcoming people and populations that may feel alienated from the church, and substantial expertise in administrative and financial matters acquired as both a lawyer and a priest. I am pleased to welcome him to CDSP.”

Dwyer is in his seventh year as rector of St. Christopher’s Episcopal Church, in Roseville, Minnesota. He is treasurer of the Episcopal Church in Minnesota (ECMN), where he also serves as a member of the Standing Committee, chair of the joint finance and audit committee and president of the disciplinary board. He is a liturgical practicum instructor in ECMN’s School for Formation and has previously served as a trustee and a member of ECMN’s personnel committee.

He will begin work on October 30.

“I am delighted to be joining CDSP’s leadership team at this time of such change in the wider church and in the new and inventive ways her leaders are formed in furtherance of Jesus’ message and mission to the world,” Dwyer said. “I am energized and excited to work with the dedicated individuals striving to secure CDSP’s future through sustainable, responsible, and imaginative uses of the assets and resources of the seminary.”

CDSP, a founding member of the Graduate Theological Union, recently welcomed an incoming residential class of 19 students to campus. The seminary’s low-residency program, founded in 2014, currently comprises 36 students. In 2016, the seminary revised its curriculum to focus on the core Christian concepts of mission, discipleship and evangelism. CDSP also requires Master of Divinity students to receive training in community organizing.

Prior to being called to Minnesota, Dwyer served faith communities in Washington, D. C. and Maryland. He earned his Master of Divinity from Virginia Theological Seminary in 2007. Before attending seminary, Dwyer practiced law in New York City for 18 years, focusing in the corporate insurance and finance areas. He received his Juris Doctor from St. John’s University School of Law in Jamaica, NY, and earned a B.A. from Fairfield University in Connecticut.

Dwyer will arrive in Berkeley with his husband, Ben Riggs, artistic director of the Twin Cities Gay Men’s Chorus, and their 4-year-old Bernese Mountain Dog, Lincoln. From 2002-2007, Riggs was an adjunct faculty member at the Iliff School of Theology, where he directed the Iliff Choir.