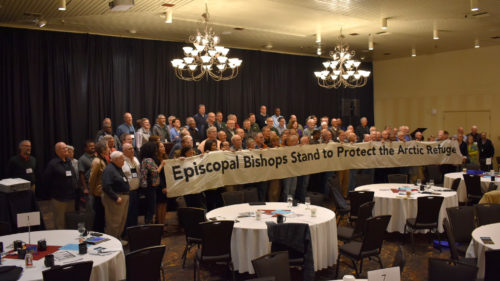 Bishops at the House of Bishops meeting in Fairbanks, Alaska, pose Sept. 22 behind a large sign pledging support for the Arctic National Wildlife Refuge. The sign will be displayed from a bridge in Fairbanks on Sept. 23 during one of several events and trips planned on the themes of creation care and environmental justice. Photo: David Paulsen/Episcopal News Service

[Episcopal News Service – Fairbanks, Alaska] The bishops of the Episcopal Church are gathered in this small city in the center of Alaska’s northern wilderness for their six-day House of Bishops meeting and to immerse themselves in local examples of creation care and racial reconciliation.

There’s no better place than Alaska to discuss themes of environmental and racial justice, Diocese of Alaska Bishop Mark Lattime told Episcopal News Service on Sept. 21 at the midpoint of the meeting’s first day.

“Alaska is your lab,” Lattime said. “This is the laboratory to experience that and see that.”

Two Native elders, Will Mayo and Steve Ginnis, joined Presiding Bishop Michael Curry in welcoming bishops as they kicked off the first morning at Westmark Fairbanks Hotel and Convention Center. Mayo is a past president of the Tanana Chiefs Conference. Ginnis is the executive director of the Fairbanks Native Association.

The meeting will feature discussions of how Alaska’s changing culture is having an impact on the environment and on indigenous peoples’ ways of life, and the bishops will travel over the weekend to visit villages and congregations to hear their stories firsthand.

“Being here in Alaska and listening to and learning from the people of Alaska … helps the word become flesh for us,” Curry told ENS on Sept. 22 after presentations on Native Alaskan culture and natural resources like the Arctic National Wildlife Refuge.

“For the Arctic Wildlife Refuge and the Gwich’in people, protecting land that is sacred to them from development and oil drilling is not just an abstract idea,” Curry continued. “People’s sacred laws and spiritual lives are at stake. And being here, we are experiencing that.”

As the bishops take in as much Alaska experience as they can from Sept. 21 to 26, the sheer scale of the state can be daunting.

Alaska, at two and a half times the size of Texas, makes up a sixth of the United States’ geographic mass. At the same time, it has fewer than 1 million residents, half of whom live in just one city, Anchorage. Most of the state, then, is a mix of relatively untouched wilderness and tiny Native villages that have struggled to maintain their traditions of living off the land. 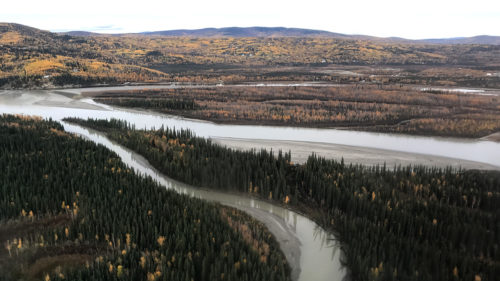 The Tanana River passes below the hills just west of Fairbanks, a city of about 32,000 people in Alaska’s Interior region. Photo: David Paulsen/Episcopal News Service

It’s a state “so vast and unpeopled that if anyone could figure out how to steal Italy, Alaska would be a place to hide it,” the writer John McPhee once said. He described Fairbanks as “the de facto capital of the terrain that is called the Interior … the pivot from which travelers fan out to the north.”

The daunting task of ministering to Episcopalians across such an immense diocese was driven home on the House of Bishops’ first day with a showing of a film produced by the Episcopal Church about Bishop William Gordon, who led the Diocese of Alaska from 1948 to 1974.

Gordon learned to fly so he could pilot his small plane across the state to visit congregations, earning him the nickname the “flying bishop.” The bishops viewed the film about Gordon at the Morris Thompson Cultural and Visitors Center, where Gordon’s plane hangs near the entrance. 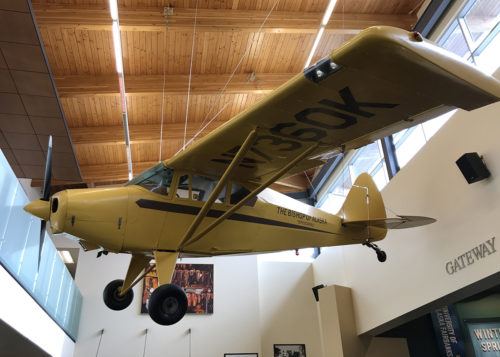 During his long tenure leading the Diocese of Alaska, Bishop William Gordon flew around the diocese in this plane, which now is on display at the Morris Thompson Cultural and Visitor Center in Fairbanks. Photo: David Paulsen/Episcopal News Service

This is the first House of Bishops meeting hosted by the Diocese of Alaska, Lattime said. About 115 bishops are attending, some accompanied by spouses. Former Presiding Bishop Katharine Jefferts Schori, Curry’s predecessor, is joining them in Fairbanks in her new role as assisting bishop in the Diocese of San Diego.

On Sept. 23, small groups of bishops and spouses will split up and fan out to the north to visit the villages of Allakaket, Beaver, Eagle, Fort Yukon, Huslia, Tanana, Venetie and Arctic Village. Arctic Village is on the southern edge of the far northern Arctic National Wildlife Refuge. Protecting the federal refuge from oil drilling has been a priority of both conservationists and indigenous rights activists in Alaska. The Episcopal Church has joined in that activism.

Then on Sept. 24, the bishops will split into three groups, this time traveling to three different Episcopal churches in the Fairbanks area to attend Sunday worship services. The bishops will reconvene as one group that night for a potlatch at St. Mark’s Episcopal Church in Nenana.

A potlatch is a native Alaskan ceremonial meal and event that typically features traditional food, drumming and dancing.

“It’s really the essential form of hospitality,” Lattime said. “Everybody is welcome. Everybody leaves full, and not just in the sense of food.”

The bishops hope to bring together the themes of protecting God’s creation and respecting the dignity of all human beings in sessions Sept. 25 that will identify “ways to take the Alaska Experience home to diocese.”

The House of Bishops meeting concludes Sept. 26 with a business session, Eucharist and closing dinner.

Hurricanes in the Caribbean and on the Gulf Coast of the U.S. have dampened turnout slightly, with three Texas bishops and two Florida bishops remaining in their storm-ravaged dioceses after Hurricane Harvey and Hurricane Irma.

In addition, Bishop Rafael Morales of Puerto Rico canceled plans to attend the meeting after Hurricane Maria struck, knocking out power everywhere on the island. Bishop Julio Holguin of the Dominican Republic also was expected to skip the meeting.

During Eucharist on Sept. 21, Curry offered prayers for the people in those dioceses, as well as the victims of a major earthquake that struck Mexico this week. 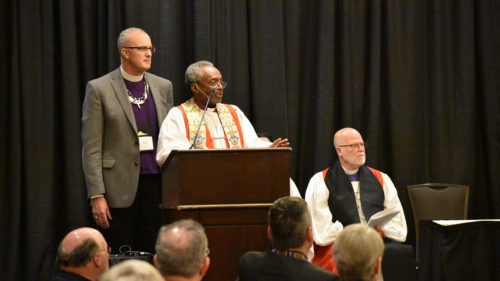 Presiding Bishop Michael Curry presides at Eucharist in Fairbanks, Alaska, on Sept. 21, the opening day of the House of Bishops meeting. Behind him is Alaska Bishop Mark Lattime, and seated to his side is Bishop Todd Ousley of the Office of Pastoral Development. Photo: David Paulsen/Episcopal News Service

The bishops also took a moment at the service to welcome the Rt. Rev. Todd Ousley as the new bishop for the Episcopal Church’s Office of Pastoral Development. Ousley delivered the service’s sermon, calling the bishops “fellow tax collectors and sinners” like the ones Jesus invited to his table.

“In an act of untamed and generous hospitality, we’ve been invited to break bread with Jesus and one another,” Ousley said, preaching on the theme of hospitality. “A ministry of episcopal hospitality is a work of justice as well as generosity.”