[Episcopal News Service] Some 125 Episcopal Church bishops signed a full-page ad that ran Sept. 21 in the New York Times, imploring President Donald Trump and member of Congress not to end the Deferred Action for Childhood Arrivals, the program known as DACA. 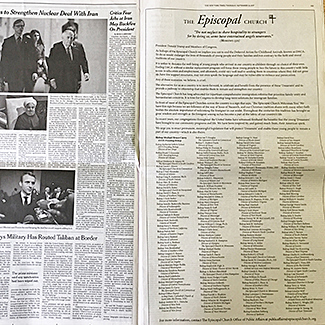 The Rev. Richard Witt, executive director of Rural & Migrant Ministries, brought the idea to the Rt. Rev. Lawrence C. Provenzano, bishop of the Diocese of Long Island. His diocese is among, if not, the most diverse in the church, in part because Queens, New York is the most diverse county in nation.

“The prayer book is in 13 different languages in our diocese,” Provenzano told Episcopal News Service. “This is in defense of the people in our pews and in our neighborhoods.”

Starting with Witt and Provenzano, then adding three other bishops, they organized the declaration and after Curry agreed, they sent an email through their list serve to all bishops with a deadline to sign on. It’s unclear the reason some bishops didn’t sign the statement, but if it wasn’t about avoiding controversy, it could have been as simple as not noticing the email in time to make the deadline.

“I heard from bishops up until Tuesday morning, and it was submitted to the New York Times Tuesday (Sept. 19) afternoon,” said Denise Fillion, Long Island’s diocesan director of communications. Fillion helped with the final edits on the ad.

The bishops said ending DACA without a similar replacement program would force so-called “Dreamers” to “face the future in this country with little access to education and employment, and ultimately, could very well lead to sending them to countries where they did not grow up, have few support structures, may not even speak the language and may be vulnerable to violence and persecution.”

“Any of these scenarios, we believe, is cruel,” the bishops wrote.

The administration announced Sept. 5 that it would phase out the DACA policy, giving Congress six months to act legislatively to save the program that allowed qualifying undocumented immigrants who came to the United States as children to remain in the country.

Naysayers might call this is another example of Episcopalians entering into politics too much, said Provenzano. It’s not about politics, although this public stance has “significant implications,” he said.

“At times, the teaching and preaching of the gospel can look like it’s making a political statement when it’s really about following the teachings of Jesus. This is what bishops are supposed to do. This is nuts and bolts,” Provenzano said. “It’s not a debatable issue. The kind of protectionism being promulgated in this country is contrary to the gospel.”

The Episcopal Church’s presiding officers, Curry and House of Deputies President the Rev. Gay Clark Jennings, issued a statement after the Trump administration’s announcement, vowing to work for immigration reform and to support Dreamers.

The Episcopal Church’s Office of Government Relations, as well as its Episcopal Public Policy Network, has long been engaged in advocacy for “a humane and proportional immigration system,” based on the General Convention’s stance on the issues involved. The office has a collection of resources for advocacy and action on immigration policy, as well as information on current policies and proposed legislation.

“In recent years, our congregations throughout the United States have witnessed firsthand the benefits that the young ‘Dreamers’ have brought to our community programs and life,” the bishops wrote. “We have been inspired by, and gained much from, their American spirit. We urge you to enact permanent, meaningful legislation that will protect ‘Dreamers’ and enable these young people to remain a part of our country — which is also theirs.”

The complete text of the ad is here.