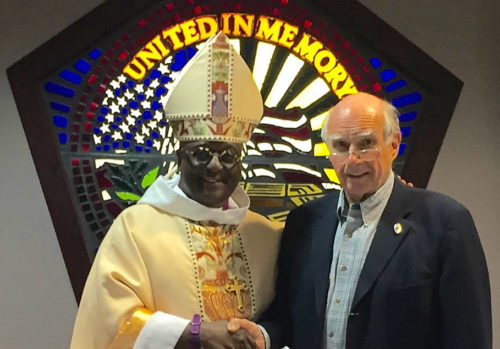 [Episcopal News Service] On Wednesdays at 12:30 p.m., a tour group can often be seen walking through one of the corridors close to the Pentagon Memorial Chapel, the exact site where American Airlines Flight 77 crashed into the Pentagon on Sept. 11, 2001. Beyond the view of tourists, Pentagon Episcopalians gather for a weekly service that has been held in the building for nearly 30 years.

The Pentagon Episcopalian Community is among the most highly visible of the military’s Episcopal worshipping communities, said the Rt. Rev. Carl Wright, bishop suffragan for armed forces and federal ministries. Until he retired as a Department of Defense contractor in May, John Symons was one of the most dedicated and longest-serving members of this community, Wright said.

As a volunteer layperson, Symons was a Distinctive Faith Group Leader (DFGL) for more than 20 years. “In my 30-some years as an active duty chaplain, I can honestly say that John Symons was the most dedicated DFGL that I have seen,” said Wright, a retired U.S. Air Force chaplain. When there is no chaplain present for a military community, DOD grants endorsing agents such as Wright the authority to name a faithful layperson — a so-called DFGL — to lead a congregation in order to meet the faith needs of soldiers and their families.

Symons was a U.S. Air Force lieutenant colonel when he retired in 1982. He became a contract employee in 1997 for DOD’s Acquisitions, Technology and Logistics systems engineering office. A native of Chevy Chase, Maryland, he and his wife Susan belong to St. John’s Norwood there.

Symons has held numerous leadership positions in his church and in the diocese, including as a convener of Region 3 in the Diocese of Washington. He serves on Wright’s chaplain selection board. “He is, in every sense of the word, a church leader,” Wright said. 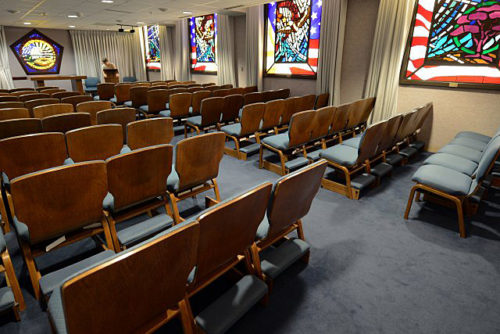 The Pentagon Memorial Chapel is built at the exact site where American Airlines Flight 77 crashed into the Pentagon on Sept. 11, 2001. The chapel includes a stained-glass window with 184 pieces of red glass, representing each of the victims killed when the plane struck the Pentagon. Photo: U.S. Army

Before the Pentagon interfaith chapel was dedicated in 2002, an Episcopal service was held in a conference room in the building. The group has met every Wednesday, at noon, since Lent 1987, joining a military chaplain or local priest for the celebration of the Holy Eucharist. “It had been functioning as a small Episcopal service once the Reagan administration opened up federal buildings to religious services on off-duty hours, including lunchtime,” Symons said.

Symons describes himself as serving through the years as an assistant lay leader to the Pentagon community, preferring to defer the role of lay leader to a more senior civilian government employee or military officer. In addition to developing a written history of the community, he maintained an email list of 90 lay members and 30 others who were clergy or parish administrators.

Others are quick to point to his role as pivotal.

“I’m not sure that community would have existed without John to be honest,” said U.S. Navy Capt. Jerome Hinson, fleet chaplain, U.S. Fleet Forces Command, who previously served in the Office of the Secretary of Defense as executive director of the Armed Forces Chaplains Board.

“People in the military are so transitory,” Hinson said. “For a community like that — which is vital by the way because it creates the opportunity for folks to worship, to have a sense of belonging and connectedness, and create meaning and purpose and to better walk the life of faith — for a community like that to exist over the years takes a relentless determination by those who are there more than a year or two to take up the challenge and mantle of leadership to make it happen.”

The community builds “the web of support among military and civilian clergy who can bring the sacramental mysteries of our faith into the particular [context] that is the Pentagon,” Hinson said. “And … to build/develop future leaders who will become present leaders when the time comes to pass the baton. John has done all those things with magnificent grace.”

Wright agreed. “John’s ministry was a sterling example of several such congregations that this episcopacy has had since World War II,” he said, citing examples such as Fort Meade, Maryland, Fort Leavenworth, Kansas, and U.S. Army Garrison Yongsan in South Korea. The largest and oldest is the St. Alban Episcopal Service in the Kapaun Chapel at Ramstein Air Base in Germany, said Wright.

While active duty, Symons took part in different Episcopalian worship communities, including Anglican churches while stationed in Bangkok and Tehran. When stationed at Ramstein, he belonged to the St. Alban Episcopal Service.

Wright and Symons met in Germany in 1980 at the annual Episcopal European Military Family Conference in Berchtesgaden, Germany. Wright was an airman with “barely two years in the service,” he recalled. “There’s a famous photo of John and me holding our German beer steins in our hands and I am pointing to my senior officer, John, with a deliberate index finger as if I am trying to tell him what to do, and I was 20 years old. So, he and I have had many laughs about over the years,” Wright said.

The Pentagon Episcopal Community attracts many people, particularly since the tragedy of 9/11, Wright said. The chapel includes a stained-glass window with 184 pieces of red glass, representing each of the victims killed when the plane struck the Pentagon.

Symons recalls being one of only two lay members of the community to attend the weekly service the day after 9/11. They read the Great Litany from the Book of Common Prayer. The Eucharist was celebrated at services in the weeks immediately after the attack, despite tight security that created challenges for bringing local clergy into the Pentagon, Symons said.

“John Symons has the values of a generation that do not exist anymore, and those values are … loyalty and fidelity to those things that you hold dear and such values are almost lost to us now that we are living in an age, if I may be harsh, of ‘what is in it for me.’ I see that as a kind of age that we live in,” Wright said. “John is, in a sense, from another, nobler time.”