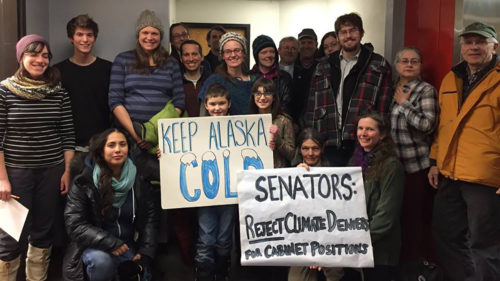 [Episcopal News Service] The Episcopal Diocese of Alaska is working with a grassroots group called Fairbanks Climate Action Coalition to educate communities about renewable power sources and to empower native Alaskans and other residents to speak out on issues related to climate change.

The Episcopal Church’s United Thank Offering, or UTO, program awarded the diocese a $5,000 grant this year to support the coalition and its efforts, which still are gaining momentum three years after a small group of activists began collaborating on these issues.

“In the last year, they have just had some incredible energy in sort of developing this ecumenical community organizing around the issue of sustainable energy and sustainable environment,” Bishop Mark Lattime said in a phone interview with Episcopal News Service.

The diocese’s office in Fairbanks has just three staff members so Lattime said the way for the church to live out its baptismal vow to care for God’s creation is to rally behind the good work of active citizens and Episcopalians at the local level.

Members of the Episcopal Church’s House of Bishops will learn about these and other related efforts when they meet in Fairbanks, beginning Sept. 21. As host, Lattime is emphasizing the themes of creation care and racial justice for indigenous people. Those two themes are closely related, he said.

“My vision of this was to be honoring our Native folks and their concerns for the care of creation. They’re the ones – folks who live closest to the land, folks who have depended on a subsistence lifestyle for centuries – those are the ones who are affected by climate change most significantly,” he said.

Lattime spoke about the challenges and joys of ministry in Alaska in a series of videos here.

The bishops, who meet from Sept. 21 to 27, will spend a day visiting Native villages in the Interior. They will listen to villagers’ stories and then bless the land, water and other natural resources.

The House of Bishops meeting also will feature a presentation on indigenous Alaskan culture. One of the presenters will be Princess Johnson, a Fairbanks resident of Gwich’in heritage who was one of the founders of Fairbanks Climate Action Coalition. She also was a member of the Episcopal Church’s delegation that traveled to Paris in December 2015 for the 2015 United Nations Climate Change Conference, also known as COP21.

“We need to recognize our connection to our Mother Earth and our role in being really protectors, and also that we can’t live without clean air and water and land and we need to ultimately transition off fossil fuels,” Johnson told ENS.

She said the Fairbanks Climate Action Coalition originated in conversations she had with other Alaskans she met in September 2014 at a Fairbanks rally in solidarity with the People’s Climate March in New York City. Those conversations turned to the concrete steps they could take locally to fight climate change, and in November 2015, the coalition was born.

It further gained steam after a climate accord was reached at COP21. Local activists felt an additional sense of urgency this year after President Donald Trump said he would withdraw the United States from the Paris climate accord, Johnson said.

The coalition has created several working groups to lead efforts such as renewable energy and interfaith collaboration. Coalition meetings and training sessions now typically draw several dozen environmentally minded residents of the Fairbanks area. Education is a big emphasis, and the coalition is eager to expand that work with the help of the $5,000 UTO grant.

“There’s been a long history, I think, of the Episcopal Church being ahead of the curve and forward-thinking in terms of really being caretakers and emphasizing that we are all caretakers of God’s creation,” Johnson said.

Some of the trainings offer guidance for using solar, wind and other renewable resources for energy. The coalition also is training residents of the Fairbanks area to be politically active on these issues in the face of some distinctly Alaskan hurdles.

Alaska’s great size – that vast expanse of northern forests, mountains and far-flung cities and villages – poses political challenges, especial for Alaskans living in native villages. Adding their voices to debates on oil drilling, clean water and wilderness preservation isn’t as easy as hopping in a car and driving to the statehouse. Alaska’s capital, Juneau, isn’t even reachable by road, and flights across the state can become cost-prohibitive.

The Fairbanks Climate Action Coalition has found success in organizing trips to Juneau for members. Last year, it cobbled together enough donations to fly a 14-person delegation more than 600 miles to the state capital to meet with lawmakers and voice their opposition to a state resolution supporting opening the Arctic National Wildlife Refuge to oil drilling.

Johnson said such face-to-face interaction is effective in conveying to lawmakers how environmental issues have a direct impact on indigenous people’s ability to live off the land and protect their way of life. The coalition hopes to be able to organize more such trips in the future.

The coalition and the diocese also are careful not to vilify the oil industry. The economic reality is that the oil industry dominates the state economy. The coalition instead talks of a “just transition” toward a new economic model and away from the use of fossil fuels that is making climate change worse.

“Their hope is slowly, bit by bit, to get interior Alaska transitioned to using alternative forms of energy production, even at the village level,” Lattime said.