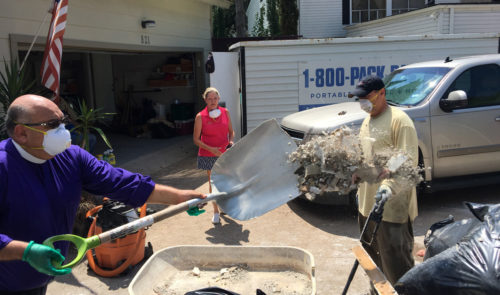 [Episcopal Diocese of Texas] As the Diocese of Texas continues an energetic response to relief efforts after Hurricane Harvey’s punishing rains, churches and volunteers from across the country have offered help. Within the diocese, congregations have sent teams to muck out homes and church buildings, helping both neighbors and strangers.

The Ven. Russ Oechsel, diocesan disaster coordinator, met Crystal while he served as chaplain at one of Houston’s emergency shelters. A day later, Crystal called him desperate for help, and Oechsel met her in a parking lot to give her a couple of gift cards to meet her immediate needs. Her gratitude mixed with tears.

Thom’s sister called the Diocesan Center because someone at a Houston Christian radio station told her she could find help for her elderly brother there. Episcopalians moved Thom’s flooded personal belongings to the curb so the landlord could begin cleaning out the apartment. The relief in Thom’s voice was palpable.

Yet, there are many areas of Houston that have yet to see work crews or to find hope in the silt on their buckling floors or in the mold growing up their walls. And, in many towns to the south and east of the city, flood waters are still draining.

The Rev. Stacy Stringer offered space at Holy Trinity Episcopal Church in Dickinson to the local United Way agency when its food pantry and offices were submerged in Harvey’s rains. The agency was up and running within a few days after the storm, with church members helping to staff the much-needed food pantry. Two dozen U.S. Coast Guard members from out of state found a place to sleep for the night in the parish hall before they were released to go home, and Stringer even found them rides to the airport. There isn’t a rental car to be found for hundreds of miles. Dickinson’s Lutherans will worship alongside Episcopalians at Holy Trinity until their church can be repaired.

In southwest Houston, Iglesia Episcopal San Mateo flooded, as did the homes of many of its members. No one can enter the sanctuary; it’s just too toxic and will require professional remediation to finish what faithful parishioners began to clear out.

San Mateo’s rector, the Rev. Janssen J. Gutierrez, his wife Mariely and their two teenagers lost everything in their ground floor apartment to floodwaters. Today they are living on the second floor of their complex, ministering to parishioners and contending with insurance adjusters to repair the church building and offices.

Gutierrez, who has been rector of San Mateo for little more than a year, said that many of his members are undocumented and, therefore, have no access to state or federal relief. Christ Church Cathedral, Houston, covered the cost of a tent under which the San Mateo congregation will worship for the next month or so, and Christ Church Cranbrook in Michigan has offered to strike up a long-term relationship.

Mission teams from St. Alban’s, Waco, traveled four hours southeast to help clean out Holy Comforter in Spring and rector Jimmy Abbott’s home as soon as the rain subsided. Abbott was then able to turn his attention to parishioners and neighbors who were dealing with the same huge losses.

“We are supporting our clergy and our churches so that they are able to do local ministry,” said Bishop Andy Doyle. This isn’t his first rodeo. Hurricane Ike hit the Diocese of Texas in the months between Doyle’s election and consecration. He sees a robust rebuilding response over the next year, tapering through the following two to three years as needs are met.

“This is our mission field,” said Karen Wynn, indicating the neighborhoods around Good Shepherd, Friendswood. With debris piled high in front of homes on streets radiating away from Good Shepherd, Wynn, the rector’s wife, was upbeat about helping the community. While the offices and Sunday school rooms were flooded, the parish hall and church remained high and dry. Volunteers already had a whiteboard up and had triaged almost 20 parishioners’ homes to clean out and had five teams working within a day of the storm.

Members of St. Andrew’s, in Houston’s Heights, sent teams of people into the neighborhoods to “listen” and check in on their neighbors. They fielded several parishioners to unload $50,000 in donations from McMath Construction in Louisiana. Asked why he brought so much, Don McMath said: “Honestly, we were so busy during Katrina working, we couldn’t do any of this, and it’s bothered me for 12 years. I didn’t want to miss the opportunity to pay back.” The McMath company also brought jambalaya for 500 people and fed people at Gallery Furniture and Iglesia Episcopal San Pablo in Houston before returning home.

Northeast of Houston in Atascocita, members of Christ the King Episcopal Church helped six families in the congregation clean up their houses after they flooded. The work included gutting interiors and doing laundry.

“On the first Sunday after the storm, I was going to drop off supplies to one of our families,” said the Rev. David Nelson, rector at Christ the King. “As an afterthought, I asked if the family wanted Communion. The mother responded by tearing up, which was all I needed to know.”

They celebrated Eucharist on a cooler full of sandwiches and water on the back porch of the house that was flooded with more than 3 feet of water. “The symbolism was powerful. We were feeding people spiritually on top of a cooler, the contents of which literally feed people,” Nelson said. “The participants were also struck by how it reminded them of God’s presence, even in the midst of the mud and muck, tragedy and loss.” 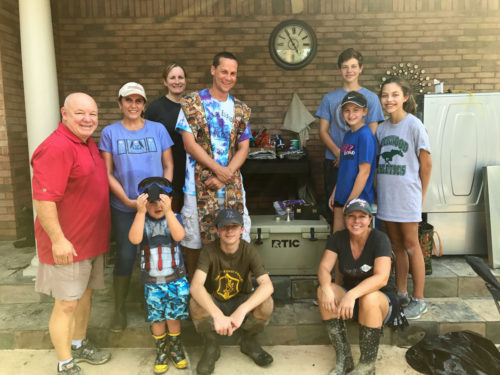 The Rev. David Nelson, rector at Christ the King Episcopal Church in Atascocita, joins a family for Eucharist on the family’s back porch. Photo: Christ the King

Local diocesan response to Harvey is supported by Episcopal Relief & Development with funds and expertise. “Their extensive experience has been invaluable,” Oechsel said. Many clergy expressed gratitude for video training during the immediate aftermath of the storm. The diocese had spiritual care teams at shelters and neighborhoods almost before the five days of relentless rain stopped.

The Rev. Lacy Largent continues to coordinate lay and clergy who are interested in joining teams who will listen to flood victims and offer gift cards and further help where needed, connecting people to resources in the church and community. Some churches have sent teams into their neighborhoods just to listen to people affected by the flooding.

The scene on Jan and Susie Bromley’s street in Orange could have been seen in Katy, Richmond, Bellaire, Beaumont, Vidor, or many other southeastern Texas communities. Breakfronts that once held heirloom china piled atop soaking carpet and stacks of bent hardwood or parquet flooring piled at the curb. Leather recliners tilted over dining room chairs and dressing tables, children’s stuffed animals and piles of clothing already covered with mold. Then, the wet sheetrock lay on top of it all — a varmint’s dream condominium on street after street.

Jan is fighting liver cancer and he is in a wheelchair. As the water rose to the windows, Susie called her grandsons to help move Jan upstairs in the house next door. “I didn’t know if we were even doing the right thing,” Susie said. “He collapsed when we got there finally, and we had to be rescued by boat.” The Bromleys lost both cars in the flood, so the rector of their church loaned them his truck to get to Jan’s chemo treatments.

Standing in Susie’s living room, the exposed studs revealed the hall and bedrooms beyond. Fans and a dehumidifier created a din. Tears streaming down her face, Susie hugged Bishop Suffragan Jeff Fisher, who came to visit and pray with the family.

Moments of grace abound. They take the form of a circle of prayer or a truck from Pennsylvania filled with pallets of water, food and diapers. There’s the perfect pair of jeans for the man who has no clothes but the ones on his back.

The Rev. Steve Balke, rector of St. Stephen’s, Beaumont, carried his son’s air mattress to his car, the superhero sheets flapping in the breeze. Balke has been sleeping on the floor in his office for a few days. 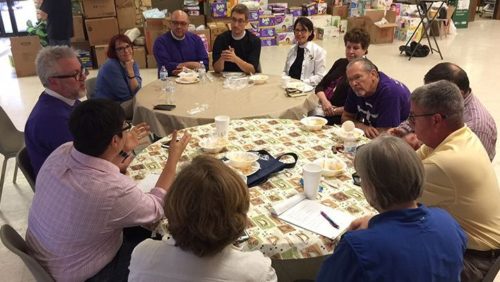 An Episcopal Relief & Development Partners in Response team meets at St. Steven’s Episcopal Church in Beaumont with members of the Diocese of Texas. Partners in Response team members are experts who travel to impacted communities in the United States and help diocesan and congregational leaders through the stages of long-term disaster recovery. Photo: Eric Moen/Episcopal Health Foundation

The distribution center at St. Stephen’s is capably run by parishioners, several whom have nothing left to go home to. Their sofas are submerged, their photos are still floating somewhere between the bookshelves and the hall bathroom, the pots and pans are collecting silt beneath the toxic water in the kitchen corner.

As supplies continue to ebb and flow, one truck arrived with water and another with more diapers, the floodwater slowly drains in the surrounding fields. Another truck arrives with donations gathered by Hoffpauir Auto Group in Lampasas, another Texas town, about five hours’ drive from Beaumont.

The sun is out, and Texans watched the news from Florida as they continue to respond as the Gospel would have us do.

— Carol E. Barnwell is Diocese of Texas director of communication.