[Episcopal Church Office of Public Affairs] Darvin Darling has been named the Episcopal Church Director of Information Technology, a member of the Presiding Bishop’s staff. 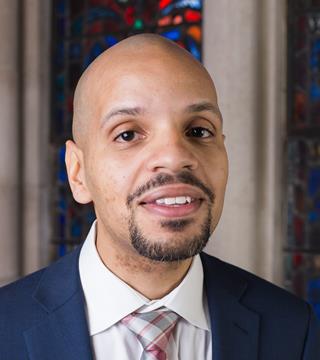 Smith, Episcopal Church Chief Operating Officer, in making the announcement. “He’s smart, thoughtful and at least three steps ahead when thinking about what the church needs from technology to build up the Jesus Movement.”

“At my core, what has always mattered most to me are the values of kindness, compassion and being in service to others,” Darling said.  “When I decided to move on to a new opportunity, I felt that the Episcopal Church best modeled the ideals of what I felt would continue to advance that commitment. It has been and continues to be a beacon of hope and an organization which provides services to the least among us.”

In his new position, Darling will report to the Chief Operating Officer and will be responsible for all the information technology operations for the Episcopal Church Center and the staff located in NYC and remotely.

Meet Darvin Darling
Darling is a native of Brooklyn, NY, and at age 15 he began designing computer systems and programs for his high school robotics competitions at Brooklyn Technical High School.

Most recently Darling was the Director of Information Technology and Technical Services at The Riverside Church in NYC. In this role, Darling was charged with providing the design, implementation, rollout, training and support of all technology systems and technical teams, including live event and post-production of audio, video and lighting.

Prior to joining Riverside, Darling was the Senior IT Manager & Application Developer at City Harvest Inc. where he was responsible for the implementation, management and direct hands-on administration of all IT systems as well as the development of systems which were core to the delivery of food to hundreds of shelters and soup kitchens around the city

In his spare time Darling volunteers helping many small not-for-profits embrace the cloud and open source for infrastructure.

He is a graduate of the New Jersey Institute of Technology with degrees in Computer Engineering and Industrial Engineering.

He begins his new position on September 18. Darling’s office will be located at the Episcopal Church Center in New York City; as of September 18, he can be reached at ddarling@episcopalchurch.org.