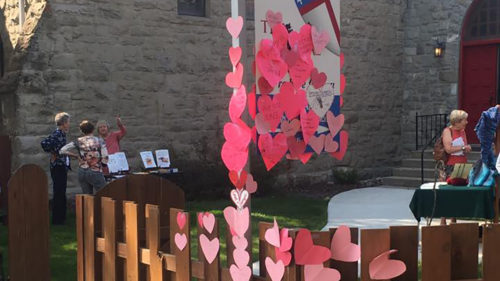 The congregation at St. James Episcopal Church in Bozeman, Montana, covered up swastika graffiti on a church sign with messages on pink paper hearts. Photo: St. James via Facebook

[Episcopal News Service] Hate symbols showed up seemingly overnight as graffiti on the sign in front of St. James Episcopal Church in Bozeman, Montana. By the next morning, on Sept. 10, parishioners had reclaimed their sign with messages of love.

The center of the sign, on which someone scribbled a swastika in black, is now covered with hope-filled words scrawled on pink paper hearts that were stuck to the sign as the congregation poured out of the Sunday service at St. James.

“We commit to resist racism and bigotry,” reads one of the hearts.

Police are investigating, but it remains unclear why St. James was targeted for the vandalism, the Rev. Connie Campbell-Pearson, a deacon at the church, told Episcopal News Service in an interview. The congregation is known for its progressive stances on social justice issues, she said, so it could have drawn the unwanted attention of hate groups. But the graffiti also could simply have been the work of a disgruntled homeless person.

She was more certain of the Bozeman community’s ability to rally together after attacks like this, and that is what has happened at St. James. 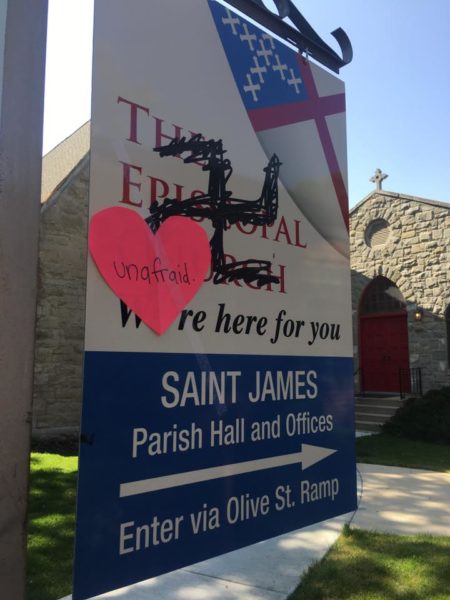 A neighbor was the first to put a pink paper heart on the sign that was vandalized at St. James Episcopal Church. Photo: St. James via Facebook

Campbell-Pearson was helping to lead a diocesan school for deacons at St. James on Sept. 9 when she learned of the vandalism outside. Some neighbors had noticed it earlier that morning and began calling and leaving messages with church leaders, who then notified police.

One of the neighbors who saw the graffiti decided to put up the first pink heart, which bore a single word: “Unafraid.”

As TV crews responded to report on the vandalism, neighbors and parishioners added more hearts to the sign, Smith said. The media attention may have helped drive up attendance at the next day’s Sunday service, which already was expected to be one of the biggest of the year because it coincided with the parish’s annual ministry fair.

Building on the previous day’s spontaneous show of support, some members of the congregation brought pink hearts and markers to the service and handed them to worshipers on their way out of the church so they could add their messages of love to the sign.

“It gave people a real sense of being able to do something that was right and proper without being angry,” Campbell-Pearson said.

As of Sept. 13, the graffiti remained on the sign – a swastika over the words “The Episcopal Church” and the number “666” on the sign post. The congregation expected to remove the symbols sometime in the next week.

The church has been hit by vandalism in the past, though there wasn’t any immediate indication the recent attack was related.

Flowers in a barrel planter outside the church were damaged about two months ago. And last month, when the church added a new sign out front with the message “We’re here for you,” the sign was stolen mere days later.

That sign was replaced about a week ago before it was vandalized over the weekend.

“Pray that the very confused perpetrator may be delivered of their anger and confusion,” the church posted on Facebook in the afternoon on Sept. 9.

Smith said if the graffiti can’t be removed, donors have offered to pay for a new sign.

“I also applaud the people of Bozeman who graciously displayed their support for the parish and their disdain for statements of hatred,” Brookhart said. “As people who have been baptized into the death and resurrection of Christ, we need to die to racism, hatred, bigotry, and rise in newness of life to love of God and love of neighbor.”