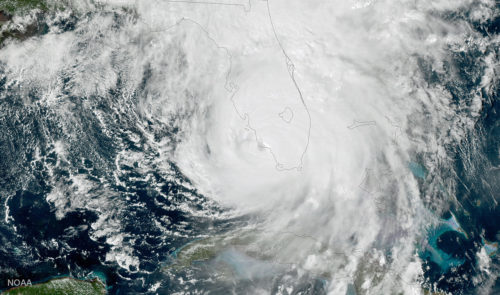 Hurricane Irma makes a second landfall near Marco Island, Florida, in the afternoon of Sept. 10. After making landfall at Cudjoe Key at 9:10 a.m. EDT, Irma made a second landfall on Marco Island at 3:35 p.m. A wind gust of 142 mph was reported at the Naples airport just to the north, according to the National Weather Service. The entire state of Florida felt Irma’s winds and rain. Photo: NASA GOES-16 satellite

[Episcopal News Service] The Very Rev. Stephen Morris welcomed 14 guests into his family’s home in St. Petersburg, Florida, for a sleepover as Hurricane Irma uprooted trees, tore off branches, downed a power line and cut off electricity and hot water on his street.

Meanwhile, Morris, a visiting Swiss couple and local friends who were in mandatory evacuation zones were protected in the home on high ground covered with corrugated steel hurricane shutters.

“We sat in there for 24 or more hours, with no outside light; it’s like you’re stuck in a casino in Vegas,” Morris said with a laugh.

“Now the big cleanup starts. It’s a mess,” he said. “But it’s not as bad as it could’ve been, and we’re grateful.” 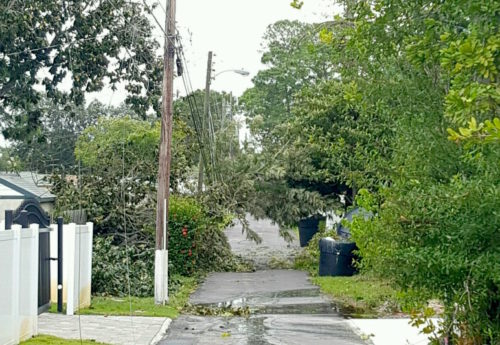 A tree fell on a power line and knocked it down on the street where the Very Rev. Stephen Morris, dean of the Cathedral Church of St. Peter, lives in St. Petersburg, Florida. He sheltered 14 visitors as Hurricane Irma crossed the area overnight between Sept. 10 and 11. Photo: Stephen Morris

The Cathedral Church of St. Peter in St. Petersburg, where Morris is the dean, still has power, likely because it’s next to city hall, he said, but it has a few leaks and debris. Like many Episcopal churches across the state, the cathedral canceled its Sunday service Sept. 10, but the Rev. Katie Churchwell, canon for community outreach, led an online service on Facebook. Most of the staff and clergy evacuated, so there will only be a skeleton crew there Sept. 12. Morris expects usual business to resume by Sept. 14.

The Caribbean islands south of the Florida peninsula did not fare as well.

Hurricane Irma’s death toll in the Caribbean stands at 36, including 10 in Cuba, according to the Associated Press. One death in Florida was linked to the storm as of midafternoon Sept. 11, the news service said.

Irma was a Category 5 hurricane when it pulverized parts of the Leeward Islands on late Sept. 5 into Sept. 6. It decimated Barbuda with its 1,600 residents before turning to St. Martin and St. Barthelemy and going past Anguilla. The storm then lashed Puerto Rico and the Virgin Islands, and later the Dominican Republic and Haiti, all places with Episcopal Church congregations. Information about the status of those churches is trickling in.

In the U.S. Virgin Islands, a report on the Diocese of Alabama’s website shows that Irma heavily damaged St. Ursula’s Episcopal Church on the island of St. John. Meanwhile, the Rev. Gregory Gibson, rector of St. John’s Episcopal Church on St. Croix, the oldest parish in the Virgin Islands (founded in 1760) reported that the historic Gothic church was not damaged, though they were without power for Sept. 10 services. 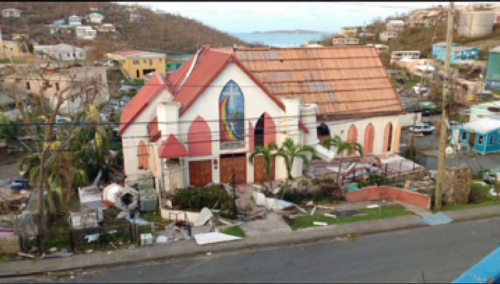 The Rev. Ian Rock, rector of St. George’s Anglican Church on Tortola in the British Virgin Islands, said that supplies, food and water may become limited as some have looted the stores in town. Two Anglican schools on Tortola are mostly in good shape, and Rock opened his parish as a shelter for over 100 people, the report said. The Diocese of Alabama has a companion diocese relationship with the Episcopal Diocese of the Virgin Islands, which encompasses both the U.S. and British Virgin Islands.

Episcopalian Yvonne O’Neal was in Virgin Gorda in the British Virgin Islands when Irma hit. She reported via Facebook that the islands suffered severe destruction and need food and water and assistance.

“I have never seen such devastation in my life. Irma razed these islands to the ground,” she wrote later during the afternoon of Sept. 10. “Rich and poor are homeless. Many are hungry. We thank God for life.”

Irma dropped to a Category 3 range on Sept. 9 and 10 as it passed between the north coast of Cuba and the Bahamas.

“We are without electricity, in the dark, only trusting in God. We feel the wind howling. People are scared,” the Rt. Rev. Griselda Delgado del Carpio, bishop of the Episcopal Church in Cuba, said in a blog post written at noon on Sept. 9. “We are in the temple in vigil.”

She said others were reporting hearing trees, ceilings and walls falling. “The rain is terrible, the wind cannot be described,” she wrote. “We take care of each other, especially the children and the elderly.”

The bishop said Cubans would “have to bravely face what the hurricane has left.”

After battering those islands with 125 mph winds for hours on end, the storm strengthened again as it moved over the straits of Florida. The storm made landfall on Cudjoe Key as a Category 4 hurricane about 10 a.m. Sept. 10. That landfall was the first time on record that two Category 4 or stronger hurricanes made landfall in the U.S. in the same year. Hurricane Harvey hit Texas two weeks earlier.

Hugging Florida’s west coast, Irma went over land again midafternoon Sept. 10 at Marco Island. As the storm traveled up the Florida Peninsula, it flung its winds and rain across the entire state. Streets flooded in Miami and at least one construction crane toppled onto Biscayne Boulevard. Millions are without power. The head of the state’s largest utility estimated that half the state had no electricity.

It wasn’t wind, rain or storm surge that directly damaged the Diocese of Southwest Florida offices in Sarasota, but sewage. Officials had prepared for those other eventualities, said Director of Communications J. Garland Pollard, but not the sewage. He estimated the staff will have to relocate for a couple of weeks.

The Rev. Edward Gleason, rector of Trinity-by-the-Cove Episcopal Church in Naples, told his congregation on Sept. 11 via a video on Facebook that the church had only suffered minor rain damage. Gleason reported from  Mississippi, where he and family evacuated late last week. The parish’s facilities manager surveyed the campus earlier in the day.

“Of course, not all of us will have stories that are this bright and we will have neighbors who are worn and weary,” he said. “Let’s continue our prayers for the first responders and all those who are working to get our power lines fixed and the trees out of the way.”

He prayed that those who had suffered losses would find help in rebuilding and that “those who have been delivered will rejoice and lend a helping hand.”

For those just beginning the relief and recovery process, Gleason also urged a healthy dose of patience — with the power company and with finding gasoline and other needed supplies. “Perhaps most of all, patience with all of that traffic on I-75 that will surely build up on the way back home,” he added.

Episcopalians at Church of the Redeemer in Sarasota in the Diocese of Southwest Florida had sandbagged their buildings and shrouded many parts of the church in plastic. Sexton Rafael Gonzalez visited the grounds on Sept 11 and found little damage.

Pollard told ENS by phone from Sarasota on Sept. 11 that from what he and his diocesan colleagues have been able to learn thus far, Trinity’s and Redeemer’s stories are typical. “Everyone took this seriously and prepared very seriously, and that’s a good lesson,” he said.

However, there is not yet word from St. Mark’s Episcopal Church on Marco Island, where Irma made its second Florida landfall.

In the Diocese of Central Florida, many Episcopalians felt blessed in the hours since Irma passed over them, said the Rev. John Motis, deacon at Church of the Good Shepherd in Lake Wales. Motis is the diocesan Episcopal Relief & Development coordinator and participated in an 8 a.m. conference call with representatives from most of the dioceses in the southeastern United States.

“So far, by and large, everybody I’ve communicated with is sounding very positive and feeling fortunate,” Motis told Episcopal News Service by phone the morning of Sept. 11. “There is water damage, for sure, but no roofs torn off.”

Motis spoke with the Rev. Tom Seitz, rector of his church, who toured the church property on Sept. 11 and found some leaks and debris but not much else.

Of course, almost everyone in Polk County, Florida, has been without power since as early as 4 p.m. Sept. 10, about nine hours before the storm crossed over the county about 1 a.m. Sept. 11, Motis said.

“That’s surprising,” Motis said about the power cutting off so early. “It was so quiet when the eye passed over us, but before that, the blow seemed like it lasted forever — I mean, are you kidding?”