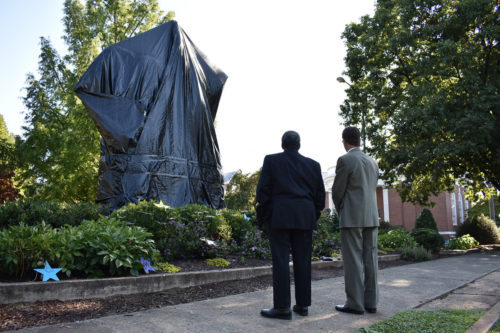 Presiding Bishop Michael Curry and the Rev. Paul Walker stand at the foot of the Robert E. Lee statue in Charlottesville, Virginia. The statue is wrapped in plastic while the city fights a legal challenge to the monument’s removal. Photo: David Paulsen/Episcopal News Service

[Episcopal News Service – Charlottesville, Virginia] Presiding Bishop Michael Curry on Sept. 7 visited each of Charlottesville’s three Episcopal churches, spoke at length with clergy and diocesan officials, and preached at an evening worship service here, less than a month after violence during a white supremacist rally thrust this Southern college town into the national spotlight.

Curry’s message was one of support, and of the power of Jesus’ love to show the way forward.

“We have been praying for you. We will continue to pray with you. Above all, we stand together,” Curry said in his sermon before the hundreds of people who filled St. Paul’s Memorial Church overlooking the University of Virginia campus.

On Aug. 12, Episcopal and other faith leaders joined with anti-racism counter-protesters in solidarity against the hate groups that had amassed in Charlottesville to oppose removal of a statue of Confederate General Robert E. Lee. The confrontation sparked clashes that injured dozens and left one counterprotester dead.

The melee also amplified a national debate over statues of Lee and other Confederate symbols, including at Episcopal institutions. In Charlottesville, subsequent City Council meetings have featured raucous debate on the issue, leading to a unanimous vote Sept. 5 to remove a second Confederate statue, the Daily Progress reported. 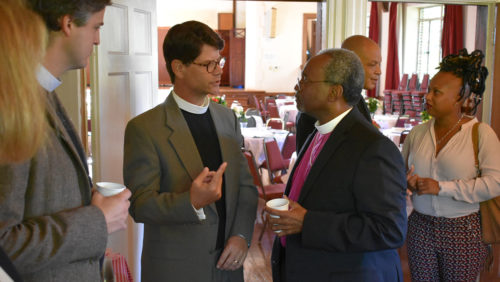 The Episcopal churches in Charlottesville are focused on healing and weren’t looking to generate headlines by inviting Curry, said the Rev. Paul Walker, rector of Christ Episcopal Church, a large congregation in downtown Charlottesville. He and other clergy members were grateful Curry agreed to this pastoral visit, a day filed mostly with private gatherings, as well as the public worship service.

Curry began the day at Christ Church, where bishops of the Diocese of Virginia met him around 9:30 a.m. for an informal orientation. He thanked them and the local Episcopal community for its work – “not just what you have done but who you were in the midst of all this.”

Christ Church is on the corner opposite Emancipation Park, where the statue of Lee now is wrapped in a layer of plastic as the city resolves a legal fight over its removal. The park is visible from Walker’s second-floor office window, and before the day’s proceedings got underway, he walked Curry across the street to spend a few minutes at the foot of the Lee statue discussing its history and pending fate.

From there, the group drove a short distance northwest to Trinity Episcopal Church. It’s a smaller and historically black, but diversifying, congregation that on Aug. 12 hosted an afternoon prayer service for faith-based groups to conclude their day of opposition to the white supremacist rally.

On Sept. 7, Trinity’s vicar, the Rev. Cass Bailey, welcomed Curry in the parish hall for conversations – Curry would later describe it as “sacred time” – with about 50 priests and deacons from the 18 congregations in the diocesan region around Charlottesville.

The meeting was not open to the public, but later in the day, Diocese of Virginia Bishop Shannon Johnston said it was a profoundly meaningful experience for those present. Curry served as chief pastor to them and provided a ministry of encouragement, Johnston said, and affirmed the support of the Episcopal Church.

“In times like Charlottesville has come through, the feeling of being connected to the larger body is extremely important,” said Johnston, who was in Charlottesville on Aug. 12 with other Episcopal clergy members. 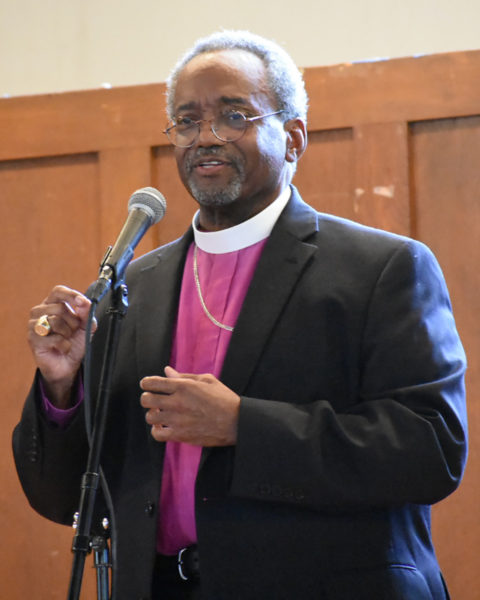 Johnston introduced Curry at his next stop, a luncheon back at Christ Church. More than 100 attended, primarily members of Diocese of Virginia governing boards and committees. Curry, in his remarks to them, again applauded those who stood up and spoke out against racism in Charlottesville last month.

“I was never prouder to be an Episcopalian, in all the pain, than I was when I saw you,” Curry said, while underscoring that the issue of racism is bigger than one city.

Racism is a demon that “still must be engaged,” he said. “We’ve come here to figure out how do we follow Jesus in a time such as this, and how do we do it with integrity and with a sense of wholesomeness and in ways that can help us all end the nightmare and realize God’s dream.”

Curry also spent time Sept. 7 with Episcopal college students from the Charlottesville area and those attending the University of Virginia. The afternoon meeting took place in the parish hall at St. Paul’s, a couple hours before Curry preached at the Eucharist in the church.

The Rev. Will Peyton, rector at St. Paul’s, alluded to Curry’s role as chief pastor in an interview with Episcopal News Service before the presiding bishop’s visit.

“I’m grateful to him, to take care of us, to express the care of the church,” Peyton said. “I think there really is a pretty universal feeling in Charlottesville that we were attacked.” 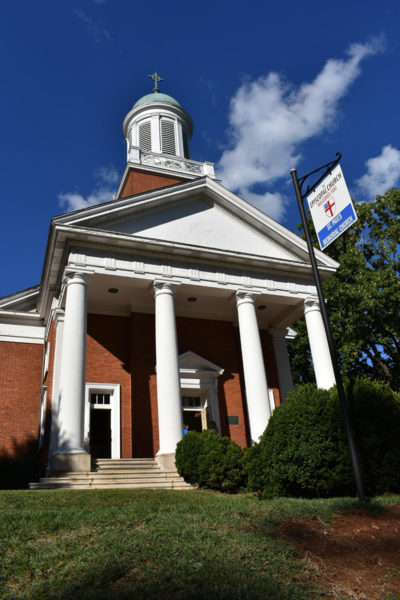 Peyton, whose church hosted a prayer service Aug. 11 on the eve of the white supremacist rally, kicked off the Sept. 7 worship service with a welcoming message that was followed by a long procession of choir and clergy.

Curry’s half-hour sermon directly addressed the prior month’s events in Charlottesville only briefly, yet his message of Christian love and compassion was an intentionally pointed contrast to the hate-filled views promoted by the neo-Nazis, Ku Klux Klan members and other supremacist groups that rallied behind the Lee statue.

He began by recounting the Gospel reading, the depiction in John 18:33-37 of Jesus’ response to Pilate. “Jesus was telling us then, and telling us now, that there is another way.”

Curry went on to pull in additional biblical references, from the Beatitudes and from Jesus’ last discourse in John 13-17 and his command to “love one another,” even your enemies. He continued that God’s unconditional love is embodied in Jesus’ selfless sacrifice on the cross.

“That kind of love is counterintuitive, it is counter to this world, but it can change this world,” Curry boomed to applause.

The presiding bishop also invoked the Rev. Martin Luther King Jr.’s rules for nonviolent direct action, which began with the command to meditate on the teachings of Jesus. He also shared a personal story, of a white man who once told him that the love shown by members of an Episcopal congregation had changed his life and prompted him to convert and turn away from his family’s past in the Ku Klux Klan.

The lesson, Curry said, is to be people of Jesus’ love without shame and to bear witness to that love. He concluded with a message specifically for the Charlottesville crowd.

“Charlottesville. Virginia. Lift up your heads, straighten your backs, walk together,” he said. “Walk together and work together and live the way of love until the love of God transforms this world.”