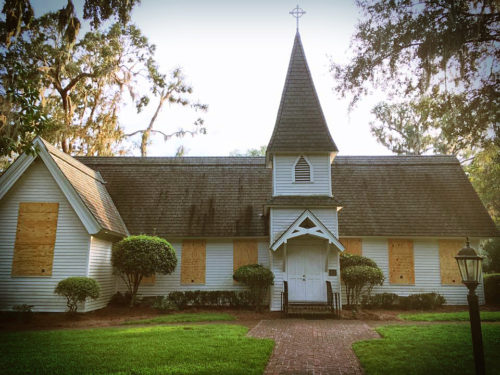 Christ Church in Frederica, Georgia, on St. Simons Island, stands boarded up and ready for Irma. Volunteers wrote scripture verses on some of the boards. Photo: Tom Purdy

[Episcopal News Service] The Rev. Jim Shevlin looked down at his list fewer than two days before Hurricane Irma was expected to drive up the spine of Florida’s peninsula. As a Category 5 storm, Irma had already killed at least 11 people and destroyed thousands of homes in the Caribbean islands.

And the massive storm was looming closer.

By Sept. 8, the rector had 18 to 20 people, five dogs and one cat on his list seeking shelter at his Church of Our Saviour on the north side of Lake Okeechobee in the Diocese of Central Florida. When Shevlin found out some parishioners had nowhere else to go, he decided to open the church, its halls and its offices for them. The church’s windows are covered with hurricane shutters. Evacuees will need to bring sleeping bags, food and water for at least three days, but there are two generators ready to kick in if the power goes out.

“All people got to do is show up, and we’ll welcome them with open arms,” Shevlin told Episcopal News Service. He’s worried about his home, but Shevlin’s wife, 20-year-old son, 17-year-old daughter, and their two dogs will shelter at the church with him and the other parishioners.

“Pray for us,” Shevlin said.

Farther south, more than half a million people in the Miami-Dade area were ordered to evacuate before Irma was expected to wreak havoc, on a track to churn northward through the state toward Georgia and South Carolina. Northbound traffic was almost deadlocked on the main thoroughfares on the state’s west and east sides, Interstates 75 and 95. Florida was running short of gasoline. Evacuation was becoming less of an option fewer than two days before Irma’s U.S. arrival.

Hurricane Irma was a Category 5 hurricane when it pulverized parts of the Leeward Islands on late Sept. 5 into Sept. 6. It decimated Barbuda and its 1,600 residents before turning to St. Martin and St. Barthelemy and going past Anguilla. The storm then struck Puerto Rico and the Virgin Islands, followed by the Dominican Republic and Haiti, all places with Episcopal Church congregations. Gathering information about damage there is being hampered by the storm.

At midafternoon Sept. 8, Irma was battering the Bahamas and Cuba. Now a Category 4 and still potentially catastrophic, Irma is predicted to make landfall somewhere in the Florida Keys about 2 a.m. on Sept. 10 and in South Florida that midafternoon. 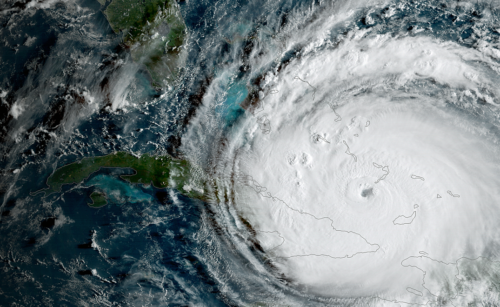 Hurricane Irma was battering Cuba and the Bahamas on Sept. 8 and heading for Florida, Georgia and the Carolinas. The island of Cuba is at the middle left, and the southern tip of Florida is above it. Photo: NASA GOES-16 satellite

Besides Shevlin’s church, within Central Florida there’s Holy Faith Episcopal Church in Port St. Lucie, which will serve as a relief center after the storm, said the Rev. Tim Nunez from the diocese. And lastly, Canterbury Retreat and Conference Center and Camp Wingmann have offered basic shelter.

“Most, if not all, of our churches have canceled all services and activities today through at least Monday,” Nunez told Episcopal News Service by email on Sept. 8.

The Rt. Rev. Gregory O. Brewer, bishop of Central Florida, gave practical hurricane resources for before, during and after the storm in a Sept. 5 letter before invoking the Christian’s duty to service. He suggested supporting the American Red Cross, volunteering parish halls as relief distribution centers, volunteering carpentry skills and gathering prayer groups.

“If the worst happens, this could be a time when our people could be of genuine assistance to our communities in need,” Brewer said.

Churches and church offices were closing across the state in anticipation of Irma. The Diocese of Southeast Florida’s office voicemail reported the Miami office will be closed until after the hurricane has passed. Miami’s Trinity Cathedral announced on Facebook it would be closed “until further notice.” And a voicemail recording from the Diocese of Florida, which covers northern Florida, said the diocesan office could remain closed until Sept. 12. 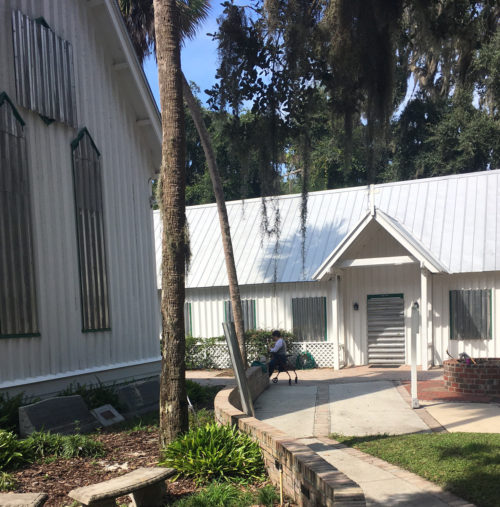 At St. George’s Episcopal Church on historic Fort George Island in Jacksonville, in the Diocese of Florida, the windows and doors were covered with sheet metal by Sept. 8 in preparation for Hurricane Irma. Photo: St. George Episcopal Church

Individual closings of the Diocese of Florida’s 62 churches and one cathedral are left up to the leadership of each church.

“If the circumstances warrant it, please cancel services and other church events and encourage your congregations to exercise caution. Insist that all remain mindful of the dangers that severe weather can present,” the Rt. Rev. Samuel Johnson Howard, bishop of the Diocese of Florida, said in a Sept. 7 letter.

Sandy Wilson, the diocesan communications director, was busy boarding the windows of her family’s Jacksonville Beach home on Sept. 8. For those who want to attend a service but also to stay safe, St. John’s Cathedral will offer an online Sunday service, she said.

Jane Palmer, a parishioner at St. Andrew’s Episcopal Church in the wooded Arlington neighborhood of Jacksonville, thought it was Sunday services as usual until she received an email on Sept. 8. All scheduled activities, including a special fall Rally Day and breakfast with mimosas, were canceled through Tuesday, said the email signed by the Rev. Mark Atkinson.

Meanwhile, Palmer prepared her log-cabin home and checked in with friends and family through Facebook and email. She tested her generator and purchased extra gas for it. She stocked her cabinets with food.

“Hotel rooms were all taken earlier this week, the interstate highways are filled with South Florida evacuees, and no telling which way would be safe to go,” Palmer said via email. “We could board the dogs and cats, but who takes chickens? So, the current plan is to hunker down.”

St. Paul’s by-the-Sea Episcopal Church in Jacksonville asked on Sept. 7 for help forming “a human chain to move the vestments and other valuables from the basement, up the stairs into the church.”

“We’re just kind of waiting,” Diocese of Southwest Florida Director of Communications J. Garland Pollard told ENS by phone from Sarasota. The diocese is keeping track of coastal churches and their clergy as they prepare for the storm. Towns from Captiva on Florida’s Gulf Coast south to Cape Sable on the southwestern tip of Florida have been warned of storms surges of 6 to 12 feet.

“Please be safe. And, if you are safe and sound, pray,” the Rev. Edward Gleason, rector of Trinity-by-the-Cove Episcopal Church in Naples, wrote in a Facebook post notifying the congregation that he left town to stay with family in Mississippi.

Episcopalians at Church of the Redeemer, less than a quarter of a mile from the bay in Sarasota, were sandbagging and enclosing parts of the church in plastic. 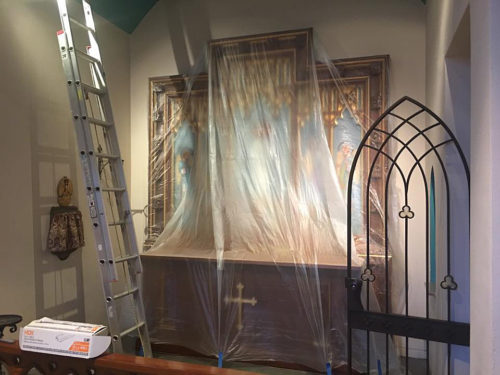 And at Calvary Episcopal Church at Indian Rocks Beach, volunteers spent part of Sept. 7 putting up more than 100 storm shutters, packing up vestments and altar frontals, getting books out of harm’s way and securing Eucharistic vessels.

“We did all we could, hoping and praying for the best, preparing for the worst,” the parish said on its Facebook page.

Episcopal Relief & Development helped Southwest Florida set up AlertMedia, an application to help to collect information about people and places in the diocese. AlertMedia can send text messages to congregational leaders relaying information and asking for a status report.

The dioceses of Louisiana and Texas both used the system during Hurricane Harvey. Southeast Florida, Central Gulf Coast, Georgia and South Carolina also have AlertMedia in place for Irma, according to Malaika Kamunanwire, Episcopal Relief & Development senior director for marketing and communications.

Episcopal institutions are helping Floridians prepare in somewhat unusual ways. For instance, St. Stephen’s Episcopal School will serve as a backup communications center for Manatee County, according to Pollard. The school is in a “nice, high, dry area of Bradenton,” he added.

Once the storm is done with Florida, Irma is now predicted to hit Georgia sometime on Sept. 11. Everyone east of Interstate 95 faces a mandatory evacuation order. “That is a lot of our Sunday attendance,” the Rev. Frank Logue, Diocese of Georgia canon to the ordinary, told ENS. Twenty congregations have cancelled Sept. 10 services.

Most of the clergy have already evacuated from the coastal areas, he said. “We’ve got churches that are more exposed boarded up and we’re waiting to see what the winds will bring.” 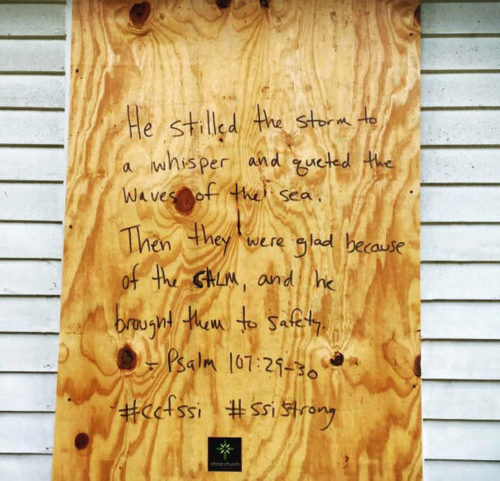 Some of the boards covering the windows of Christ Church in Frederica, Georgia, on St. Simons Island, have Bible verses on them. Photo: Tom Purdy

Meanwhile, just as in October 2016 when Hurricane Matthew hit the state, inland Georgia Episcopalians are helping by housing laypeople, clergy and, in a few instances, health care workers.

St. Anne’s Episcopal Church in Tifton, Georgia, is sheltering about 40 health-care workers who evacuated with their elderly patients from a nursing home in a low-lying coastal area, according to Logue. The patients are being housed in a Tifton care facility, and the nursing home employees are staying at the church.

“It worked very well all the way around and so they called and asked if they could repeat it,” Logue said. “Similarly, St. Paul’s in Jesup hosted hospice workers and they are opening their doors to them again.

Less than a week after Irma is predicted to hit Georgia, Presiding Bishop Michael Curry is due to be at the diocese’s Honey Creek Retreat Center for a revival. Honey Creek is on the Intercostal Waterway on the Georgia south coast. About 1,300 people are expected to attend.

“At this point, we’re still moving ahead with it,” Logue said. However, “even if we don’t get hit by the hurricane, a storm surge could cause some problems.”

A backup date is available, and Logue said he expects a decision will be made by Sept. 12. “It could be exactly what we need a week after,” he said.

And at the northern end of current Irma concern, the Episcopal Church in South Carolina was also in preparation mode. The diocesan staff has been participating in daily check-ins with Episcopal Relief & Development. The staff has also set up a daily check-in system for each congregation, according to Holly Hamor Votaw, director of communications.

Six churches so far have announced the cancellation of Sunday services for Sept. 10, including All Saints Episcopal Church, Hilton Head Island, which recovered from significant flood damage from Hurricane Matthew in October 2016. Many churches are waiting a bit longer to announce, as the predicted track changes, Hamor Votaw said.

Grace Church Cathedral in Charleston will offer all its Sunday services will be offered for whoever can be at church safely. Grace was one of the churches in downtown Charleston that stayed open through Hurricane Matthew.