A trailer for the video interview with Jefferts Schori, along with the text, is here. 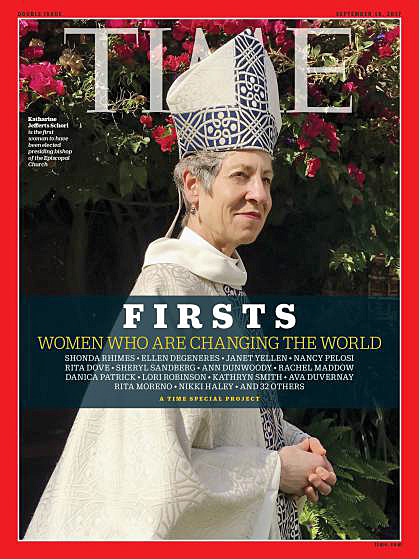 Jefferts Schori was the bishop of Nevada when she was elected in June 2006. She was installed as presiding bishop in November of that year. Her term ended in November 2015 when current Presiding Bishop Michael Curry succeeded her.

She is now serving as assisting bishop in the Diocese of San Diego while that diocese discerns who to call as its next bishop.

The Time project, which debuted Sept. 7, uses the metaphor of the glass ceiling. “What a jagged image we use for women who achieve greatly, defining accomplishment in terms of the barrier rather than the triumph. There she is up where the air is thin, where men still outnumber women, but where the altitude is awesome,” the introduction says. “Our goal with Firsts is for every woman and girl to find someone whose presence in the highest reaches of success says to her that it is safe to climb, come on up, the view is spectacular.”

The list of the other 45 women is here, and includes such women as Hillary Rodham Clinton, Serena Williams, Oprah Winfrey and Kellyanne Conway.

Time plans to publish a book from the series Sept. 17.