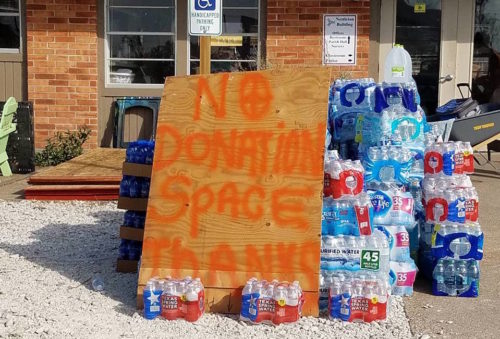 Several churches including Trinity by the Sea, businesses and other organizations in Port Aransas, Texas, can no longer take unsolicited donations because there is no clean, secure space for storage. A group left these donations when they were told they were creating chaos on the corner. Photo: Jennifer Wickham via Facebook

[Episcopal News Service] Brett Covington didn’t have any money to donate to people devastated by Hurricane Harvey. But she gave what she had: a steer.

Only in Texas, right?

Before accepting this gift, Christy Orman, the Diocese of Texas hurricane relief coordinator from Christ Church Cathedral in Houston, had to lock down a place that could use 400 pounds of meat. She immediately thought of The Abundant Harvest, a food truck that acts like a mobile food pantry. Once that end was secured, plus a butcher paid for, Orman decided to travel to Covington’s ranch in Hutto, Texas. 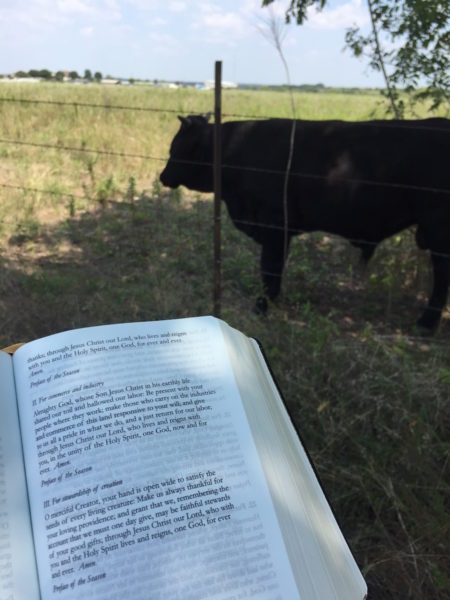 Christy Orman of Christ Church Cathedral in Houston said a prayer from the Book of Common Prayer to give thanks for the gift of the steer, which will provide 400 pounds of meat for hungry people affected by Hurricane Harvey. Photo: Courtesy of Christy Orman

“I told my husband, ‘I have to meet this cow.’ I want to honor this animal,” said Orman, who named the steer “Walstan” after the patron saint of farmers and ranchers. “We thanked Walstan for giving to so many that are in need right now … this was exactly where I needed to be, with this woman giving us a piece of her land, her living. The whole situation was just so surreal.”

Standing a few feet from his shiny charcoal coat, Orman read aloud the “For stewardship of creation” prayer from the Book of Common Prayer. The meat will likely become a casserole to nourish those in need since Hurricane Harvey made its first landfall August 25, near Rockport, Texas, on the barrier islands beyond Corpus Christi. The Category 4 hurricane is responsible for at least 60 deaths, record flooding and the destruction or damage of thousands of homes.

Walstan is the exception to the rule repeated by everyone leading ground-zero hurricane relief efforts. For those who want to help, please give money and gift cards — not supplies, unless specifically requested, said Carol Barnwell, communications coordinator for the Diocese of Texas who’s also organizing many of these efforts.

And most of all, don’t donate clothes, especially used clothes.

“I know it’s not as sexy to donate gift cards or funds, but it really is the best stewardship,” Barnwell said.

The diocese’s chaplains and mission groups bring the gift cards to families when they go to Episcopalians’ homes and to their neighbors’ homes. If the family needs dinner, they can buy dinner; if they need gas, they can buy gas. They can buy diapers that fit.

“One of the main things is the dignity of giving the person the ability to buy specifically what they need. It puts the money into the local economy, which is desperately needed,” Barnwell said. And yes, stores are stocked enough.

The most useful gift cards are the general ones, such as Visa and Mastercard, rather than for specific grocery stores or other chains that might not have a location in the neighborhood where they land. Cards for the Home Depot and Lowe’s are a pretty safe bet, too.

Parishes that want to harness the giving energy of their congregations can gather to create prayer cards to go with the gift cards. The Texas diocese is creating slip covers for gift cards with a prayer on one side and plans to put the template on its website so churches can print them out for their parishes. Also, parishioners can organize creative fundraiser events.

The best way for someone living outside the affected areas to help is by donating to the Hurricane Harvey Response Fund managed by Episcopal Relief & Development. Staff are coordinating with diocesan leaders to ensure that the gift cards they purchase with the donated funds are from stores located in or near the impacted community, said Katie Mears, Episcopal Relief & Development’s U.S. Disaster Program director, in an email to Episcopal News Service. 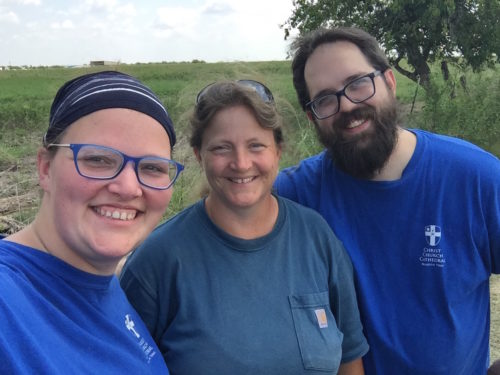 Christy Orman (left) of Christ Church Cathedral in Houston drove with her husband, Alex (right), to the farm of Brett Covington (center) in Hutto, Texas, to say a prayer over Covington’s steer, which she donated to feed people in need after Hurricane Harvey. Photo: Courtesy of Christy Orman

It’s also important to distinguish between donated goods from local groups and those from outside the affected communities.

“Donated goods coming from church groups and others within the impacted community can be helpful when they are based on the specific needs of local church partners and contacts. That said, transporting goods over large distances can make things more complicated and is rarely advisable,” Mears said.

Skilled labor and other volunteers won’t be needed from outside the area for a while, maybe even six months, she said. Episcopal Relief & Development’s church partners are still assessing needs and caring for those impacted. While volunteers aren’t needed yet, it’s certainly helpful to start planning for volunteers in the coming months and years, Mears said. Individuals and groups can sign up in the Ready to Serve database so church partners can reach out in the future as needs become clearer.

Mears is traveling to Texas this week to meet with leaders in the Episcopal dioceses of Texas and West Texas to survey and assess the coastal damage. She’s traveling with the Rev. Elaine Clements, the Louisiana diocesan disaster coordinator and member of Episcopal Relief & Development’s Partner in Response team. They will also be continuing to implement disaster recovery plans and map out the most urgent needs throughout the region. 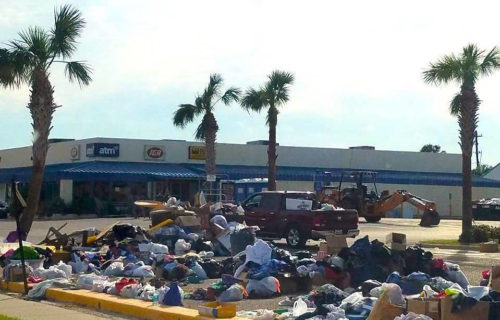 Trinity by the Sea Episcopal Church in Port Aransas, Texas, served as an early gathering point for the large amount of donated material that flooded the city after Harvey hit. By Sept. 1, however, the church had to stop accepting donations because there were no more secure, clean places to put the supplies, said Jennifer Wickham, a volunteer whose husband is rector of All Saints’ Episcopal Church in Corpus Christi, which is about 40 miles west of Port Aransas.

On Sept. 4, what had become known as Trinity GraceMart relocated its donations to the open-air pavilion at Roberts Point Park. Workers also moved donations from the city’s community center to that space, now known as Port Aransas Recovery Supply Depot.

Wickham, who has worked in disaster relief for many years, said sometimes donations aren’t useful or even useable. Food banks, for instance, often get opened, half-eaten food items such as peanut butter or pasta. It seems like some people are cleaning out their cabinets, Wickham said. Or the donations could be from someone who has the desire to give but not the financial ability to give any other way.

“Or, is it someone thinking ‘let’s give it to the poor people; they’ll take anything’? That is a completely disrespectful way to look at the people we’re helping,” Wickham said. A fellow volunteer in Port Aransas told her the deluge of donations felt like “somebody’s invited themselves to dinner at my house and they didn’t ask if I wanted it; they didn’t ask if it was helpful.”

It can offend donors to be told their gifts can cause more harm than good when, for instance, the trucks bearing supplies block the roads for residents returning home. When businesses, people and organizations receive unsolicited donations of supplies, it can create what Wickham called a “secondary disaster.” Rain destroys donations left outside, attracting rats and mosquitos.

One way to avoid the added effort caused by unsolicited donations is to work within a specific network that publicizes what materials are needed, when and where, and coordinates delivery.

For those who live not too far away, make sure to gather only what is on the organizer’s list of specific items needed, said the Rev. Nancy Springer, disaster relief coordinator from the Diocese of West Texas, in an online letter to the diocese’s clergy and laypeople.

“Please don’t think you know more than those on the ground or know of other products that would supplement your donation,” Springer wrote. “For example, the people in the hardest hit communities are asking for vinegar, but this doesn’t mean they need olive oil, too. Vinegar goes with hydrogen peroxide to help with mold clean-up.”

This is the reason the Rev. Bill Miller of Christ Church in Covington, Louisiana, was meticulous about his church’s collection for Hurricane Harvey.

“A big part of what we did was talking to the right people,” Miller said. “You have to appreciate the good intentions of people, but we also have the responsibility to educate ourselves and stay informed. It really speaks to the power of partnerships.”

Houston is Miller’s hometown where he has a lot of family and friends and was ordained to begin his ministry. “Within 24 hours of the flooding, or less than that, I had people in shelters texting me what they needed,” he said.

Besides those gift cards, the key word here is “requested” supplies. Miller learned what specifically to round up by doing his homework after people from a Covington construction company came to him and said they wanted to help. So, Miller talked to three people organizing relief efforts in the Diocese of Texas: the Rev. Jimmy Grace of St. Andrew’s Episcopal Church in the Heights of Houston, a contact at Lord of the Streets Episcopal Church and an American Red Cross representative.

“So basically, we had three lists. The construction company waited for me to give them the list, and then they got the supplies in bulk, got the transportation — two trucks and drivers — donated,” Miller said. 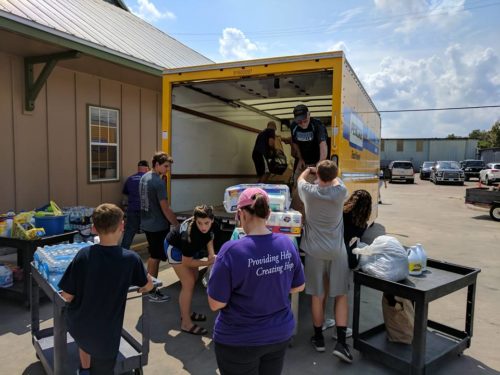 On Sept. 7, trucks filled with $50,000 in requested supplies and $10,000 in gift cards headed to a donated warehouse space with a forklift and pallet jack, overseen by Grace, rector of St. Andrew’s Episcopal Church in the Heights of Houston, and the Rev. Carissa Baldwin-McGinnis, associate rector. That Houston church has a network with congregations in lower-income areas of Houston, San Pablo, and San Pedro, as well as with The Metropolitan Organization of Houston, a group of institutions dedicated to developing power and leadership among citizens in order to transform the city. St. Andrew’s is also in communication with the Ven. Russ Oechsel, Jr., the Texas diocesan archdeacon in charge of relief who’s working with Episcopal Relief & Development. 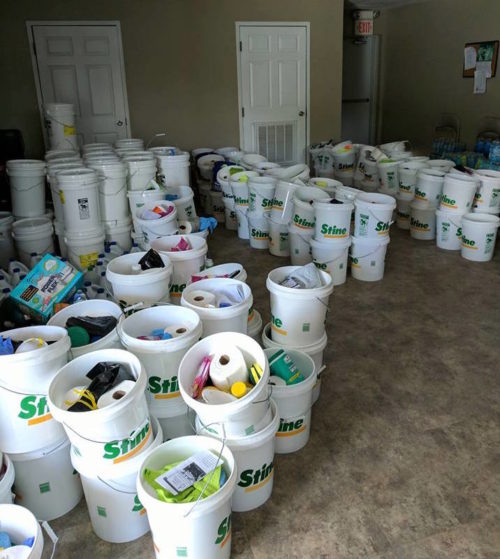 Verifying the best thing to do sometimes takes a lot of phone calls. When students, their families and other parishioners clamored for a way to help, the Rev. Robert Beazley, associate rector of St. Andrew’s Episcopal Church & School in New Orleans, contacted the Rev. Lois Maberry, who is in charge of disaster response in the Diocese of Western Louisiana. She connected him with Rev. Jack Myers, rector of Church of the Good Shepherd in Lake Charles, Louisiana, who then connected him to a nearby Catholic Charities facility that could handle the delivery and sorting of supplies.

Beazley drove a 16-foot truck of supplies to the designated spot and after unloading, found he could be of more service: Volunteers asked to use his empty truck to move 300 cleaning kits for families from a nearby church to the places that needed them. Otherwise, they would’ve had to pack dozens of volunteers’ vehicles.

“I kept hearing phrases like, ‘You’re a godsend!’ But if it hadn’t been for the students and parishioners stepping up and donating the original supplies, that truck would have never been there in the first place,” Beazley said on Facebook.

He continued in a phone interview with Episcopal News Service: “I’ve been at this church less than two months, and they’ve already blown me away with their willingness to help the stranger.”

What helps and what hinders