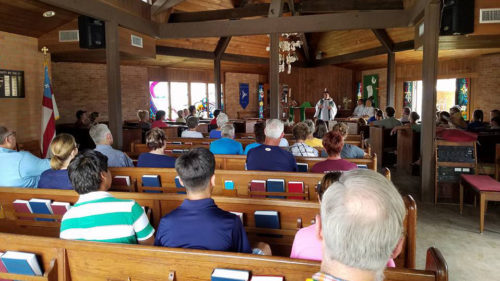 The Rev. James Derkits, rector of Trinity by the Sea Episcopal Church in Port Aransas, Texas, said Sept. 3 that people there were “living out the teaching of Romans.” Photo: Jennifer Wickham via Facebook

[Episcopal News Service] Sometimes, it is the simplest words that work the best. That, and some humor.

That is how the Rev. Dr. Russell J. Levenson, Jr., rector of St. Martin’s Episcopal Church in Houston, began his Sept. 3 sermon. Like many preachers faced with the task of bringing the word of God to bear on the experience of Hurricane Harvey, Levenson combined simple comfort laced with humor and biblical interpretation with a call to ministry.

When he asked his congregation how they were doing and there was what seemed to be a positive murmuring reply, Levenson said gently, “Yeah, you’re all lying.”

He elicited a good laugh.

At Trinity by the Sea Episcopal Church in Port Aransas, Texas, near where Harvey first struck on Aug. 25, the Rev. James Derkits described in his sermon a typical conversation.

“We’re just going to keep on doing that,” Derkits said.

He admitted that he didn’t know if he could preach that day. “I wasn’t sure I could say one word without crying,” said Derkits, whose family lost much when Harvey destroyed the rectory. He has been helping to lead recovery efforts in his town.

At St. Dunstan’s Episcopal Church in Houston, the rector, the Rev. Rob Price, confessed that he had been busy that week with “the work of doing the word of God and I haven’t had as much time as I’d like to prepare for preaching upon the word of God.”

Luckily, he said, the lectionary came to the rescue. The appointed readings included the story of Moses standing on holy ground before the burning bush to receive God’s call to lead his people out of misery, Paul’s exhortation to the Romans not to lag in zeal and be ardent in spirit as they serve the Lord, and Jesus’ call to his disciples to take up their cross and follow him.

Price said he had seen St. Dunstan parishioners engaged in “simple acts of love that will persist long after the media has left Houston.” And, he pledged that “we will be walking with our [church] family and your friends for as long as it takes.”

At St. Martin’s, Levenson told his congregation that God was everywhere while Harvey was submerging Houston under nearly 52 inches of rain, whether they themselves suffered damage or had to be rescued – or not. He urged his listeners to act.

“In the wake of nature’s havoc, now comes the work of God. You, as you stand before him in prayer, are like Moses,” he said, telling them they have the opportunity to show the world that they are the body of Christ. “You, as you allow genuine love to pour out of you. You, as you show others you’re his disciples by loving” the people in their communities.

The waters of baptism are stronger that Harvey’s flood, he said, urging the congregation to transplant the holy ground of their worship space into the community. “My friends, it’s what we’re called to do,” he said. 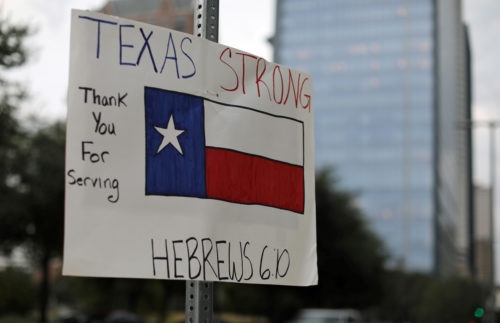 A thank-you sign hangs outside a downtown hotel in Houston that is housing emergency response teams in the aftermath of Harvey. Hebrews 6:10 says, “For God is not unjust; he will not overlook your work and the love that you showed for his sake in serving the saints, as you still do.” Photo: REUTERS/Mike Blake

At St. Peter’s Episcopal Church in Rockport, Texas, also near where Harvey first came on land, the Rev. Jim Friedel pointed to symbolic new growth. “When I returned from evacuating a few days ago, every single tree was bare,” he said. “But today, if you look closely at the oak trees on our church grounds, new leaves are budding.”

Friedel held Eucharist in the church’s parking lot in muggy weather under a blazing sun. During the readings, a neighboring congregation could be heard singing “Bless the Lord, my soul.”

“We have an opportunity to respond in a way that will give new life,” the rector said as helicopters droned overhead.

Reminding worshippers that God heard the cries of the Israelites, Friedel said “he has heard our cries and the cries of this community. We have suffered, and now with grateful hearts, we will press forward.”

The Very Rev. Barkley Thompson, dean of Christ Church Cathedral in downtown Houston, also used the image of communities being stripped bare but beginning to show new life. In a Sept. 3 blog post, he described what Houston looked like “after the world ended.”

“In the wake of disaster, beyond the wilderness, when everything is stripped bare, the God whom fire cannot consume and water cannot drown comes to us and says, ‘I will send you,’ ” he wrote. “God is calling now – us, this cathedral, this community of disciples – and he does not send us alone. We are Christ Church together, and we will see the dawn.”

Eucharist at Trinity by the Sea in neighboring Port Aransas took place with the sounds of recovery in the background. Derkits thanked the police chief, mayor and city manager for being at the service, and for their leadership.

He said that Paul could have found on the battered streets of Port Aransas the basis for the inventory of Christian behavior that he gave to the Romans.

Earlier in the service, Derkits gathered children around the baptismal font and showed them shells he had found along the hurricane-littered beach. He called them treasures that Harvey had washed up, adding that they were symbols of what was happening in their city.

“We’ve had this challenging terrible hurricane that’s come through and all these treasures have been stirred up in people’s hearts,” he said, explaining how residents and volunteers alike were taking care of the city and of each other.

He asked each child to take a shell to serve “as a reminder to watch out for the treasures because even though we’ve had a hard time and it’s going to be a rough road ahead, there’s lots of good treasures out there to be had.”

Diocese of Texas Bishop Andy Doyle told the congregation at St. Cuthbert Episcopal Church in Houston that seeing Episcopalians helping their communities was among the most joyous parts of his job.

“Nothing shows me the kingdom and God’s love for us more than the work you all have undertaken in the last week and the work that is before you,” he said in his sermon. “And it would be easy to say we don’t have the resources or we don’t know what we’re doing. We’re not professionals. We don’t know about remediation. But that does not stop the kingdom of God.

To the east, the Rev. Sharon A. Alexander, rector of Trinity Episcopal Church in Baton Rouge, Louisiana, recalled for her congregation Hurricane Katrina in 2005, last year’s so-called 1,000-year flood in Baton Rouge and her city’s deep economic connections to Texas through the energy and chemical industries.

“They extended their help to us last year after our flood. It is our turn to return the favor. It is not in our DNA at Trinity to ignore the suffering of others,” she said of Texans. “You all have demonstrated many times qualities set forth in today’s passage from Romans: hope, zeal, prayer, hospitality – these are keys to the kingdom that we have inherited from St. Peter.”

Alexander said Trinity will use those keys to help people in the Beaumont, Texas area. She asked parishioners to ask in their prayers “how we can be bearers of Jesus’ compassion and hope, as we were once the receivers of these holy gifts.”

Preachers as far away as California spoke of Harvey. The Rev. Peggy Bryan, pastoral assistant at St. Andrew’s Episcopal Church, in Saratoga, California, described how her two sons and their families, spared from the flooding in Houston, had taken in evacuees – human, dog and guinea pig. In part, she said, their actions reciprocated the help they received in the wake of Hurricane Rita in September 2005.

Bryan noted that both CNN and Breitbart News had acknowledged this sort of volunteerism on the part of ordinary people. “Seriously, if those two news sources can spin the same direction, even for a fleeting moment, there is hope,” she said. “And it’s not hope for more unifying disasters but hope we can pursue bold love and courageous hospitality, so one divine day it’s not radical, but natural.”