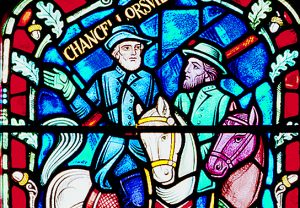 [Episcopal News Service] Washington National Cathedral and the Diocese of Washington announced Sept. 6 that the cathedral’s stained-glass windows depicting two Confederate generals will be removed, bringing to an abrupt close a discernment process that was expected to last into next year.

“These windows are not only inconsistent with our current mission to serve as a house of prayer for all people, but also a barrier to our important work on racial justice and racial reconciliation,” cathedral and diocesan leaders said in a written statement. “Their association with racial oppression, human subjugation and white supremacy does not belong in the sacred fabric of this Cathedral.”

The expedited decision comes less than a month after the violent clashes between hate groups and anti-racism counter-protesters in Charlottesville, Virginia, that amplified the national debate over Confederate symbols in public places, including in Episcopal institutions.

Presiding Bishop Michael Curry will visit Charlottesville on Sept. 7 to meet with clergy, diocesan staff and Episcopal students from the University of Virginia. He also will preach at an evening worship service near where Episcopal leaders and others joined in solidarity Aug. 12 against white supremacists who were rallying around a statue of Confederate General Robert E. Lee.

The melee, which left one counter-protester dead, prompted renewed scrutiny of Confederate symbols in Episcopal institutions, from Christ Church Cathedral in Cincinnati, Ohio, to a church named after Lee in Lexington, Virginia.

Washington National Cathedral had been halfway through a two-year period of discernment over its windows honoring Lee and Stonewall Jackson. That process began in the wake of the June 2015 massacre of nine members of the Emanuel African Methodist Episcopal Church in Charleston, South Carolina. Gunman Dylann Roof’s fondness for the Confederate flag sparked a broad re-examination of the flag as a controversial symbol of the South that had been co-opted by white supremacists.

The cathedral removed depictions of the Confederate flag almost immediately. Dean Randy Hollerith wrote a June 30 letter to the congregation urging patience with the longer process of discerning the fate of the windows themselves.

“There is real frustration that we have not yet decided the ultimate disposition of the windows,” Hollerith said. “I want you to know I hear that frustration, and I appreciate that many people have good reasons for feeling that this decision-making process is taking too long.”

But he said the congregation had embarked on the work of reconciliation “for the long haul” and would continue the conversations “over the next year.”

“These windows, and these questions, have exposed emotions that are raw and sometimes wounds that have not yet healed,” Hollerith wrote. “They have helped to reveal how much we still have to learn as we work toward repairing the breach of racial injustice and building the beloved community.”

A cathedral spokesman told Episcopal News Service last month that the events in Charlottesville added a sense of urgency to the process, but the cathedral gave no updated timetable for a decision on the windows.

Instead of dragging on for months, the process came to an end with the statement Sept. 6 signed by Hollerith, Bishop Mariann Budde and Cathedral Chapter Chair John Donoghue. They said the windows, installed in 1953 when the civil rights movement was gaining steam, “will be deconsecrated, removed, conserved and stored until we can determine a more appropriate future for them.”

The statement also alluded to the violence in Charlottesville.

“The continued presence of white supremacy, anti-Semitism and other forms of hate in our nation cannot be ignored – nor will they be solved simply by removing these windows or other monuments,” the statement said. “The racial wounds that we have seen across our nation compel us to renew our commitment to building God’s Beloved Community.”

The full text of the statement follows.

Two years ago, following a tragic shooting at a church in Charleston, S.C., then-Dean Gary Hall called for the removal of two stained glass windows at the Cathedral that honor Confederate Generals Robert E. Lee and Thomas “Stonewall” Jackson.

At that time, we began a process to engage this community in deep questions of racial justice, the legacy of slavery and God’s call to us in the 21st century. Over the past two years, we have heard from deeply passionate voices who have engaged with us and held us accountable to this process, and we thank them.

The programs we have hosted, the conversations within our community and national events have brought greater focus on the key question facing us: Are these windows, installed in 1953, an appropriate part of the sacred fabric of a spiritual home for the nation?

After considerable prayer and deliberation, the Cathedral Chapter voted Tuesday to immediately remove the windows. The Chapter believes that these windows are not only inconsistent with our current mission to serve as a house of prayer for all people, but also a barrier to our important work on racial justice and racial reconciliation. Their association with racial oppression, human subjugation and white supremacy does not belong in the sacred fabric of this Cathedral.

These windows will be deconsecrated, removed, conserved and stored until we can determine a more appropriate future for them. The window openings and stone work in the Lee-Jackson Bay will be covered over until we determine what will go in their place.

There are several things that we know to be true:

• Whatever their origins, we recognize that these windows are more than benign historical markers. For many of God’s children, they are an obstacle to worship in a sacred space; for some, these and other Confederate memorials serve as lampposts along a path that leads back to racial subjugation and oppression.

• A central question we have asked throughout this process is what narratives are shared within the sacred fabric of the Cathedral, and which are yet untold. We have concluded that these windows tell an incomplete and misleading account of our history. We are committed to finding ways to offer a richer, more balanced expression of our nation’s history.

• We want to be clear that we are not attempting to remove history, but rather are removing two windows from the sacred fabric of the Cathedral that do not reflect our values. We believe these windows can yet have a second life as an effective teaching tool in a place and context yet to be determined.

• The recent violence in Charlottesville brought urgency to our discernment process.  We find ourselves compelled by the witness of others, moved by the presence of God in our midst and convicted that the Holy Spirit is pointing us toward the answer. The continued presence of white supremacy, anti-Semitism and other forms of hate in our nation cannot be ignored – nor will they be solved simply by removing these windows or other monuments. The racial wounds that we have seen across our nation compel us to renew our commitment to building God’s Beloved Community.

There are questions we cannot yet answer, such as what will replace these windows. Those answers will come after careful thought and deliberation. But we know this for sure: while this part of our work has reached its end, the harder task of working for racial justice, combating intolerance and fostering reconciliation continues with renewed urgency.

We recognize that there are people of goodwill who disagree with our decision, and also others who have been hurt or confused by the amount of time it took us to reach it. We trust, however, that what unites us in Christ is greater than our differences. We continue to hold the entire Cathedral community in prayer as we strive always to see each other as beloved children of God.

In the coming weeks and months, the Cathedral leadership will create opportunities for all in the Cathedral community to express their views and feelings. We promise to listen carefully to all who are willing to share. And we renew our commitment to follow Jesus and do our part to build the Kingdom of God, on earth as it is in heaven.