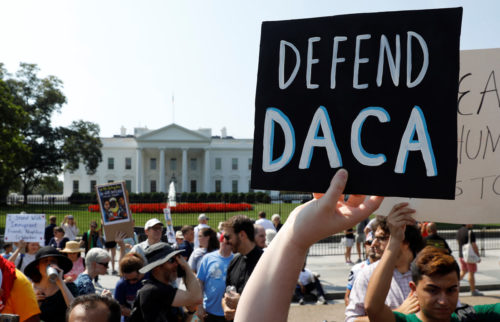 Demonstrators protest in front of the White House after the Trump administration Sept. 5 scrapped the Deferred Action for Childhood Arrivals (DACA), a program that protects from deportation almost 800,000 young men and women who were brought into the U.S. illegally as children. In Washington, D.C., Diocese of Washington Bishop Mariann Budde joined other faith leaders at the demonstration. Photo: REUTERS/Kevin Lamarque

[Episcopal News Service] Many Episcopalians vowed to fight to preserve the federal immigration policy known as DACA, or Deferred Action for Childhood Arrivals, and to support the 800,000 “Dreamers” it impacts, after the Trump administration announced Sept. 5 an end to the program.

The administration announced that it would phase out the DACA policy, giving Congress six months to act legislatively to save the program that allowed qualifying undocumented immigrants who came to the United States as children to remain in the country.

For the Rev. Nancy Frausto, associate rector at St. Luke’s Episcopal Church in Long Beach, California, in the Diocese of Los Angeles, and a Dreamer, the Sept. 5 news was terrifying.

Frausto, 33, who came to the United States at age 7, said she and her brother “are very proud of our Mexican heritage, but we know no other country. We have worked so hard to achieve our dreams, and it all could be taken away in a second.

“I am trying very hard to stay positive, to remember the words from last Sunday’s reading, ‘do not be overcome by evil but overcome evil by good.’ But, let me tell you, it’s not easy.”

Frausto was ordained a priest in 2013; she grew up attending All Saints’ Episcopal Church in the Highland Park neighborhood of Los Angeles where she was a popular youth leader. Because of her undocumented status, she was unable to apply for financial aid for college, so the church created a scholarship fund and assisted her education.

In 2013, she was named an Episcopal Church Foundation Fellow, and she is popular at conferences for speaking about “scrappy” or struggling churches. She also serves as a consultant evangelist for the Presiding Bishop’s Office on Evangelism.

“I know a lot of the church will rise up and will defend the rights of all people, and there’s people doing amazing work,” Frausto told ENS, amid frequent pauses and tears. “But, it’s so hard to stay positive right now.”

Frausto said she knows immigration can be “a touchy subject.”

“And I know that in our church there are people who stand on both sides. And with all due respect to anyone who agrees with the side that all undocumented persons should be sent back to their country, I would hope that their Christian value would be stronger than their political values.”

The Episcopal Church’s presiding officers issued a statement after the Trump administration’s announcement, vowing to work for immigration reform and to support Dreamers like Frausto.

“We believe that these young people are children of God and deserve a chance to live full lives, free from fear of deportation to countries that they may have never known and whose languages they may not speak,” Presiding Bishop Michael Curry and President of the House of Deputies Gay Clark Jennings said. “As people of faith, our obligation is first to the most vulnerable, especially to children. In this moment, we are called by God to protect Dreamers from being punished for something they had no agency in doing.”

The complete statement is here.

The Episcopal Church’s Office of Government Relations, as well as its Episcopal Public Policy Network, has long been engaged in advocacy for “a humane and proportional immigration system,” based on the General Convention’s stance on the issues involved. The office has a collection of resources for advocacy and action on immigration policy, as well as information on current policies and proposed legislation.

In Los Angeles, members of Episcopal Sacred Resistance, the diocesan task force on immigration, said they would join a demonstration at 5 p.m. in the city where thousands were expected to protest the decision.

Just last week, they had rejoiced at the Aug. 30 release from detention of Romulo Avelica-Gonzalez. Immigration and Customs Enforcement (ICE) agents took him into custody in the presence of his teen daughter, after he had dropped another daughter off at school. The case was widely publicized, and after a six-month detention, he was returned to his family.

Avelica-Gonzalez, 49, has lived in California for 30 years and has four U.S.-born children. The nation’s highest immigration court vacated a final deportation order on Aug. 10, and his case will return to a local court for another hearing.

“In the Episcopal Diocese of Los Angeles, home to one of the largest Immigrant populations in the nation, we bishops reaffirm the diocese’s continuing commitment to Dreamers and their families and call upon the president and Congress to heed the call of a clear majority of the American people and guarantee the status of these deserving persons once and for all. Just as the body of Christ is strengthened by unity amid difference and diversity, these Dreamers, these amazing Americans, make our country stronger each day,” Bishop J. Jon Bruno, Bishop Suffragan Diane Bruce and Bishop Coadjutor John Taylor said in a statement.

“Renewing our welcome to the Dreamers is just the first step. The federal government is long overdue in adopting comprehensive immigration reform that recognizes the vital role that immigrant workers play in the U.S. economy. Especially in the wake of Charlottesville, the government invites the charge of racism by continuing to exploit the industry of these workers and their families, especially those from Mexico and Central and South America, without providing the protections and rights they deserve. The United States, one nation under God, pledged to provide liberty and justice for all its people, can and at long last must do better.”

Immigration activists will continue to press for justice, said the Rev. Mike Kinman, rector of All Saints Church, in Pasadena, California.

“This is us,” Kinman told ENS in a telephone interview Sept. 5. “This is not some other. These are our sisters and brothers and members of our family, members of our community. These are God’s beloved and our beloved. God has joined us together, and Scripture tells us that which God has joined together, let no one put asunder.”
Kinman said the administration’s decision means the government is “literally trying to tear our family apart, and we can’t do that because family is a gift from God.”

“We know how to fight this and we’re going to fight it. It starts by doing what we’re doing today, taking to the street and saying, not on our watch, especially here in California, where about 223,000 of the 800,000 people who are Dreamers live,” he said of the demonstration planned for La Placita Olvera in Los Angeles later in the day.

He called the statement released by Attorney General Jeff Sessions “a tragic rejection of the actual gospel of Jesus Christ.”

“From a nation that has for centuries stolen resources from Central American nations, pauperizing them and leaving their citizens little choice but to follow those resources north in search of survival, this action is particularly cruel and deeply ironic,” Kinman added.

“It seems [Trump] has so little political capital left, why would he spend any of it on something that seems to me to have no upside?” Leslie said.

Leslie, who recently retired as archdeacon of the diocese, said she also planned to be at the demonstration in downtown Los Angeles and she vowed to continue to fight for just immigration reform.

“There’s a lot that creative legal minds can do,” Leslie said, adding, “we haven’t finished pushing the envelope yet.”

Leslie said the release of Avelica-Gonzalez after six months of dogged work proved a point. “It just means you can, when motivated people work together, you can get something done,” she said. “I’m looking forward to being with a bunch of motivated people today.”

Avelica-Gonzalez’s release doesn’t make up for the other people, she said, who are being unfairly held in Adelanto detention center in Los Angeles. However, each time activists are faced with a new challenge “and we gather together, it gives me hope,” Leslie added.

Meanwhile, Diocese of Washington Bishop Mariann Budde was among the immigration advocates, Dreamers and other faith leaders who demonstrated in front of the White House on Sept. 5. Speaking to the crowd, she noted that last week she joined with Cardinal Donald Wuerl of the Roman Catholic Archdiocese of Washington; Rabbi M. Bruce Lustig, senior rabbi of Washington Hebrew Congregation, and Imam Talib M. Shareef of Masjid Muhammad, The Nation’s Mosque, to send a letter to Trump and members of Congress, saying that each religion’s sacred texts and teachings are clear that supporting Dreamers “is consistent with the moral imperative of extending hospitality to the stranger, of caring for immigrants and children, and of loving our neighbors as ourselves.”

“Now that the president has acted, we will turn our attention to Congress,” Budde said outside the White House.

Dreamers are part of the U.S., she said. “I want you to know that you belong here. We love you; we are so proud of you; and we need your gifts, talents and hard work to help make this country live up to its greatest ideals.

“Your dream is the American dream of opportunity and diversity, of safe haven and of building a better life for ourselves and our families. The future of this country is in your hands. The president’s decision is not the final answer on DACA. We commit ourselves to work with and alongside you for a better day.”

As for Frausto, she admits to struggling against “being in a very dark place now.” She was able to work in the church because of DACA, after previously fearing she would need to leave the country for at least 10 years.

As to what she’d say to the Trump administration: “Have a little heart. Stop trying to dehumanize us, we are God’s children.”