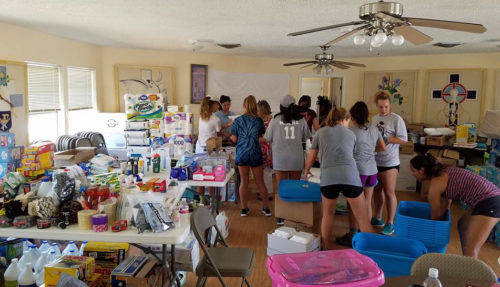 Volunteers at Trinity by-the-Sea Episcopal Church in Port Aransas, Texas, sort donations on Aug. 31. The church is serving as a staging ground for recovery workers in the town that is near where Hurricane Harvey made landfall. Photo: Jennifer Wickham via Facebook

[Episcopal News Service] The rest of the United States might be headed into the three-day Labor Day weekend with thoughts of picnics and beaches, but Episcopalians along the Harvey-hit Gulf Coast will be working to clean up the damage and begin to put their lives, and the lives of their neighbors, back together.

After moving east and submerging the Houston area under nearly 52 inches of rain, a weakened Harvey wobbled back out over the gulf and then returned to land on Aug. 30, hitting again near Cameron, Louisiana.

The New York Times reported Sept. 1 that at least 46 deaths were related to, or suspected to be related to, the storm. That number could still rise.

The remnants of Harvey, now classified by the National Hurricane Center as Post-Tropical Cyclone Harvey, are moving northeastward across the Ohio Valley and pushing as much as 1 to 6 inches of rain into Kentucky, Indiana, Ohio and West Virginia.

“All of the churches in the Diocese of West Texas are standing strong,” said the diocese on whose southern portion Harvey made its first two U.S. landfalls on Aug. 25. “There is damage, which is to be expected after a direct hit from such a large storm. Much of the damage includes fallen and broken trees and limbs, as well as large amounts of debris that were distributed with the 100+ mph winds and the storm surges.”

The churches across the diocese are “doing what they are supposed to be doing,” the statement said. “They are responding and issuing calls to action by making numerous hygiene kits and beginning to gather and organize volunteer efforts.”

In Port Aransas, Texas, Trinity by the Sea Episcopal Church, with its parish hall and church in relatively good shape, has become a gathering point for volunteers before they go out in neighborhoods. Once there, they are helping survivors clean up massive amounts of debris from their properties and ruined items from their homes and businesses.

One volunteer, Eddie Roberson, said other folks “are out in droves providing free food and everything imaginable to help all of us working.”

“A beautiful ray of hope in a place that desperately needs it,” he wrote in a Facebook post. “God Bless us all!”

Roberson said it is hard to navigate through Port Aransas because most of the street signs are missing. “Be prepared, the devastation is unreal. The working conditions beyond the heat zaps your energy fast,” he wrote. “The mildew, humidity and heat from the sun make for a very humbling experience even for the most in-shape individual.”

Jennifer Wickham, who lives in Corpus Christi where her husband is rector of All Saints’ Episcopal Church, is helping coordinate volunteers at Trinity. “We were overwhelmed at several times today, not only by the generosity of volunteers who came to help, but also by the sheer volume of people bringing truckloads of supplies,” she said in an update late on Aug. 31.

The outpouring is wonderful, she wrote, but “it is becoming clear that the storage of donations will quickly become a challenge — not only for us, but also from many of the grassroots organizations working in the community.” The few places in town that are clean and secure are filling with large deliveries of supplies, and some groups have even begun to turn donations away.

“But this is not because we have enough items,” wrote Wickham, who is also the development coordinator for Saint Vincent Centre for Handicapped Children in Port-au-Prince, Haiti. “It is simply a reality that there are not enough places to put all of the things we need.”

Thus, Wickham suggested that people donate in just one of two ways: labor and money.

“I am exhausted, but amazed by the people, resources, and love that keep pouring in,” the Rev. James Derkits, Trinity by the Sea’s rector, said in West Texas’ update.

Derkits, his wife, Laura, and their family had to relocate when they discovered after Harvey that the storm destroyed the nearby rectory. They hope to move back to Port Aransas into a friend’s condominium once power is restored, he told Episcopal News Service.

Meanwhile, Trinity will have two services on Sept. 3. 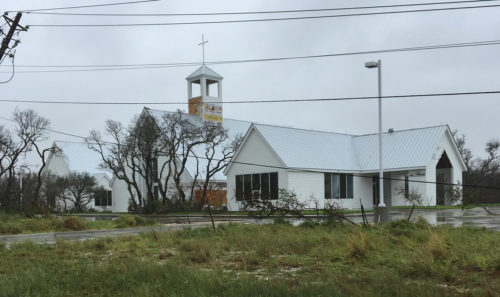 In nearby Rockport, Texas, St. Peter’s Episcopal Church sustained minor damage. The congregation used its Facebook page to check on its members.

St. Peter’s state is unusual. Rockport Mayor Charles Wax estimated that 30 to 40 percent of the town’s houses and businesses were destroyed, and another 30 percent are so damaged that they will need to be demolished.

A parishioner of St. James Episcopal Church and School in Alexandria, Louisiana, Babs Leggett is worried about Trinity Episcopal Church in Galveston, Texas, where she and her husband, Jim Leggett III, attend when vacationing and visiting family. Leggett is on the church’s email list, and she received an email warning people that there would be no Sunday service on Sept. 3.

“It’s like a second home to us,” Leggett told Episcopal News Service. Her cousins were away from their Houston home when Harvey hit, and their house sitter had to evacuate to a hotel with their cat. They still don’t know how their home fared, Leggett said. The Leggetts plan to send a check to help the parish recover. “We’re just grieving for what’s happening next door. We went through it with Katrina, and it’s unbelievably challenging.”

As the barrier island towns near Corpus Christi pick of the pieces, Episcopalians in Houston are helping their neighbors in that waterlogged city.

Harvey survivors are finding food, cleaning supplies, underwear and more at Epiphany Community Health Outreach Services, a ministry of the Episcopal Church of the Epiphany. ECHOS helped 104 families on Aug. 31.

“Virtually all of them needed cleaning supplies, food, diapers, baby formula and other staples for their homes,” the agency said in an emailed update. “Each of them had a story to tell. … Most who walked in our doors today lost everything. Some had damaged apartments. All have been traumatized. For many, it will take months for life to go back to normal. For others, it will be a new normal.”

ECHOS will host what it is calling a Disaster Relief Food Fair on Sept. 2. Ten pallets of water and disaster relief food kits will be available. Bee Busy Wellness Center will have a nurse practitioner onsite to provide health assessments.

And, because relief work needs fuel, a local Starbucks delivered donated coffee on Aug. 31 for ECHOS workers and clients.

“These days of disaster have also been marked by many occasions of grace,” the Very Rev. Barkley Thompson, dean of Christ Church Cathedral in downtown Houston, wrote in a Sept. 1 Facebook post.

The most recent example of that grace, he said, was the Rev. Steve Wells, the pastor of South Main Baptist Church, and his congregation delivering shoes to the Beacon. The Beacon is a cathedral ministry that offers homeless people daily services, civil legal aid, counseling and mentoring, and access to housing. The facility still has no power, Thompson said, “but as soon as we are able to reopen, every homeless woman or man who enters the door with waterlogged shoes will be able to receive a new pair. What a phenomenal act of generosity.”

Thompson is helping to coordinate the rectors of Houston’s largest Episcopal churches to respond in the recovery effort. He noted on Aug. 31 that “this work is in no way restricted to the Episcopal Church,” citing Wells, along with the Rev. Tommy Williams of St. Paul’s United Methodist Church and Rabbi Oren Hayon of Temple Emanu El.

“I’m humbled and blessed to witness the faith community in action,” he wrote. “For those who say the world would be better off without the church, I say visit Houston.”

Many congregations will be taking up special collections on Sept. 3 for the work of Episcopal Relief & Development. Individual donations can be made here.

The organization, in partnership with the Episcopal Diocese of Texas, is responding to the immediate needs of people in the Greater Houston area, including Galveston. That support will help the diocese provide temporary housing for 50 families, recruit volunteers to help clean out homes and deploy trained, spiritual care teams to reach out to people evacuated to the George R. Brown Convention Center and in other hard-hit areas.

Those teams are also distributing gift cards to help with purchasing food, basic supplies and necessities. The organization said its U.S. Disaster Program staff is in regular contact with the affected dioceses in Texas and Louisiana.

“Our church partners are providing critical assistance and caring for their neighbors in the aftermath of this devastating storm,” said Robert W. Radtke, president of Episcopal Relief & Development. “I am deeply grateful to them and to our community of faithful supporters for their compassion and enormous generosity.”

At the Diocese of Western Louisiana office, Holly Davis, communications missioner, said she was without power and cell phone service for most of Aug. 30 but was back to work by Sept. 1. So far, she had no reports of flooding at the diocesan churches.

Dee Drell, senior warden at St. James Episcopal Church in Alexandria, which is northeast of Lake Charles and in the center of the state, said his and Leggett’s church will do a special offering for relief efforts Sept. 3.

Louisiana’s mega-shelter in Alexandria is filling up with flood victims, Leggett said. More than 1,100 evacuees filled the 2,500 beds by the evening of Aug. 31, according to The Town Talk newspaper. “And now we’re expecting the shelter to overflow with people coming in from Lake Charles,” said Leggett, who’s also a part-time TV news producer.

Across the Diocese of Louisiana, Episcopalians are remembering the generosity of the wider church after the devastation of Hurricane Katrina, and they are responding by collecting supplies and money. The diocese’s Facebook page is filled with such notices.

The Rev. Deacon Elaine G. Clements, the Louisiana diocesan disaster coordinator, reiterated the warning, however, to keep it simple and stick to monetary donations for now, unless there is a personal relationship with someone on the ground in the most affected areas.

“Two days ago, Houston needed diapers; now they are overflowing with diapers. Distribution and storage is a nightmare. So, money to Episcopal Relief & Development and gift cards [to local churches] are the way to go,” Clements told Episcopal News Service.

Still, some churches are trying to donate material goods. Christ Church in Covington, Louisiana, has given 100 blankets to a shelter Houston. The donation started when a friend texted the Rev. William Miller: “I had to tell 300 people that we were out of blankets. If you could have seen the look in their eyes…”

Miller, the church’s rector, writes here about the quest that followed. The Rev. Scott Painter, curate at St. Stephen’s Episcopal Church in Houston and Miller’s friend, found his way to a Costco store that had just reopened and that had blankets. He texted photos of the options and Miller had him buy 100, sending him a check. Painter delivered them to NRG Stadium, where 10,000 people were expected by the end of that day.

“In the grand scheme of relief efforts, in a swampy region spread out over a vast territory with 6 million inhabitants, 100 blankets delivered to one shelter probably won’t make much of a difference,” Miller wrote. “But for the 100 people at the shelter who end up with one, it might make some difference. And you and I can each make some difference. Together, we can make a big difference.”