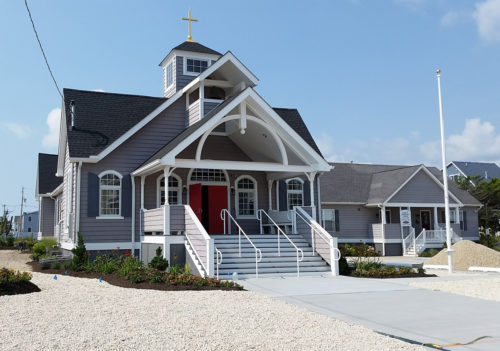 [Episcopal News Service] They have clergy every Sunday, but few have a priest to call their own. Most are only open for a few weeks, but some meet every Sunday of the year. Most Episcopalians have never set foot in one, but for those who have worshipped in them for years, they are imprinted on their faith journeys.

They have been compared to Brigadoon, the mysterious Scottish village that legend says appears for only one day every 100 years. However, the summer chapels of the Episcopal Church, most with three months or less of seasonal life, have far more staying power.

For more than a century, these often-small buildings have weathered changes in church attendance and vacation trends. They evoke an era when people decamped from the heat of the city to “summer” in the natural beauty of the countryside, preferably near a body of water, large or small.

Far away from their winter church homes, Episcopalians pooled their money and built chapels in those summer enclaves. The chapels have a deep hold on generations of summering families. Many people, along with some newcomers, mark the major passages of their lives in the chapels: baptisms, weddings, even memorial funerals.

Regardless of their deep hold on some Episcopalians’ faith lives, the chapels have tenuous – and varied – relationships with the dioceses in which they exist. Some chapels are held by private trusts, some are incorporated, some are associated with Episcopal summer camps, some are missions of nearby year-round congregations. Very few file the annual Parochial Report required of year-round congregations. Most have no formal list of members because most of the Episcopalians who worship in them officially belong to other congregations. Some dioceses prevent seasonal chapels from formally enrolling members.

Thus, an accurate count of their number and attendance is hard to come by. Kirk Hadaway, the since-retired Episcopal Church officer for congregational research, compiled a list in 2015 of known seasonal chapels. It held the names of 85 such chapels, but he acknowledged that there might be more. The list ranged from St. Francis of the Mountains in South Lake Tahoe, California, and St. Hubert the Hunter in Bondurant, Wyoming, to some in the Midwest and a long chain of chapels lining the Eastern Seaboard from Maine to Florida. 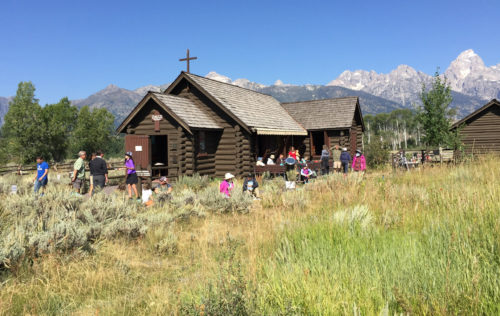 The Episcopal Chapel of the Transfiguration, built in 1925 very near Grand Teton National Park and now a part of St. John’s Episcopal Church 15 miles away in Jackson Hole, Wyoming, held an eclipse service on Aug. 18. Afterward, the congregation went outside to witness the 2:20 minutes of totality. The 65-seat chapel offers two Eucharists each Sunday in summer. St John’s also has a summer Sunday service at the Chapel of St. Hubert the Hunter in Bondurant, 35 miles from Jackson. Photo: St. John’s Episcopal Church

The chapel with the newest building on that list is, arguably, St. Elisabeth’s Chapel, just steps from the Atlantic Ocean in Ortley Beach, New Jersey. Nearly five years after Superstorm Sandy swept the chapel off its moorings, across Barnegat peninsula and into the bay during the night of Oct. 29, 2012, the congregation has rebuilt. New Jersey Bishop Williams “Chip” Stokes dedicated that $1.2 million building this past July.

“When the chapel went down, we all mourned the loss and realized that we couldn’t mourn too long because we had to rebuild,” Senior Warden Dennis Bellars said.

The old chapel sat about 70 people; the new cedar-lined building can hold 120 comfortably, according to Bellars. The altar furniture and the pews are new. The bishop’s chair, which was found wedged in Ortley Beach’s wreckage, has been restored. Bellars even found an antique bell for the new steeple that was made in 1885, the year St. Elisabeth’s was founded.

The congregation combined the proceeds of a capital campaign with its insurance settlement from the lost chapel and added some congregational savings to finance the project that began in 2015. A member of the summer congregation pledged the largest individual amount to the effort. (While St. Elisabeth’s is classified as a summer chapel, it is open for worship all year. It averaged 40 people per Sunday during the 2016-2017 winter months.)

“The neighborhood is very, very pleased to have us back,” Bellars said, although he joked that he worries about the loudness of the “new” old bell.

Seasonal chapels “fill a need for the summer people to worship in an Episcopal service,” Bellars said.

“The people that go to summer chapels are really faithful,” said Stokes. “They understand that God doesn’t take a vacation.” Returning to their chapel every summer “is the way by which they keep up the rhythm of their faith lives and stay connected to their life in Jesus Christ, and remain connected to a community that they’ve been part of, for many of them, since they were children.”

“You walk into some of these places and that comes through loud and clear,” Stokes said. “That’s really quite special.”

Sometimes, the seasonal opening of a summer chapel means even local Episcopalians will choose to worship there. Their move can cause attendance and, sometimes, giving to dip at nearby full-year churches. While recognizing that this can be a bit disruptive and might raise the question of the best use of resources, Stokes sees “health, vitality and life” in the seasonal communities and in their neighboring churches.

“Some people discover Jesus when they see these pretty churches and chapels and maybe wander in during the summer,” he said. “What a nice thing, what a grace-filled thing.”

Stokes, whose family used to vacation in Bay Head, New Jersey, and did believe that “God took a vacation in the summer,” remembers pedaling his bike past All Saints Episcopal Church and hearing the hymns coming from what was then a summer chapel. The chapel, founded in 1888, became a year-round congregation in the mid-1980s.

Episcopalians in the pews are not the only ones for whom summer chapels are a tradition. Many priests – and their families – look forward to coming back for a few weeks each season to serve the congregations. Plus, along with taking the services and being available for pastoral care, they get vacation in popular, scenic spots.

Stokes recalls earlier in his ministry when he spent nine years with his wife, Susan, and their family opening the season at St. John’s Episcopal Church in Harbor Springs, Michigan. Stokes explained that the seasonal position, which came with a stipend and a house, provided a “respite” for his family, which then included his wife, four children and a nephew who was living with them. Stokes was a curate earning $23,000 when he got the chance to serve on the clergy rotation for St. Andrew’s by-the-Sea in Saltaire, New York, on Fire Island.

“I can promise you I would never have been able to afford a beach house rental on Fire Island,” he said. “My kids remember that as some of the best times of their lives.”

The Very Rev. Timothy Kimbrough, dean of the Christ Church Cathedral in Nashville, Tennessee, would agree. His 28-year stint as one of the priests for the Episcopal Church of St. Simon-by-the-Sea, a summer chapel in Mantoloking on the Jersey Shore, has frequently served as his family’s vacation.

“It always felt like grace and like you just sort of stumbled into this privilege,” he said.

Kimbrough has roots in the area. He was a boy in 1962 when his parents moved to nearby Bay Head, where his Methodist minister father took a small church for four years while working on a doctorate at Princeton. 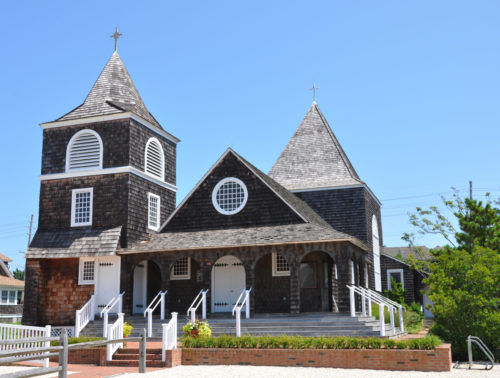 St. Simon-by-the-Sea was built in 1889 on land donated by Frederick W. Downer, the founder of Mantoloking, New Jersey, who was a Presbyterian. The church became an Episcopal church because the first minister was an Episcopalian, according to the church’s website. It is believed to be a copy of a Norwegian fishermen’s church. Photo: Mary Frances Schjonberg

During what Kimbrough called the last chapter of his father’s working life, his family moved back to Bay Head and his father commuted to New York. His mother became an Episcopalian at All Saints in Bay Head after Kimbrough was ordained an Episcopal priest in 1984.

Having been a part of the St. Simon clergy roster for so long, Kimbrough said that “a collection of relationships begins to form that become dear.” Those relationships, some of which were forged during one summer when the congregation lost a young member in a traffic accident, are now a large part of what makes Kimbrough and his wife agree to come back every summer, even now that their children are grown.

Summer chapels have both a ministry and a mission, he said, to busy people who are taking a summer break. They can be, he suggested, a place where people can “actively cultivate the spiritual when, maybe in the rest of their lives, life has gotten too busy to do that.”

Kimbrough said when “we are all trying to come to terms with what it means to be church” and when the church is exploring new ways of reaching people, “the summer chapel is not just a point of contact where the faithful are able to maintain the habits of faith.”

It might also be, he said, “where people, maybe, who aren’t otherwise exposed to the gospel or who haven’t developed regular habits of faith in the winter, have the opportunity to be exposed to good news and have the possibility of developing them.”