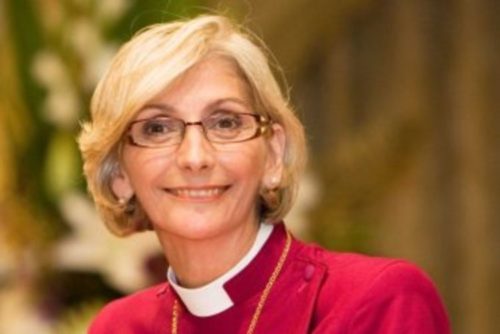 [Anglican Diocese of Perth] The Rt. Rev. Kay Goldsworthy, bishop of Gippsland, has been elected archbishop of Perth after an extensive eight-month selection process and has the honour of being the first woman elected in Australia to the role of archbishop.

The Archbishop Election Committee of 10 lay people and 10 priests considered candidates from around the world, electing a candidate who has served with distinction for almost a decade as a Bishop in the Australian Church.

The administrator of the Anglican Diocese of Perth, the Rt. Rev. Kate Wilmot, welcomed the election of Goldsworthy, commending her commitment and significant experience.

“The archbishop-elect has fulfilled her ministry for more than three decades in three Australian Dioceses and brings a breadth and depth of wisdom and an ability to collaborate with diverse members of the Church community,” Wilmot said.

“Bishop Kay was one of the first women ordained to the priesthood in St George’s Cathedral in 1992 by Archbishop Peter Carnley and in 2008 she was consecrated as the first woman Bishop in the Anglican Church of Australia by Archbishop Roger Herft,” Wilmot said.

“Bishop Kay has a wealth of diocesan, national and international experience, including being a long-standing member of General Synod and a member of the international Anglican Consultative Council. The Archbishop-elect is well known in Perth and has displayed excellent leadership and hospitality across the Perth community. We are very much looking forward to welcoming Bishop Kay and her husband Jeri James back to the Perth community.”

The installation of the eighth archbishop of Perth, and metropolitan of the Province of Western Australia will take place in St. George’s Cathedral, Perth, Feb. 10, 2018.