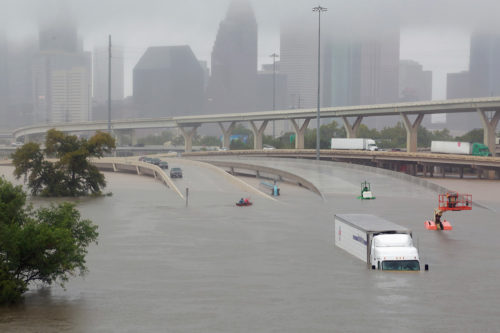 [Episcopal News Service] As Hurricane Harvey stalled over the Houston area causing catastrophic and deadly flooding, Episcopalians across south Texas are assessing the unprecedented storm’s damage while finding ways to help their neighbors.

Episcopal Relief & Development staff is coordinating with the dioceses of Texas, West Texas and Western Louisiana on potential assessment and response efforts.

“Our brothers and sisters in Texas now need our help,” Presiding Bishop Michael Curry said in an update on the organization’s website. “Our support of Episcopal Relief & Development is a tangible, practical, effective and reliable way to do that, not just in the short term, but for the long haul. Thank you for whatever you can do for together we are the human family of God.”

Katie Mears, director of Episcopal Relief & Development’s U.S. Disaster Program warned that “Hurricane Harvey is not over yet.”

“Leaders in Texas and Louisiana have extensive and valuable experience with responding to disasters,” Mears continued. “While it is certainly a challenging time, this wealth of experience allows diocesan leaders to develop an effective response to present needs and compassionately provide critical information in the days and months to come.”

Various media outlets are reporting that between two and five people have died because of Harvey. That toll is expected to rise.

“It’s absolutely mind-boggling,” Carol Barnwell, Diocese of Texas director of communications, said of the situation in Houston on Aug. 28.

Diocesan spiritual care teams are heading to the George R. Brown Emergency Center at the Houston Convention Center where some of the thousands of evacuees are being sheltered, she said.

Most every freeway running around and through the city of 6 million is flooded, and on Aug. 28, Texas Bishop Andy Doyle warned Episcopalians who might want to answer the center’s call for volunteers to “check your route for water hazards before you go.”

Flood waters have reached the top of single-story homes and people could be heard pleading inside, the Associated Press reported.

At midday Aug. 27, a U.S. Coast Guard incident commander urged residents to avoid sheltering in their attics to escape the rising flood. Instead, Capt. Kevin Oditt urged people to head to their rooftops and wave sheets, towels or anything else to attract the attention of helicopter crews.

Jack Beven, senior hurricane specialist, said in his Aug. 28 morning Tropical Storm Harvey Forecast Discussion on the National Hurricane Center website that there have been reports of close to 30 inches having already fallen in the greater Houston area. With more on the way, rainfall totals could reach 50 inches in some locations, “which would be historic for the area,” he said.

Conditions are changing by the hour. The rains are “currently producing catastrophic and life-threatening flooding over large portions of southeastern Texas,” according to the National Hurricane Center’s Aug. 28 afternoon advisory. Forecasters said Harvey is “drifting erratically” toward the east-southeast. They predicted the center of Harvey will linger just offshore of the middle and upper coasts of Texas through Aug. 29.

The storm could produce an additional 15 to 25 inches of rain by Sept. 1 over the upper Texas coast and into southwestern Louisiana, the advisory said.

Houston is all too familiar with hurricanes and tropical storms but, Barnwell said, typically the storms crash in and, after a few hours, the sun is back out and people can start picking up the pieces. Not so with Harvey.

“This is basically a week-long hurricane,” she said.

“You can’t imagine the noise of the rain falling straight in big, giant drops. It’s like someone poured a huge pitcher of water,” Barnwell said. “The sound is thunderous from the water coming down. That will go on for an hour or so and get you really nervous and then it will slack off.”

Doyle told Episcopalians on Aug. 27 that “we need to wait until the danger has passed to make our response so as not to complicate further the ongoing rescue operations.”

Doyle said, “Put on your church T-shirt and take care of your neighbors. Have a potluck supper if you can. If you’ve got power, invite people to come and charge their phones,” according to Barnwell.

The diocese activated its AlertMedia app, which it is running as part of a nine-diocese pilot project with Episcopal Relief & Development, to collect information about people and places in the diocese. AlertMedia sends a message to congregational leaders asking for a status report. Barnwell said she was compiling that information and attempting to contact people on the afternoon of Aug. 28.

AlertMedia is a cloud-based disaster communications tool that sends and receives messages to large groups of people via SMS, email and voice calls.

The diocesan staff is scattered around the Houston area because the diocesan office has been closed since noon on Aug. 25.

Most are working from home. However, the Rev. Kai Ryan, the diocesan canon to the ordinary and chief operating officer, has “feet of water in her house,” Barnwell said, and was evacuated with her family from their home Aug. 27 by rescuers in a Humvee.

Rescuers, official and volunteer, have been working all over the city in a variety of water-worthy vehicles and vessels. It is gratifying, Barnwell said, “watching strangers helping their neighbors; it’s amazing.”

Barnwell contacted ENS from her home in the University West section of Houston where her street had flooded and receded five or six times since Harvey’s arrival. The street fills up and the water begins to cross the sidewalk and creep up the grass. “It’s been draining really well, but at some point, it’s going to stop draining because there’s no place to go,” she said.

So much rain has fallen on the Houston area that the U.S. Army Corps of Engineers decided Aug. 28 to release water from two dams due to the rising waters. Those releases will aggravate flooding but the Corps said with the reservoirs rapidly filling, it must reduce their levels. Barnwell said one church, St. Catherine of Siena, could face flooding. Many of those parishioners were under a mandatory evacuation order as of the afternoon of Aug. 28, as are 90 percent of the members of Calvary Episcopal Church in Richmond.

Two small Diocese of West Texas churches were in its path: St. Peter’s Episcopal Church in Rockport and Trinity Episcopal by the Sea just to the south in Port Aransas. It appears to diocesan officials that St. Peter’s sustained only minor damage, Communications Officer Laura Shaver said.

The Rev. Jim Friedel, St. Peter’s rector, has not been able to get into the town yet, so Shaver said the information is somewhat speculative. However, they’ve received reports that some siding is missing from the bell tower and from the north side of the building.

Trinity parishioners boarded up their church on Aug. 23 before they evacuated. “The Lord Bless You” was spray-painted on plywood covering one of the doors.

Trinity’s rector, the Rev. James Derkits, went with his family to College Station, north of Houston, where he led prayers for the church at St. Francis Episcopal Church, according to Facebook posts.

Derkits got into Port Aransas Aug. 28 to see the damage firsthand. He reported that, while the building withstood Harvey, Trinity’s rectory and the church exterior sustained “significant damage” but the sanctuary is in “great shape.”

An Aug. 27 video on Trinity’s Facebook page show the church before and after Harvey, as well as the diocese’s Mustang Island Conference Center. Shaver said she is not certain who shot that video.

More than 20 Episcopal churches in the Corpus Christi area faced Harvey. “We’re still gathering information,” she said. “There are some of our coastal communities where even residents are not allowed to get back in yet. So, we don’t have a lot of information.”

It appears that all Episcopalians in Harvey’s path are safe, Shaver added.

Inland in the diocese, Episcopalians are assembling hygiene kits that first-responders and others in the affected areas can give to Harvey survivors.

“Sooner or later, the big organizations are going to leave and that’s when we feel our church people will be able to go down there and help people rebuild their lives,” Shaver said.

Shaver spoke to ENS from the diocesan offices in San Antonio. She and her family left their home in Portland, northeast of Corpus Christi across Corpus Christi Bay, the afternoon of Aug. 24. Their home is still standing, but the family lost a fence and some trees, she said.

It is unusual for West Texas to have to plan hurricane relief. The most-recent natural disaster occurred over Memorial Day weekend in 2015 when a flash flood struck the city of Wimblerly, located far inland between San Antonio and Austin. Diocesan officials are drawing on some of the resources they developed at that time, Shaver said.

“I cannot think of a time when our cities were a direct hit like this,” she said.

“We’re not encouraging anybody to go [to the affected areas] right now,” Shaver added. “We are in communication with the Diocese of Texas as they deal with the incredible amount of flooding, and our hearts and prayers are now with them. The situation is kind of flipped and I know that when the time comes, we’ll all work together and our people will be there for each other.”

Officials from the National Association of Episcopal Schools are surveying the area’s Episcopal schools to assess damage, check on closings and determine what resources they can provide storm victims, said Jonathan F. Cooper, the association’s communications manager.

Cooper said he wasn’t sure yet how many schools were affected so far by Hurricane Harvey, but the association has 58 member schools in Texas and Louisiana. Shaver estimated there are six schools affected in the Diocese of West Texas. In Houston, there are 19 member and nonmember Episcopal schools, including preschool, primary and secondary levels.

Although the start of the school year varies widely among private schools, at Southern schools, particularly those in Texas, the year usually starts earlier than in the North, Cooper said. Many Texas schools would have started their fall term within the last two weeks and many of those schools are now closed again until after Labor Day. 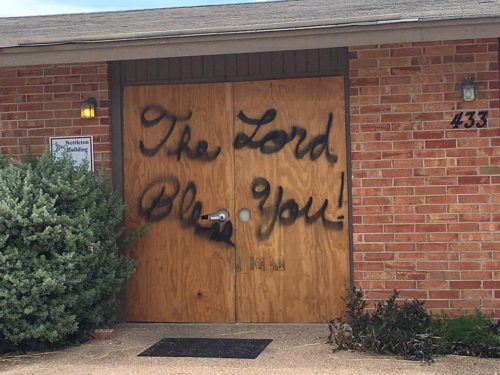 Trinity by the Sea parishioners boarded up their Port Aransas, Texas, church on Aug. 23 before they evacuated. “The Lord Bless You” was spray painted on plywood covering one of the doors. Photo: Trinity by the Sea via the Rev. James Derkits and Facebook

Meanwhile, Louisiana is warily watching Harvey as residents there recall Hurricane Katrina, which hit the state about the same time 12 years ago.

“The Diocese of Western Louisiana continues to prepare for what might be coming in the following days,” the Rev. Deacon Lois Maberry, Western Louisiana’s diocesan disaster relief officer, said in a statement. “We remain in communication with the dioceses of Texas and West Texas to provide resources as they are presented to us. Presently, our plan of action is to stay alert and continue pray for the safety of our neighbors.”

Members of the Diocese of Louisiana are watching and waiting as well.

“All it will take is for one of those rainbands to move over us and stall out in order to experience disastrous flooding,” said Karen Mackey, Louisiana’s diocesan communications coordinator.

The Rev. Deacon Elaine G. Clements, Louisiana’s diocesan disaster coordinator, said she can’t predict how the water pumps will hold up, but the diocese is cautiously optimistic that the predictions of 4 to 10 inches of rainfall — not an unusual amount for the area — will be accurate. So, Clements and other Episcopalians have turned their attention to helping neighbors in Texas, and if it becomes necessary, to Western Louisiana.

“We stand ready to help but know that the Episcopal Church is there for the long haul, there when everyone else is gone,” Clements said. “We have walked in these shoes so many times ourselves and know how much we must depend on one another during them.”