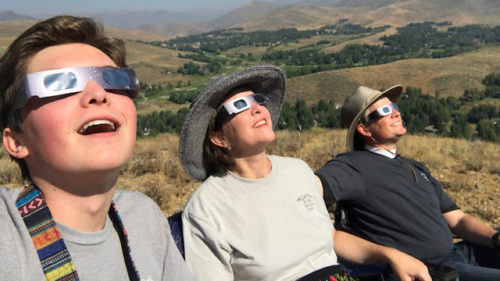 The Rev. Ken Brannon, rector at St. Thomas Episcopal Church in Sun Valley, Idaho, wears protective glasses and looks to the sky with his wife, Rachel Brannon, and son, 16-year-old Isaac, as they await the total solar eclipse on Aug. 21. Photo courtesy of Ken Brannon

[Episcopal News Service] The Rev. Ken Brannon chose to close St. Thomas Episcopal Church for the morning on Aug. 21, because when you live in Sun Valley, Idaho, or any other point along the path of a total solar eclipse, no one wants to spend peak viewing hours indoors.

“It was just gorgeous,” Brannon told Episcopal News Service by phone after watching the eclipse with his wife and son on a ridge near their home.

This was the rare solar eclipse in which, weather permitting, the moon could be seen blocking at least part of the sun across the whole continental United States. The most special viewing, however, was reserved for those in the narrow path of the total solar eclipse, across 12 states from Oregon to South Carolina. There, the peak eclipse, or “totality,” lasted mere minutes, though the memory will last a lifetime.

“It’s like you are looking at perfection. It’s just an amazing experience,” said the Rev. Alice Nichols, rector at Grace Episcopal Church in Hopkinsville, Kentucky.

The city had marketed itself as “Eclipseville” because it was the point where the moon’s shadow took its most direct aim at the Earth during the total eclipse. The church, meanwhile, had marketed itself as a prime viewing site, and the Grace Episcopal viewing party drew about 35 people, including some from as far away as New York.

The weather was ideal, Nichols said, and the experience spiritual.

“It was like a moment of seeing the holy,” she said. “And you had nothing to do with it. It was just a gift.”

With Americans everywhere getting caught up in eclipse fever, Episcopalians joined the craze – grabbing protective glasses to gaze skyward individually or in faith gatherings and viewing parties.

Anticipation ran high even in the parts of the country outside of the path of totality. The Episcopal Church of the Resurrection in Spokane, Washington, organized a viewing party. Holy Trinity Episcopal School in Houston, Texas, tweeted that it had bought its whole school eclipse-watching sunglasses to enjoy the show in the sky.

We've bought our whole school eclipse glasses to enjoy the partial eclipse we will see at 1 PM.

Episcopal Service Corps in Baltimore organized a labyrinth walk during the eclipse.

St. Peter’s Church in the Great Valley, an Episcopal church in Malvern, Pennsylvania, reported that about 70 parishioners and neighbors attended the congregation’s viewing party.

“It was a great success,” said Charlene Hanbury, one of the organizers.

The group at St. Peter’s began dispersing shortly after the few moments of peak eclipse had passed. After helping to clean up, Hanbury said, the partial eclipse was still concluding, so she took a few minutes to stare up and marvel at the sight.

When organizers of the ecumenical Faith, Art and Creative Expression: A Liturgical Arts Conference saw their 20th anniversary conference this year would straddle eclipse day, they chose as their theme “Darkness Transformed Into Light.”  It  is being held in Hendersonville, North Carolina, at Kanuga, a conference and retreat center with Episcopal roots. Kanuga was out of the path of totality, but the 40 or so conference participants took a bus trip Aug. 21 to Greenville, South Carolina, to experience the total solar eclipse.

They gathered at St. Peter’s Episcopal Church in Greenville for prayer, music and a picnic lunch before the skies darkened as the moon began passing in front of the sun.

For about an hour leading up to the total eclipse, “it was a very sweet kind of meditative time,” conference coordinator Lark Howell said. Then as soon as totality ended, the group began a worship service and celebrated the Eucharist, the day getting brighter and brighter as the service progressed.

Some congregations held events leading up to eclipse day. St. Andrew’s Episcopal Church in Carbondale, Illinois, held a cosmic-themed hymn sing the evening before the eclipse. Members of St. Patrick’s Episcopal Church in Madison Heights, Michigan, attended “Love Eclipses Hate,” a community event held Aug. 20 at a city park as a message against hatred and fear.

Alliance, Nebraska, was a prominent epicenter of eclipse-watching buzz this week. The small city on the Nebraska Panhandle was in the path of totality, promised good weather and is home to the Carhenge art installation.

For Dixie Nelson, parish administrator at St. Matthew’s Episcopal Church in Alliance, it also was a successful fundraiser. Renting campsites on church property raised about $4,000 for the congregation, and the influx of about 150 to 175 visitors made for a communal atmosphere during the eclipse.

God’s show didn’t disappoint, Nelson said. As the sky grew darker, the wind picked up and the temperature dropped, but the wind seemed to halt during the brief total eclipse, when the sun created a halo-like corona around the moon.

“It’s just an awesome experience,” said Nelson, who had spent the last six months planning the church’s viewing party and makeshift campground. “This totally was worth every minute of it.”