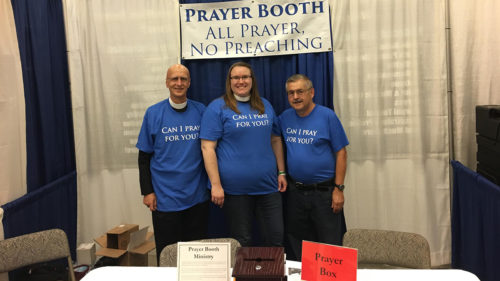 From left, the Rev. Kevin Stewart, the Rev. Mindy Valentine Davis and Frankie A. Aliota staff the prayer booth at the Washington County Fair south of West Bend, Wisconsin. Photo: Diocese of Milwaukee

[Episcopal Diocese of Milwaukee] The theme of the Diocese of Milwaukee’s Leadership Days in the spring was trying new things to engage the community. The Rev. Mindy Valentine Davis decided to respond to that call by taking her cue from a Milwaukee ministry called Collars on the Corner.

Along with members of her parish, St. James Episcopal Church in West Bend, Wisconsin, she spent six days at the Washington County Fair at the end of July sitting at a booth inviting people to submit their prayers in prayer boxes.

The Rev. Kevin Stewart, a deacon and the diocese’s missioner for community engagement, had spoken at a meeting Davis attended about his work in and around Milwaukee with Collars on the Corner. Stewart is one of the driving forces of the ministry of prayer and presence. Clergy members gather  on Milwaukee-area street corners with prayer boxes and an offer to pray with passersby. They also have placed prayer boxes at a number of locations throughout the region.

“Every time you drive south [from West Bend] to Milwaukee, you pass by the fairgrounds,” Davis said. “As I was passing by one day, I thought, maybe we should have a prayer booth. It just had to be the Holy Spirit.”

So, inspired by Stewart’s ministry, Davis gathered members of her parish, a couple prayer boxes, hundreds of pens imprinted with the words “God loves you” and headed to the fair.

For Davis, spending time being present and praying with people is done in service of the public, not to get more people in church.

The prayer booth was a way that St. James could be in the community and be Christ to people. “Episcopalians like the fact that we’re free thinkers and we don’t like to have Jesus shoved down our throats. People (in our community) believe in God and the power of prayer, but many don’t have to have a church community to pray with and for them. The booth was a non-threatening way to serve them and others.”

Davis and the other members of her church showed up wearing T-shirts that read, “Can I pray for the you?” and sat at a table in the pavilion with a sign that said, “Prayer Booth―All Prayers, No Preaching.” The group waited to see if anyone would bring their prayers.

In their six days at the fair, the booth volunteers gave away 700 pens, received hundreds of slips of papers with prayers written on them and prayed with at least a dozen people. They even had a prayer box for kids. “Children were encouraged to write their prayer or even draw a picture of what they were praying for,” Davis said.

“Some of the prayers just get to you,” she said. “There was this little boy who kept coming back.” Returning several times, he wrote out several prayers, including the following:

All foster children will be adopted.

“We got real prayers in the boxes, prayers that one wouldn’t ordinarily admit to someone,” Davis

Please pray for my drug addiction.

“I have stories about speaking with and praying with adults,” she said. “Walking to the booth and around the fair, my parishioners and I got stopped a few times by people who wanted us to pray for them. To our surprise, people would read our shirts that said, ‘Can I pray for you?’ and just say, ‘Yes.’ It would take us a second to realize what they meant.  We’d then stop and pray with them right then and there.”

David and members of St. James were joined by Stewart two of the days at the fair. “The good people of St. James invited me to join them in reaching out in their community,” he said. “I was moved by the whole experience. In my time serving as missioner for community engagement, a theme has emerged: Where is the church other than on Sunday mornings? Being with the good people of St. James at the fair helped to answer that question. It was an expression of the people of God being visible and present and caring outside their church walls.”

One of the most touching stories involved a little girl with short curly hair and beautiful blue eyes.  She couldn’t have been more than 4 or 5 years old. She came with her family, which included two other children. They were invited to write down their prayers.

The girl was wearing a shirt that read something about Hayley and leukemia. “I said, you know a Hayley with leukemia? We can pray for her. The little girl then pointed to herself,” David said. “It then dawned on me, and I asked, ‘You’re Hayley?’ So, I told her that if she drew a picture of herself that we’d pray for her.” 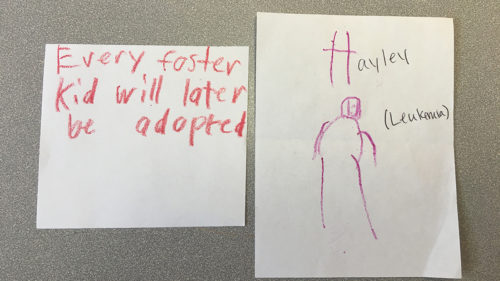 There was no real training for the church members that manned the booth. “I gave them instructions and told them that they were there for presence, and the Holy Spirit will guide them and give them utterance,” Davis noted. “I had the prayer books there, but they weren’t needed. I knew no matter what, the Holy Spirit will give the words.”

After such a meaningful week at the fair, Davis plans to get her parish members together to reflect and share stories.

“The Episcopal Church has got to get out of its doors,” she said. “I think God loves our worship, but we’re called to do more than sit in a building. If we can be out showing that God is present in a non-threatening way, then we’re planting seeds.”

— Sara Bitner is communications officer for the Episcopal Diocese of Milwaukee.