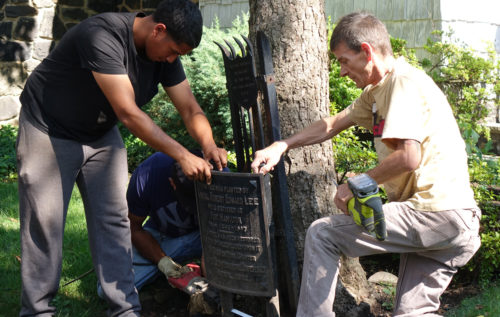 [Episcopal News Service] A work crew sawed off two Robert E. Lee plaques from a tree on church property in south Brooklyn, New York, fewer than 24 hours after the Episcopal Diocese of Long Island received the first of many calls about the Confederate memorial.

The Rev. Khader El-Yateem, a community activist and founder of Salam Arabic Lutheran Church in the Brooklyn neighborhood of Bay Ridge, made the first call, responding to concerns he heard Monday from community residents.

At issue: Two tree plaques at St. John’s Episcopal Church in Fort Hamilton, near the still-active military base in Brooklyn. More than a decade before Robert E. Lee led the Confederate Army, he was stationed from 1842 to 1847 at the U.S. Army’s Fort Hamilton. He was a member of the church, along with Stonewall Jackson, who was baptized there, said Long Island Bishop Lawrence Provenzano. Lee planted a tree near the church, and the plaques commemorate him.

The first Brooklyn plaque was placed in front of a maple tree in April 1912 by the United Daughters of the Confederacy, according to the sign, near where Lee had once planted a tree. The tree died, and the Confederate group replanted it in the 1930s, and then again in the 1960s, Provenzano said. The church’s last service was in September 2014, and the building is under contract to be sold. The congregation merged with Christ Church in Bay Ridge.

El-Yateem called the diocese at 10:30 a.m. Aug. 15. By 10 a.m. Aug. 16, the plaques were being taken down, to be stored in diocesan archives. He said he’s grateful for the quick response. “We needed to take that sign down in support and solidarity of those who are victims of hate and racism in this country,” El-Yateem said.

The removal was covered by local and national media, and was featured on social media platforms.

The Brooklyn removal was part of a wave of swift actions taken by leaders across the United States to remove public memorials of Confederate leaders. The removals come days after white supremacists, white nationalists and neo-Nazis converged onto the University of Virginia campus in Charlottesville this past weekend, protesting the removal of a Lee statue. After violent clashes with counter-protestors, three people were killed and dozens injured. Clergy from Charlottesville’s three Episcopal churches were part of a peaceable faith-based contingent of the counter-protesters, and none were injured. 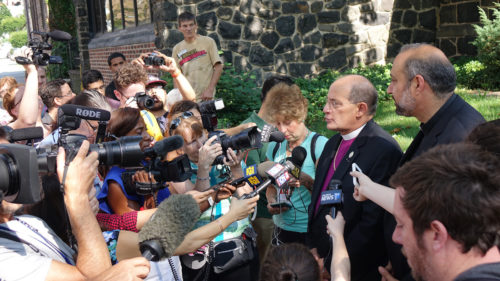 “We’re in a mess with the rhetoric coming out of the White House and how people are feeling emboldened by the rhetoric,” Provenzano said. “I think this is a moment for the church. We’ve got to preach the gospel and more importantly, live it. Shame on us for not removing those plaques before it was brought to our attention. This pastor reminded us that when people pass this church property, there’s a commemoration to a general who fought to preserve slavery.”

In the last two days, Provenzano’s office has fielded about 120 calls and emails about the church’s plaques, a ratio of 2-to-1 in favor of removal, from his estimation. The negative calls and emails included people he identified as neo-Nazi and white supremacist. “Those were nasty,” Provenzano said.

Responding to President Donald Trump’s Tuesday afternoon press conference in which he warned of the slippery slope of removing statues of historical figures who had anything to do with owning slaves, including Presidents Jefferson and Washington, El-Yateem said that’s not the same. There’s a big difference between a historical figure who owned slaves and one who led a war against the United States to preserve slavery, El-Yateem said.

“General Lee needs to be remembered, but not celebrated in our churches and streets. Because of his actions, over 300,000 people died as he fought to preserve slavery in this country,” El-Yateem said.

The plaques and statues shouldn’t be erased, but kept in archives and in museums, he said.

“We’re not denying history, and maybe that some of those times, the church was complicit in it,” Provenzano said. “If we did nothing, I think that would have made us complicit in furthering the concerns of people that issues like this are not important enough for the church to pay attention to.

“I think we did the right thing.”

— Amy Sowder is a freelance writer and editor in Brooklyn.