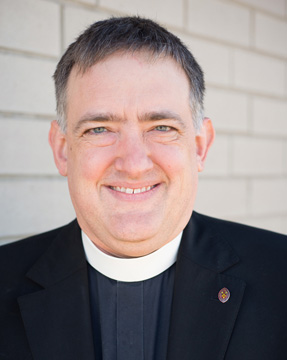 [Episcopal Church Office of Public Affairs] The Rev. Michael Michie has been named the Episcopal Church staff officer for church planting Infrastructure, a member of the presiding bishop’s staff.

In this new full-time position, Michie, from the Diocese of Dallas, will collaborate in the design, development and implementation of resources, strategies and structures that foster a churchwide movement of new ministries. The position is part of the Church Planting and Mission Development Department, which oversees the creation of a churchwide network for planting congregations, recruiting and training church planters, and establishing new ministries throughout the Episcopal Church.

The announcement was made by the Rev. Canon Stephanie Spellers, canon to the presiding bishop for evangelism, reconciliation and creation. “Mike is highly respected and deeply engaged in the work of church planting, and I cannot imagine a better person to join the team,” Spellers said.  “His experience as a successful church planter, his enthusiasm  for the Jesus Movement, and his relationships with ministry partners in this area are all a gift.”

“I come to this incredible opportunity with a fresh experience of what it takes to start an Episcopal church from scratch and get it to sustainability,” Michie said.  “I believe God is reviving our church. The apostolic planting of new works must be a vital part of our contribution to the Jesus Movement.”

Michie will be based in Texas.  He begins his new position on September 11; at that time, he can be reached at mmichie@episcopalchurch.org.

Meet the Rev. Michael Michie
Since 2005, Michie has served as the rector of St. Andrew’s in McKinney, Texas, a congregation he planted and is the founding rector. During his time, the congregation grew to a 650-member church, with a series of community-based ministries, including an outreach program, The Bless Mobile, a food truck ministry.

Prior to that, he was the associate rector of St. Barnabas in Austin, where he assisted in planting the congregation with an emphasis in reaching young unchurched adults, and curate at St Richard’s in Round Rock.

He is a graduate of the Seminary of the Southwest and holds a Master of Arts in ractical Theology from Oral Roberts University Seminary, a Master in Public Administration from Texas State University and a Bachelor of Arts in Government from the University of Texas.