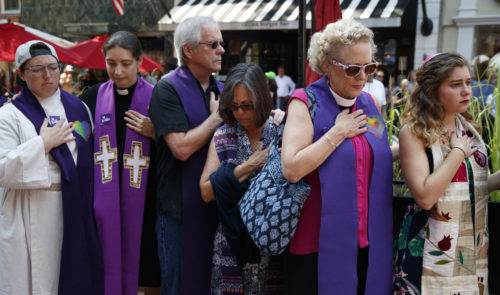 Mourners and clergy, including the Rev. Elaine Thomas, second from right, pray outside the memorial service for Heather Heyer on Aug. 16, 2017 in Charlottesville, Virginia. Photo: Evan Vucci/Associated Press

[Episcopal News Service] Episcopal clergy and other Charlottesville, Virginia, religious leaders joined hundreds of mourners Aug. 16 in remembering the woman killed amid the weekend’s violent clashes between white supremacists and counter-protesters, as the city’s interfaith community takes stock and begins looking ahead.

“They tried to kill my child to shut her up,” Susan Bro, mother of Heather Heyer, said at a memorial service held in Charlottesville’s Paramount Theater. “Well guess what? You just magnified her.”

Heyer's mom: "They tried to kill my child to shut her up. Well guess what? You just magnified her" https://t.co/GFp1fi3XlS

Heyer, 32, was part of a crowd of counter-protesters that was rammed by a car Aug. 12, killing her and injuring 19 others. A 20-year-old Nazi sympathizer from Ohio has been charged with her murder.

The Rev. Elaine Thomas, associate rector at St. Paul’s Memorial Church, was among the Episcopal clergy who turned out for Heyer’s memorial service, part of a larger group of interfaith clergy that gathered earlier in the morning for their first weekly meeting since the weekend melee. Members of the group, known as the Charlottesville Clergy Collective, were prepared to stand outside the theater as a peaceful, protective barrier if necessary – “We want to make sure we are there in prayerful presence,” Thomas said – but no major disruptions were reported at the service.

The collective began meeting nearly every Wednesday this summer to coordinate its response as Charlottesville braced for hundreds of neo-Nazis, Ku Klux Klan members and other white supremacists to descend on the city for what they billed as a “Unite the Right” rally. The city became a magnet for leaders of the self-described “alt-right” movement after the City Council voted to take down a statue of Confederate Civil War General Robert E. Lee, a decision now being disputed in court.

The rally Aug. 12, however, was canceled just before it was to start. The city deemed it an unlawful assembly after club-wielding and gun-toting white supremacists began clashing with counter-protesters, some of whom also carried weapons. Heyer, a Charlottesville paralegal, was killed later in the afternoon.

Several dozen clergy members regularly participate in the Charlottesville Clergy Collective meetings, and Thomas said much of the Wednesday breakfast gathering was spent discussing the weekend’s events and preparing for Heyer’s memorial service.

Charlottesville has become a flashpoint in the national debate over removal of Confederate statues and memorials, said the Rev. Cass Bailey, vicar of Trinity Episcopal Church in Charlottesville, but the collective’s mission remains focused on local outreach.

“The underlying tone has been kind of, how do we define the narrative ourselves, in the sense of here is what Charlottesville is all about,” Bailey said, “as opposed to letting others, who for the most part were outsiders, come into Charlottesville and define that.”

Bailey was traveling on Aug. 16 and wasn’t able to attend the collective’s meeting or the memorial service, but he was part of the group of clergy members who stood in solidarity against racial hatred in the Aug. 12 counter-protests. Bishops from the Episcopal Diocese of Virginia and Episcopal clergy from across the country also linked arms on the streets of Charlottesville.

For Bailey, the importance of participating in such action is written into the mission of his church, a historically black congregation that describes itself today as “an intentional multiracial community of reconciliation, transformation and love.”

“We take our mission statement very seriously and think of that as our work in Charlottesville,” Bailey said. “And the events of Aug. 12 kind of show us that our work is not done and there is much to be accomplished. And we have a role to play as people of God in saying there is some reconciliation that needs to happen and can happen with the power of God.”

Charlottesville isn’t alone in such work. The removal of Confederate statues and monuments has inflamed tensions in other cities, including New Orleans, Louisiana, and St. Louis, Missouri. Efforts to promote racial reconciliation face resistance from those who see it as an attack on local culture and history.

When Baltimore, Maryland, removed its statues of Robert E. Lee and Stonewall Jackson overnight Aug. 15, it did so without fanfare and under cover of darkness in the interest of public safety after the unrest in Charlottesville.

And in New York City on Aug. 16, Episcopal Diocese of Long Island Bishop Lawrence Provenzano removed two plaques honoring Lee at an Episcopal church where the Confederate general once attended while he was stationed at the nearby Fort Hamilton army base. The army base recently drew both support and criticism for its decision not to rename two streets on the base that bear the names of Lee and Jackson.

The Episcopal Church’s General Convention also has weighed into the debate, passing a resolution in 2015 condemning the Confederate battle flag as “at odds with a faithful witness to the reconciling love of Jesus Christ.”

Bailey, the Trinity Episcopal vicar, noted that Charlottesville residents chose different ways to show their opposition to the white supremacists who came to town. Some preferred to ignore the racist demonstration altogether, so as not to validate the supremacists. Others, like the Episcopal clergy members, felt it was important to present alternative views peacefully and publicly.

And some counter-protesters chose to be more confrontational.

For the Episcopalians who joined with the Charlottesville Clergy Collective in the counter-protest, “our role was to show that there is a nonviolent way to stand up against the ideas of the so-called alt-right … a way to do that with integrity, without violence.”

When asked about the subset of counter-protesters who chose to bring rifles, clubs and chemical spray, Bailey said, “I think when you show up with a weapon, it’s pretty hard not to use it when you are threatened or when the situation escalates.”

Bailey thinks tensions will subside with the removal of the Lee statue. The City Council voted in February in favor of removal, but that has been on hold while opponents of the decision pursue a lawsuit seeking to stop it.

“It would be a release valve,” Bailey said, while acknowledging that it is impossible to say whether supremacist groups would focus more or less attention on Charlottesville if the statue were removed.

For many in this city, life goes on – possibly with a greater sense of purpose.

Heyer’s family and others who knew her described her at the Aug. 16 memorial service as someone with a passion for fighting injustice, a passion they hoped the community would carry on.

“Make my child’s death worthwhile,” Heyer’s mother said at the memorial service. “I’d rather have my child, but by golly, if I’ve got to give her up, we’re going to make it count.”

The events of the weekend have influenced and in some ways strengthened ongoing efforts to improve the local community, said Maria Niechwiadowicz, the parish administrator at Trinity Episcopal who runs the church’s Bread and Roses nutritional outreach program.

She wasn’t on the front lines of the counter-protests, playing more of a support role back at the church and at the memorial service for Heyer. After an intense several days, some socially active city residents are “on the verge of burnout,” but it is important to return to the work of improving Charlottesville for all, she said.

The church garden will host its Thursday work gathering, as it does every week, she said. The Bread and Roses mobile kitchen demonstration will continue as scheduled this weekend at a city farmers’ market.

Thomas and other clergy members chose not to go inside for the memorial service for Heyer, remaining outside the theater and filling that space with prayer. They are planning a candlelight vigil and additional prayer services, but they also need to balance their public activism with ministering to their congregations.

“The work of the church has to continue, because that’s our job, to be priests and pastors to our people,” Thomas said. Sunday school classes will resume soon, she said. The St. Paul’s congregation also is closely tied to the student community at the University of Virginia, which the church overlooks, and the fall semester is about to start.

“At some point we’re going to need to step back and take care of each other,” Thomas said, before deciding what the faith community will do next in response to the threat of a return of racist hate groups.