Clergy from all faith traditions link arms on Aug. 13 as protestors marched through Charlottesville. White supremacists marched on the sidewalk behind the clergy line while men wearing camouflage and carrying long guns came down the street, claiming they were there to “protect free speech.” Photo: Steven D. Martin/National Council of Churches

[Episcopal News Service] When white supremacists descended on Charlottesville, Virginia, over the weekend, sparking violence that left a counter-protester dead and dozens more injured, Episcopalians and other people of faith were among the most visible groups standing in solidarity against hate and bigotry.

St. Paul’s Memorial Church overlooking the University of Virginia campus hosted a prayer service on Aug. 11, the evening before the clashes. The next morning, members of St. Paul’s, Trinity Episcopal and Christ Episcopal joined an interfaith prayer service and then participated in a march to Emancipation Park to rally against the supremacists’ event planned there. The outbreak of violence prompted authorities to shut that event down before it even got started.

The three Episcopal churches in the city also have been active in the Charlottesville Clergy Collective, which now is helping the faith community regroup in the aftermath of the riot.

“I think that it’s incumbent upon us as people of faith to claim that ground, that we’re all created in God’s image, and those who are targets of this hate need people of faith, people of privilege, to show up,” said the Rev. Elaine Thomas, associate rector at St. Paul’s and the co-leader of the Charlottesville Clergy Collective.

Bishops and clergy of the Diocese of Virginia stand together today in opposition to the "Unite the Right" rally. pic.twitter.com/pFiPeUzqJn

The Charlottesville faith community drew support, both in person and verbally, from Episcopal congregations across the country, from Trinity Wall Street in New York City to All Saints Pasadena in California, and several Episcopal bishops and deans released statements condemning the violence.

“In the days and weeks to come, there will be much to discuss as the Jesus Movement responds to the violence and inequality in our world,” Presiding Bishop Michael Curry in a post Aug. 14 on Facebook that added this was a time “remember in prayer those who died and were injured in the violent clashes in Charlottesville.”

Curry, though not in Charlottesville, was deeply engaged with the Episcopal clergy and lay people participating in the rally against hatred, said the Rev. Melanie Mullen, the Episcopal Church’s director of reconciliation, justice and creation care. Curry conveyed his support through social media and text messages.

Mullen was among the Episcopal clergy who responded to a call to travel to Charlottesville in a show of unity, though local clergy were the driving force behind the action. “It was us responding to their needs and encircling this community in prayer.”

The Rev. Gay Jennings, president of the Episcopal Church’s House of Deputies, also released a statement Aug. 14, saying she was “sickened” by the racist violence.

“Even though we sometimes fall short, we Episcopalians strive to be Christians who follow Jesus’ command to love our neighbors as ourselves and who have promised to respect the dignity of every human being,” Jennings said. “And so, we bear a special responsibility to recognize and atone for the perversions of Christianity espoused by white racists and to work for a more just vision of the church and the world.”

Confederate statue has been lightning rod

Seemingly overnight, Charlottesville has become a flashpoint in the ongoing national debate over an increasingly visible strain of racial hatred, promoted by neo-Nazis, Ku Klux Klan members and white nationalists who describe themselves as part of an “alt-right” movement. But religious leaders in Charlottesville know the tension has been building for months, over the city’s plan to remove a statue of Robert E. Lee, the Confederate war general.

Support for that decision was not unanimous, even in a college town seen as more liberal than much of the rest of Virginia. Yet, “people of conscience from a variety of perspectives have made a good-faith effort to strive for understanding and reconciliation in seeking a resolution to the painful local question of our statues,” said the Rev. Will Peyton, the rector at St. Paul’s.

“And it’s very clear that that good-faith effort has made us a lightning rod, because people came from far and wide to express their white supremacist views,” he said. “It’s not about Robert E. Lee.”

The push to remove Confederate monuments has fueled tensions in other cities as well, including New Orleans and St. Louis. The Charlottesville Clergy Collective dates back further, to 2015 when it formed in response to another outbreak of violence fueled by racial hatred – the killing of nine black worshippers at Emanuel African Methodist Episcopal Church in Charleston, South Carolina, by Dylann Roof.

The collective began meeting once a month for breakfast to build relationships. “So that we trust each other, we know each other,” Thomas said. “So that when things like this come up we are able to address them quickly.” The gatherings now draw representatives from 50 to 60 congregations, including all three city Episcopal churches, Thomas said.

In June, they started meeting nearly every week, on Wednesdays, to discuss how the congregations would respond when hate groups come to town.

The increased sense of urgency followed a May 13 rally in which prominent white nationalist Richard Spencer led torch-bearing demonstrators, chanting “you will not replace us.”

The City Council had voted, 3-2, in February to remove the Lee statue. Opponents of the removal sued. Then in June, the city renamed Lee Park, home of the statute, as Emancipation Park.

On July 8, when a small group of Ku Klux Klan demonstrators from North Carolina marched in Charlottesville, the faith community was ready for them. The Charlottesville Clergy Collective organized a unified, peaceful counter-demonstrations and events in which an estimated 2,000 people participated.

But the July 8 rally was nothing like what the city would experience on Aug. 12. The earlier rally drew barely 30 participants who “looked like clownish misfits,” Peyton said. “Everybody in town knew that [Aug. 12] would be bigger.”

Billed as a “Unite the Right” rally, it drew white supremacists from far beyond Virginia. Peyton said he saw one car with a license plate from Ontario, Canada, and an Ohio man was charged with driving a car into a crowd of counter-demonstrators, killing one and wounding 19.

“It’s just become so perfectly clear that these people are using our small city here to promote their national and even global agendas or white nationalism and white supremacy,” Peyton said. “We wish they would just leave us in peace.”

On the eve of the supremacists’ rally, as anxiety grew in Charlottesville, St. Paul’s hosted a prayer service organized by a group called Congregate Charlottesville that featured guest speaker Cornell West, a philosopher and political activist who teaches at Harvard, and the Rev. Traci Blackmon, executive minister of justice and witness ministries of the United Church of Christ. About 700 people packed the church to capacity that evening. But toward the end of the service, Peyton learned they had company nearby on the University of Virginia campus.

Clergy and laity pack St. Paul’s Memorial Church, an Episcopal church across the street from the University of Virginia in Charlottesville, for a prayer service on the evening of Aug. 11. The service was planned in anticipation of the “United the Right” demonstration the next morning and was a call for a peaceful presence. Photo: Steven D. Martin/National Council of Churches

A group of torch-carrying white supremacists had marched to the iconic rotunda across from St. Paul’s and had gathered at the statue of Thomas Jefferson. Peyton went outside to analyze the scene.

The demonstrators, however, did not seem to be aware of the prayer service that was underway. When the service concluded, rather than draw attention to themselves by all leaving out the front, Peyton and other local religious leaders coordinated a more inconspicuous exit from the church in smaller groups that dispersed quickly.

The next morning, the kickoff interfaith prayer service was held at 6 a.m. at the First Baptist Church. Then one procession made its way to Emancipation Park while another group stopped first for an event at a black heritage center before moving on to the First United Methodist Church, across the street from Emancipation Park.

“It was truly horrifying,” Thomas said, describing bands of white supremacists roaming the streets hours before their rally at noon, in some cases picking fights with counter-protesters on their way to the park. “They came to town to cause violence, there’s no question about.”

“Menacing” was the word Peyton used. They carried shields, clubs, Nazi flags. Some were dressed professionally while others wore black helmets and black sunglasses. “When I watched all these people on Saturday unloading from these vans, they were all clearly eager for violence.”

Less than a half hour before the “Unite the Right” was scheduled to begin, city police declared it an unlawful assembly. Minutes later, Gov. Terry McAuliffe declared a state of emergency. 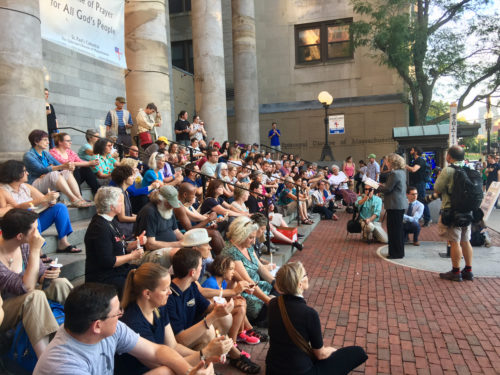 Episcopalians around the United States came together in the wake of the violence in Charlottesville to pray for peace and witness to their baptismal promise to work for justice and
respect the dignity of every human being. Vigils took place from All Saints Episcopal Church in Pasadena, California, to the steps of the Cathedral Church of St. Paul in Boston shown
here. Photo: Bill Parnell/Diocese of Massachusetts

The Episcopal Diocese of Virginia announced at noon on Facebook that none of its clergy or parishioners had been injured. The deadly afternoon crash targeting counter-protesters was followed by an eerie quiet that raised concerns that the supremacists were planning more violence in the evening, Peyton said. The interfaith gathering concluded with a prayer vigil around 5 p.m. at the Methodist church, and everyone went home safely in groups before sundown.

Charlottesville leaders don’t think this is the last they’ve seen of the hate groups, but the faith community has time to regroup.

“We’re just catching our breath right now. Everyone here is exhausted,” Peyton said. “We just need to continue to build bonds between our congregations.”

That mission picks up again on Wednesday, when the Charlottesville Clergy Collective holds its next meeting over breakfast.