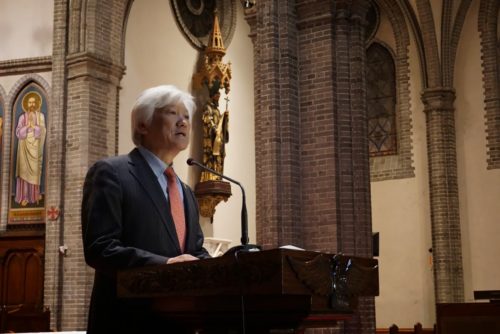 In the letter, the NCCK reiterated its hope to see a peaceful reunification of South and North Korea, but tension has has caused grave concern. “To make matters worse, President Trump has declared that ‘North Korea would face fire and fury, one never witnessed by the world,’ ” states the letter. “Military tension is at its height in the Korean peninsula and there is fear of war spreading among the people.”

The lives of the people in South Korea should not be threatened by the provocative acts of the US and North Korea, said the letter. “The road to peace is a difficult one, but the harder it gets the more important it is that we keep the principle,” the letter states. “We cannot start sincere dialogues when we place blame for the opponent’s extreme actions or when we insist various pre-conditions for dialogue.”

The NCCK expressed its readiness to take active participation. “In order to transform the present crisis into an opportunity and open the door for dialogue, we humbly ask you to immediately dispatch a special envoy to North Korea,” the letter concluded. “Our prayers will be with you always, as you are desperately struggling for a better future of our country.”

Sunday of Prayer for the Peaceful Reunification of the Korean Peninsula