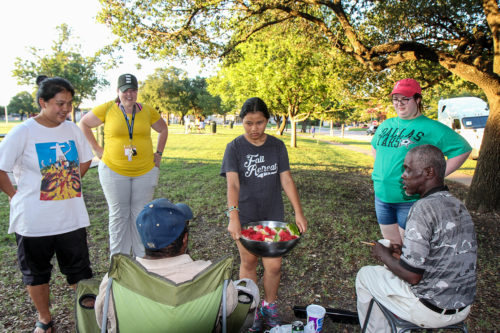 [Episcopal News Service – Dallas, Texas] On a hot, humid Wednesday evening in late June, 18 youth set out from St. Matthew’s Cathedral in central Dallas to nearby Garrett Park, a popular spot for homeless people. They carried a cooler of Gatorade and trays of sliced watermelon.

Offering a cold drink and watermelon to the homeless men and women seeking shade and to the children playing in the park was the last task on the day’s packed agenda. The youth had already visited residents of a nursing home; practiced a skit based Jesus’ healing of the paralyzed man; and eaten lunch with neighborhood low-income children enrolled in Bishop’s Camp, an annual diocesan summer camp.

It was all part of “Summer in the City,” a weeklong, domestic mission trip where youth in the Diocese of Dallas camp out at the cathedral, sleeping on inflatable mattresses on the floor in a classroom, and spend their days engaged in mission, including encounters with people living on the margins.

“[Part of it] is focused on serving homeless people, impoverished people in the Dallas area,” said Amanda Payne, youth minister at St. James Episcopal Church in Lake Highlands, a neighborhood in northeast Dallas. “We’re about 15 minutes away from our church, so it’s not far, but it’s removing the kids from their everyday environment and letting them see that there is poverty and need so close to home.” 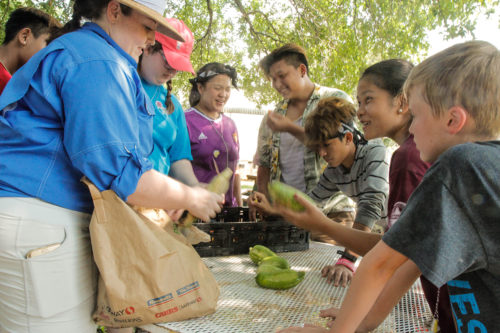 Youth from St. James Episcopal Church and Church of the Epiphany spent a morning harvesting fruits and vegetables in a garden at Our Saviour Episcopal Church in Dallas, Texas. Photo: Lynette Wilson/Episcopal News Service

It was the second year that Payne’s group, the majority Burmese refugees, mostly of the Karen ethnic minority, participated in Summer in the City, and like the previous year, some of the most intense interactions happened between the youth and homeless people in Garrett Park.

“How many times do you get a chance to stop in a safe situation, especially as a teenager, to interact with someone whose been on the street for 10 years,” said Payne, adding that the gospel calls on Christians to reach out to the poor, not shy away from them. “People that are poor get life; and, interacting with them helps us understand why Christ had such a heart for the poor.”

Understanding life and hardship is something the Karen youth also get. Of the Karen ethnic group, many of them were born in refugee camps in Thailand, their families fleeing violence in Myanmar, formerly Burma, the site of Southeast Asia’s decades’ long civil war. Some 100,000 Burmese refugees, many of them ethnic Karen, continue to live in refugee camps along the border in Thailand.

It continues to be a place where people “are running for their lives,” said Moo Eh Hser, 18, who spent the first half of her life living in and around the refugee camps in Thailand. Her parents, she said, fled Burma because the military was driving Karen out of their villages. “There was no freedom for them, no peace for them.” If the military came and a person couldn’t hide, they would kill them.

“It’s still happening. There’s still war going on. It’s just that they have to run for their lives, people taking over their land, it’s just hard for them,” she said. 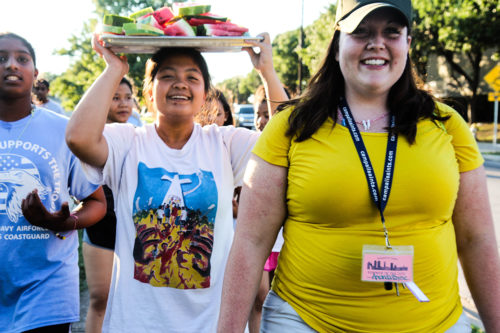 Moo Eh Hser’s family as lucky. Less than 1 percent of refugees worldwide ever are resettled. Many children are born and raised in refugee camps. Of the 22.5 million people with refugee status, more than half of them are under the age of 18, according to UNHCR, the United Nations Refugee Agency.

Images of people running for their lives and the hardships faced by refugees in the camps remains on the minds of the youth as they go about their daily lives and serve others. And the Karen youth themselves come from working poor families and often live in food-insecure households. Witnessing another side of poverty can lead to interesting questions and compassion.

The youth, said Payne, sometimes struggle to understand how someone who speaks English cannot find a job. Many of their parents work long hours in meat processing plants or other low-skilled jobs, their opportunities limited by their level of English proficiency.

“We’re asking them to show compassion for these people who live on the street who is some ways have more resources than they do,” said Payne, who often sees the youth reach into their wallets to give what little money they have, to those on the street.

St. James’ youth group this year has grown from eight to 50 youth, most of them Karen. They live in a cluster of low-income apartments not far from Vickery Meadow, a neighborhood just west of Lake Highlands and home to a diverse population of immigrants and refugees. Youth from Church of the Epiphany in Richardson, a suburb to the north, also attended Summer in the City.

St. James began working with Karen refugees when Catholic Charities, a refugee services provider, contacted the Rev. Cliff Gardner, the former rector, and asked him if he was interested in working with a group of Karen Anglicans in Vickery Meadow. Gardner began offering communion in an apartment complex and a year or so later families began coming to the church. Karen children attended vacation Bible school, parishioners, led by Ginny Keeling, stepped up to help the new members learn English, and relationships began to form.

“There’s a really nice community of people out here. A lot of people support us, like St. James, the church community, they really helped me and my family come up from scratches,” said 17-year-old Soe Win, who came to the United States when he was 9. 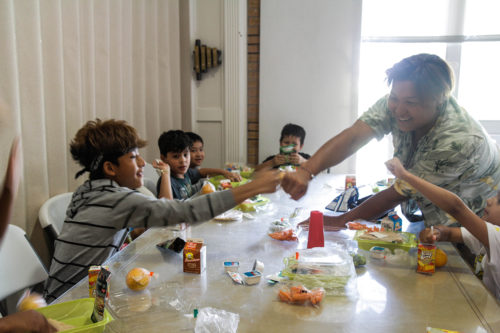 Soe Win spent his early years in a refugee camp, where there was chaos and a scarcity of resources. His parents were luckier than others because they have permission to work outside the camp. They got picked up early in the morning and worked all day for maybe the equivalent of $2 or $3, and that was just to cover food, there wasn’t money left for clothing or other necessities. He never expected to leave the camp.

When Soe Win’s family first arrived in the United States they received little help from the resettlement agency assigned to their case, he said. Through Karen connections, they found St. James.

“That’s when I started knowing a lot of people who loves me and my family,” he said, during an interview with Episcopal News Service in the garden at Our Saviour Episcopal Church in southeast Dallas, where the youth spent the morning harvesting figs from trees and cherry tomatoes and squash from the garden, some of which was donated to a food pantry.

As one of the older members of the youth group, Soe Win is a role model. It’s obvious in his interactions with younger members and with the children enrolled in Bishop’s Camp. During lunchtime, while eating with the Bishop’s Camp children, Soe Win held his table’s attention and later led the youth group in the cleanup, stacking chairs on tables and sweeping the floor.

“The Karen have a real servant’s heart,” said Payne.

That servant’s heart can also be seen in Moo Eh Hser, who joined the St. James’ youth group two years ago. Once, while serving meals at a homeless shelter, she decided to stand at the end of the serving line and hug people. She hugged 411 people that day.

She isn’t afraid to serve others, in fact, she said, “It’s also beautiful while you are doing it, God shows miracle and mystery … everybody has a story.”

Moo Eh Hser graduated from high school this year and this fall plans to study business and theology at Howard Payne University, a private, Baptist university in Brownwood, Texas. Moo Eh Hser goes to St. James and to Dallas Karen Baptist Church, where services are in Karen.

At Garrett Park, while many of the youth sat talking around a picnic table, or playing soccer, Moo Eh Hser, flanked by Payne, offered watermelon to the mostly men sitting or lounging in the shade. One man lay asleep under a tree, and she left him a cup of Gatorade.

“God shows you things through service,” she said. “It’s like Jesus; he came to serve not to be served.”

To learn more about refugees and ministry among refugees visit Episcopal Migration Ministries.

-Lynette Wilson is managing editor for the Episcopal News Service.