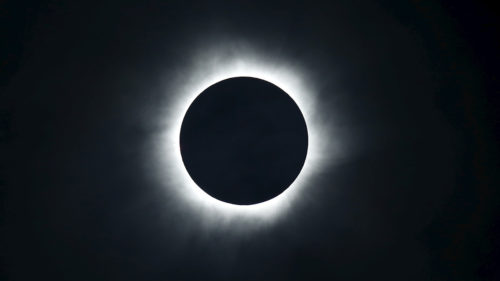 [Episcopal News Service] Dixie Nelson, parish administrator at St. Matthew’s Episcopal Church in Alliance, Nebraska, was working at a motel several years ago when she got a call from a professor in California. He was planning to be in town on Aug. 21, 2017, and wanted to book some rooms – all the rooms.

It was Nelson’s first taste of solar eclipse fever, which has since swept up her town and many more along the path of the coming total solar eclipse on Aug. 21. Episcopal churches along that path, from Oregon to South Carolina, are throwing out the welcome mat to eclipse-watching tourists this month, turning churchyards into campgrounds, hosting viewing parties and inviting the public to contemplate the mysteries of God’s creation.

“God made the universe. This is one of his spectacular shows,” Nelson told Episcopal News Service by phone this week.

She has been busy making arrangements for a makeshift campground at St. Matthew’s. By Aug. 21, the church property will accommodate campers at 30 RV sites and 26 tent sites. The congregation hopes to raise about $4,000 by collecting a suggested donation of $25 per night from some of the thousands of visitors expected to descend on this small city in Nebraska’s Panhandle.

An even bigger celebration is expected in Hopkinsville, Kentucky, which is said to be near the point of greatest eclipse. Astronomers describe that as the point where the moon’s shadow will take its most direct aim at the Earth during the total eclipse. With that the distinction, Hopkinsville is marketing itself “Eclipseville.”

“The community’s been talking about it for years and getting ready,” said the Rev. Alice Nichols, rector at Grace Episcopal Church in Hopkinsville.

Nichols said she has heard estimates that more than 100,000 visitors may converge in Hopkinsville on Aug. 21, which would quadruple the city’s non-eclipse population of about 32,000. She has contacted Episcopal churches across Kentucky inviting parishioners to come to Grace Episcopal to view the eclipse. Grace Episcopal isn’t offering camping, but visitors can pay $30 per adult and $15 per child to reserve one of 75 parking spots and join the church viewing party, with proceeds benefiting the church’s Graceworks ministry.

Grace Episcopal also will offer its guests a boxed lunch before the total eclipse begins at 1:24 p.m. Eye protection is included as well. Nichols stocked up with 300 certified sunglasses, a must for anyone wishing to view the eclipse.

“I hope that it starts people asking questions,” Nichols said in a phone interview with ENS. “I hope that it will kind of bring attention to the fact that religion and science are not at odds with each other.”

Peak eclipse, known as totality, will only occur on a narrow swath of the country and will last less than three minutes. The longest duration of totality will occur near Carbondale, Illinois, making that another top destination for eclipse watchers. St. Andrew’s Episcopal Church in Carbondale is holding a cosmic-themed hymn sing the evening before the eclipse, and the church is raffling an eclipse quilt.

Over in the Diocese of Oregon, campers are invited to pay $250 for the privilege of staying in the path of totality in Silverton, home of St. Edward’s Episcopal Church. Included in that price is space enough for an RV up to 30 feet, two pairs of sunglasses and access to St. Edward’s labyrinth.

The real reward, though, is viewing “the most beautiful thing you can see in the sky,” as one astronomer described the corona to NPR.

Those two churches are both in the zone where it will be possible to see an eclipse of more than 90 percent – weather permitting, of course.

“I’m afraid to look at the forecast,” said Nichols, the rector in Hopkinsville.

Fair weather odds is one of the selling points for Nebraska, where Alliance is promoting itself as offering better than an 80 percent chance of clear skies on Aug. 21.

“Alliance won the geographical lottery,” Nelson said, adding the city’s popularity as an eclipse destination has been bolstered by the nearby outdoor art installation Carhenge. (Think Stonehenge, but made out of old cars.)

As parish administrator, Nelson, 63, typically spends most of her time producing St. Matthew’s newsletter, helping church committees, updating Facebook and taking care of other church business. Lately, eclipse planning has taken over her days, as the congregation prepares its 56 campsites.

The church took reservations for minimum three-night stays, so the excitement will stretch across the weekend that leads up to the eclipse, which falls on a Monday. The St. Matthew’s outreach committee will serve breakfast to campers that Sunday and Monday, and a cookout is planned for Sunday evening.

The city began stepping up its preparations about six months ago, Nelson said. Hotels are all booked, eclipse-related events are scheduled over the weekend and Nebraska Gov. Pete Ricketts is expected to make an appearance. Many of her neighbors underestimated at first what the eclipse would mean for Alliance, but they’re now bracing for a big turnout.

“It’s going to be huge,” she said. “It took them a while to wrap their minds around it.”