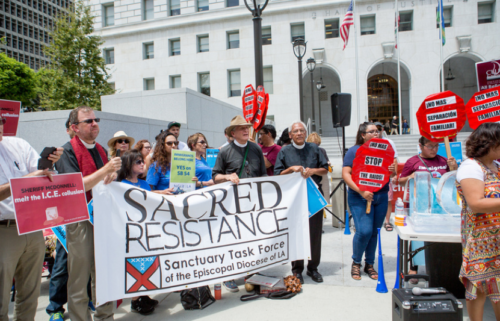 [Episcopal News Service] Episcopalians joined about 200 immigration activists in front of the Los Angeles County Hall of Justice on Aug. 3, bearing signs, beating drums and chanting “Escucha, estamos en la lucha” (“Listen, we are in the struggle”). They also chipped away at a melting ice sculpture, shaped in the letters I-C-E, acronym for the federal Immigration and Customs Enforcement Agency.

“In California, we really have an opportunity to show a different way,” said Garcia, rector of Holy Faith Episcopal Church in Inglewood.

“We are hearing all kinds of things coming from the White House in terms of immigration … including the president painting this broad picture of immigrants as criminals and how bad these people are and how they have hurt our country. But in California we can be a community that really does welcome and include all and make that policy and practice.”

The gathering of Jewish and Christian clergy and laity also intended to show that activists will keep fighting for immigrant rights, chipping away at law enforcement policies and agencies that intimidate undocumented persons and prevent them from reporting crimes when they are victimized, he said.

“Recent history has shown that President Trump’s statement about detaining and deporting only ‘violent felons’ has meant in practice the targeting and detention of people who have lived in this country for years or decades, have become central pillars of their communities, are supporting families and whose only crime is having come to this country illegally,” according to a letter the group attempted to hand deliver to McDonnell.

They were not allowed inside the Hall of Justice, where McDonnell’s office is located. Instead, they were met with barricades and by a wall of deputies stationed outside, but were promised that the letter would be given to him, according to the Rev. Jaime Edwards Acton, rector of St. Stephen’s Episcopal Church in Hollywood, also co-chair of the diocesan sanctuary task force.

“We also wanted to highlight the stories of those who are affected by these policies,” he said.

The letter cited several cases, including that of the Rev. Noe Carias, leader of the Southern Pacific District of the Assemblies of God Church for more than two decades. Carias is married to a U.S. citizen and has two young children, and he was detained during a routine July 24 check-in with an immigration officer.

According to published reports, Carias was deported in 1993 as a teenager, but returned to the United States and ignored a deportation order two years later. He had been granted one-year stays in 2015 and 2016, but earlier this year a request for a third stay was denied.

Carias, according to the letter emailed to McDonnell earlier in the day and given to deputies, “is and has been a faithful and very active member, local church leader and … has 25-year-old deportation orders resulting simply from entering the U.S. without permission as a teenager.”

The Los Angeles Times reported that ICE explained the July 24 action in a written statement, calling Carias “a repeat immigration violator who has assumed multiple identities and nationalities over the years in order to evade federal immigration enforcement.

“During previous encounters with immigration authorities, his actions have established a pattern of misrepresentation or deception to law enforcement, resulting in his removal from the United States on at least three occasions,” according to the report. 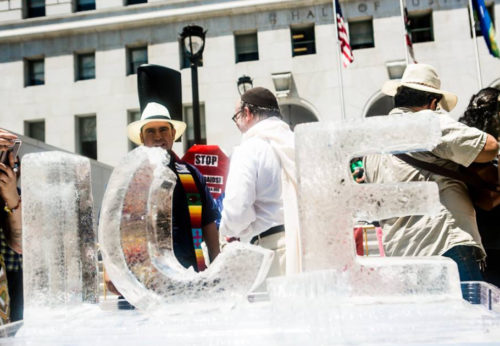 Activists at the rally chipped away at the melting ice sculpture, symbolizing chipping away at unjust ICE policies and practices. Photo:Cam Sanders

The activists also cited the nationally publicized case of Romulo Avelica-Gonzalez, 49, arrested in front of his daughter, now 14, after dropping off another daughter at her Lincoln Heights school. He could be deported as early as Aug. 7, Garcia said.

“He has been held at the Adelanto detention facility since Feb. 28. … He had two misdemeanor convictions from two decades ago,” Garcia said. The facility in San Bernardino County is run by GEO, the nation’s largest private prison company.

According to a Los Angeles Times report, lawyers for Avelica-Gonzalez in June settled those convictions, for driving under the influence and for receiving stolen car tags, in the hopes authorities would vacate the deportation order. A request for an emergency stay of removal of the deportation order filed with the U.S. 9th Circuit Court of Appeal was dismissed in June. Subsequent requests for stays have been denied.

“Nine detainees at the Adelanto facility staged a hunger strike because they were beaten and pepper sprayed,” according to Garcia and the Aug. 3 letter. “These were also not ‘violent felons;’ they were refugees who were demanding asylum, and were refused due process.”

The two-day hunger strike was intended to heighten awareness of conditions at the Adelanto facility, and the need for better medical care and lower bail amounts.

De León has argued that the bill, which would make California a sanctuary state and prohibit ICE agents from entering county jails without a warrant, is needed to ensure public safety. 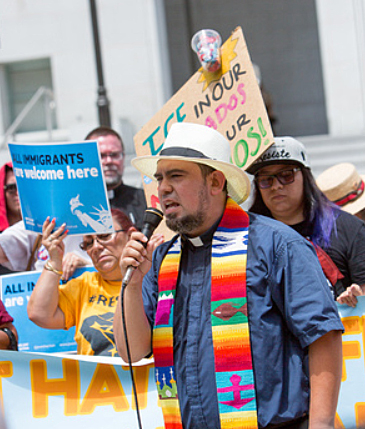 The Rev. Francisco Garcia, rector of Holy Faith Episcopal Church in Inglewood, leads the demonstrators in one of several chants, calling for justice for all. Photo: Cam Sanders

But Garcia said that, as the Trump Administration has intensified its rhetoric, McDonnell has joined increased efforts to lobby state lawmakers to prevent the bill’s passage.

“We demand that, at the least, you stop lobbying against SB54,” according to the letter. “We also urge you to stop the Sheriff’s Department’s cooperation with ICE. The Trump era deportation agenda does not represent the will of the vast majority of Angelenos. As faith leaders and faithful residents of this city, we ask you to work with us to create a city ‘in which righteousness dwells,'” according to the letter, signed by Christian, Jewish, Muslim and a range of interfaith immigration activist groups.

Other law enforcement agencies have responded differently. The California College and University Police Chiefs Association, supports SB54. Los Angeles Police Chief Charlie Beck has said that he will not engage in law enforcement activities based on immigration status, nor will the department work in conjunction with Homeland Security on deportation issues.

The California Senate has passed the measure. It goes next to the State Assembly and, if approved there, to Gov. Jerry Brown to be signed into law.

The immigration activists also were met by a handful of counter-protestors, who carried signs saying they support law enforcement and attempted to disrupt the demonstration, Edwards Acton said.

Garcia said they were not deterred by the protestors or being turned away by deputies, and will continue to reach out to McDonnell.

“We plan to keep the pressure up, to pray and act,” Garcia said. “We’re going to continue to, as people of faith, make this case, so we can actually have a face-to-face sit-down with him.”