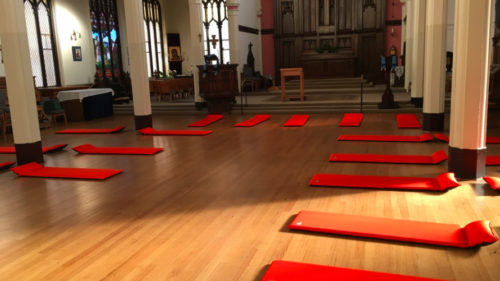 “Sacred sleep” mats are arranged on the floor at the Episcopal Church St. John the Evangelist in San Francisco, California. Homeless visitors can rest weekday mornings on the mats in the church. Photo courtesy of the Rev. Richard Smith.

[Episcopal News Service] The small Episcopal congregation of St. John the Evangelist in San Francisco, California, has embraced its role as a “sanctuary” church in ways that go well beyond the current political debate over federal immigration policy.

St. John is engaged in the immigration debate, to be sure, with its vestry voting this year to offer sanctuary to those facing deportation by the Trump administration. The congregation had offered immigrants similar protection during the first sanctuary church movement in the 1980s.

But for the congregation’s few dozen active members, sanctuary also means providing a place every weekday morning for the city’s homeless population to rest. It means reaching out to members of the LGBTQ community and making them feel welcome. And it means mourning victims of police brutality and supporting victims’ families.

“I’m always sort of worried we’re going to stretch ourselves too thin,” said the Rev. Richard Smith, St. John’s vicar. But as the congregation updates its list of commitments, it has been able and willing to take on more than its modest size would suggest.

“We have to be able to tell our kids and our grandkids that at the end of the day we did everything we could, whatever that may be,” he told Episcopal News Service.

At St. John, this sense of mission – Smith calls it “radical hospitality” – extends to Episcopal rituals as commonplace as the post-worship coffee hour. But it doesn’t end on Sunday. On Monday morning, the doors of the church open at 6 a.m. to invite 70 to 75 homeless city residents each weekday to take shelter. 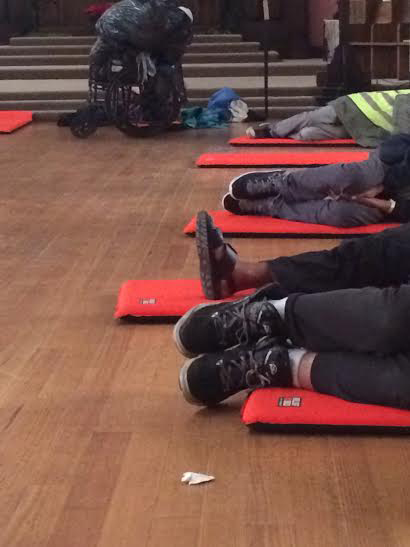 St. John is open to homeless visitors every weekday morning, with breakfast served once a week. Photo courtesy of the Rev. Richard Smith.

This homeless outreach program started about a year and a half ago through a partnership with the local Gubbio Project. Known as “sacred sleep,” the program offers homeless visitors comfortable orange mats, similar to what a hiker might take for sleeping on a backpacking trip. The congregation also serves coffee and, once a week, breakfast before sending the visitors on their way by noon.

“It came as a big relief because homelessness has been a big problem in our neighborhood for many years,” Smith said. “We just didn’t know what to do about it, so this gave us a chance to do something.”

Sometimes, the homeless visitors return to attend Sunday service, though filling the pews isn’t the priority. It has been worthwhile, Smith said, just for St. John to connect with members of its community who otherwise might not set foot in the church.

The congregation has been small for much of its history, starting with its founding 160 years ago in San Francisco’s Mission District, said senior warden Diana McDonnell. Today, average attendance at Sunday worship service is about 65 to 70.

Such numbers tell only part of the story, McDonnell said. The congregation is small, but many of its members are passionate about supporting social justice ministries.

“We’re all there because we want to be there,” McDonnell told ENS. “We are doing this specifically because we are Christians. This is what Christians are about.”

It’s what drew McDonnell, 47, and her wife to St. John about 10 years ago, after they moved to San Francisco from New Jersey. She saw it as a “Goldilocks” congregation – not too big, not too small – and one that worked to bring the word of God into the world.

St. John’s commitment to social justice isn’t a new development. The 1980s were a particularly active decade, when the congregation joined with churches across the country, and across denominations, in offering sanctuary to people fleeing wars in Central America. Children arriving in San Francisco from El Salvador also benefited from a tutoring program launched around that time at St. John.

Separately, St. John was becoming another kind of sanctuary to gay men facing discrimination and the rising AIDS epidemic.\

“It was a community that was really under siege, even here in progressive San Francisco,” Smith said.

The congregation welcomed them then and continues to do so now, at a time when the Episcopal Church has pursued full inclusion of the LGBTQ community, such as through the ordination of gay clergy and creation of same-sex marriage rites. And partners and friends still visit St. John to remember some of those who died of AIDS years ago, their ashes scattered on church grounds.

Smith, 67, was ordained as a priest in 2001 after leaving a career in the corporate world of Silicon Valley. He became vicar at St. John about five years ago and embraced the congregation’s social ethic.

The church houses a food pantry, open every Saturday morning. It has participated in regular antiwar vigils, raises money to provide clean water in a Nicaraguan village and joined marches in the city after a 21-year-old immigrant from Guatemala was shot and killed by San Francisco police in February 2015.

The Guatemalan man, Amilcar Perez Lopez, had been involved in a violent argument with another man when he was killed, the San Francisco Chronicle reported. Smith officiated at a memorial service for Perez Lopez held at St. John.

During his tenure, the congregation also has assisted three immigrants from Central America, a Guatemalan woman and two Honduran men, who are seeking asylum because of threats of violence in their home countries. Each is staying with parishioners in the community, not at the church, but the congregation is prepared to shelter them in the church if that becomes necessary to protect them from deportation orders, Smith said.

The decision this year to become a sanctuary church wasn’t a difficult one, McDonnell said, given the congregation’s 1980s history and its continuing social justice work. Several other Christian churches in San Francisco did the same.

“We’re Christian, and this is what I believe Christians are supposed to do,” she said.