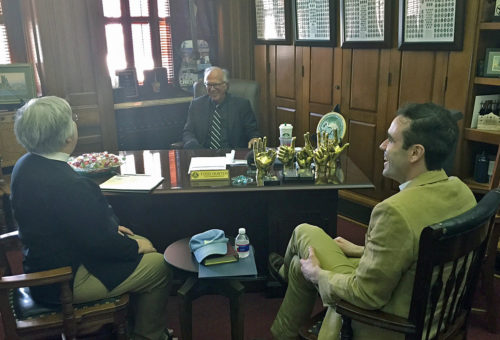 The Rev. Lisa Hunt, rector of St. Stephen’s, Houston and the Rev. Jon Page, pastor of First Congregational Church, Houston met with Rep. Todd Hunter, chair of the Calendar Committee of the Texas Legislature during an Interfaith Advocacy Day to oppose the “bathroom” bill.

[Episcopal Diocese of Texas] A broad coalition of mainstream Texas religious leaders spoke out Aug.1 against Senate Bill 3 and other so-called “bathrooms bills” that would discriminate against transgender youths and adults.

The speakers, who represent millions of mainstream faith community members, included leaders from the Christian, Jewish and Muslim traditions, and a non-denominational Christian parent of a transgender child.

More than 350 people gathered on the Capitol steps in Austin and under the shade of oaks lining the walkway to lend their voices in opposition to the contentious “bathroom” bill (HB46, SB3) in a day of interfaith advocacy sponsored by Texas Impact.

“This is what theology looks like,” General Presbyter Sallie Sampsell Watson of Mission Presbytery in San Antonio told the crowd.

Mufti Mohamed-Umer Esmail of Austin also spoke at the morning press conference. “The Quran states, God is the one who shapes you in the wombs however He pleases,” Esmail said. “The Prophet Muhammad (peace be upon him) said, ‘Indeed God does not look at your faces and bodies, rather he looks at your hearts and deeds.’ I call upon the governor of Texas and the legislature: Enough of the transphobia! Y’all means all!” echoing the slogan on signs that many were carrying.

Citing “emotional and spiritual damage that discrimination does to transgender people,” Presiding Bishop Michael Curry and the Rev. Gay Clark Jennings, president of the House of Deputies, wrote to House Speaker Joe Straus earlier in support of his opposition to any bathroom bill. The Episcopal Church will hold its General Convention in Austin in July 2018.

Following the morning press conference, Texas Impact, offered a brief training on the “10 commandments” of speaking with elected officials, then small groups went to meet with individual senators and representatives and their staffs.

Participants were reminded to be positive, brief and to say “Thank you.” By all accounts, those who gathered had very positive experiences in meeting with either a staff person or their representatives and senators.

Rep. Todd Hunter is chair of the Calendars Committee. An active Episcopalian, Hunter met with Hunt and the Rev. Jon Page, pastor of First Congregational Church of Houston.

Hunt told the seven-term congressman that transgender children and their families will have a hard time finding a safe environment for school if the bill were to pass. She also noted promises in the Baptismal Covenant to respect the dignity of every human being.

“You are the first Episcopalians who have come to visit me,” Hunter said. He told Sharp, Hunt and Page that personal visits matter and encouraged them to continue the practice. “A common sense vote in the House (the bill has passed in the Senate) would neutralize these kinds of bills in the future,” he added. Hunter shared some of the complicated process of legislation and lamented the decline in civil discourse in politics in recent years. Early in July, a fire consumed Hunter’s Corpus Christi office and is still under investigation. And while Hunter seemed unruffled by the bodyguards who now stand outside his door, he was grateful for the prayers Hunt offered for him, his staff and the Legislature.

“In this season of intense partisanship it is tempting for us as Episcopalians to shy away from our role as citizens,” Hunt said, “but meeting with fellow Episcopalian Todd Hunter and learning about the arson of his law office, I am reminded we are citizens together. He, and the other legislators need our support in their critical ministry as a legislators, especially now.”

Texas Impact set up the Interfaith Advocacy Day and helped prioritize House members to be visited, because the House has yet to vote on the bill. According to Texas Impact, a minority misrepresent that the faith community supports the bathroom bill and it was important for legislatures to hear from others of faith who did not. “Regulating who uses what bathroom is a solution in search of a problem,” they said, pointing out that proponents could not point to a single incident not already addressed by the Texas Penal Code. Further, they said it is a waste of time when the state has real challenges.

Texas Impact is a statewide religious grassroots network whose members include individuals, congregations and governing bodies of the Christian, Jewish and Muslim faiths. Texas Impact exists to advance state public policies that are consistent with universally held social principles of the Abrahamic traditions.