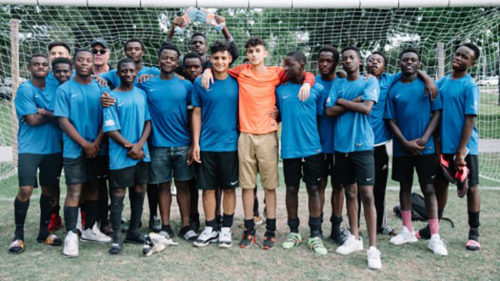 The reVision FC soccer team is made up of mostly African high school students and is coached by Charles Rotramel, a member of St. Martin’s Episcopal Church in Houston. Photo: Diocese of Texas

[Episcopal Diocese of Texas] Brazilian playwright and journalist Nelson Falcão Rodrigues once said, “In football (soccer), the worst blindness is only seeing the ball,” a sentiment with which Houston: reVision CEO Charles Rotramel would probably agree.

On a mildly hot Saturday in Spring, Texas, Rotramel stands next to the soccer field watching the reVision FC soccer team warm up with a ground passing game. He sees a team that has faced more adversity in their young lives than most of us will in a lifetime. The ball glides across the ground as the team of mostly African high school students comes to life.

The match kicks off and reVision FC’s use of Swahili for on-field communication immediately stands out from other teams in the South Texas Youth Soccer Association. All students at Wisdom High School, most of the team came to Houston as refugees from the Democratic Republic of Congo, a country rife with political instability.

“We started with pickup games on Sunday afternoons and kids just kept coming” Rotramel said. “Many of them had never played on a team before.” After months of watching them play on the field at the Gethsemane campus of St. Luke’s United Methodist Church, Rotramel, a member of St. Martin’s, Houston, decided to dip into his past and put a soccer team together.

The story of reVision dates to Rotramel’s time at Rice University more than 30 years ago. After he wrote a paper on the impact a community of positivity can have on at risk youth, Rotramel’s professor challenged him to dream big. Ultimately, he helped found Youth Advocates, a Houston non-profit doing primarily gang intervention work.

“As kids moved away from their gang affiliations, (Youth Advocates) filled that space with what emerged as a youth group centered on positivity and hip hop culture,” said Eric Moen, reVision board member. “That main identity still stands today, more than 20 years later. A solid [peer] community is the rock steady place of welcome and positivity for the reVision kids.”

Moen described Rotramel as a connector and a man who has such a heart for the kids he serves that they accept him as part of their family. “He is the one who has shown them unconditional love unlike anything they have ever experienced before,” Moen said.

Rotramel and his assistants sit calmly on the sidelines and the unique nature of the team’s situation becomes readily apparent. “These kids have a lot of trauma in their background so we have to approach coaching in a very positive way,” he said, explaining their low key approach.

When a ball flies down the left wing, a particularly hard tackle in the midfield doesn’t even bring the coaching staff to their feet. Calmly seated, Rotramel said the team taught him to “make everything positive” even when it feels like that’s not working. “We affirm the good things they’re doing and teach them to improve on the things they need to,” Rotramel said.

For Houston reVision FC, building a sense of community and purpose for the players is what keeps them coming back. Rotramel said most of his team deals with “first generation issues.” Players listen to American music and have cellphones, but the majority of their parents are still adjusting to their new surroundings. “The kids get stuck in the middle and they’re very vulnerable,” Rotramel said. “They’re being influenced by all kinds of negative culture and they don’t have the necessary social support to help them.”

Beyond being a safe environment, a goal of the reVision team is to give the players a chance to play college soccer, a goal that Rotramel believes they can achieve. With a greater sense of purpose, camaraderie and belonging, players have even seen an uptick in grades, a fact the coaching staff puts down to the extra English practice and focus.

“No one thought that it would be like this when we started,” Arsel Kisanga said. “We were just a bunch of kids playing street soccer at least hoping to make it to the school varsity team.”

Rotramel likes to refer to the team as a community of kinship, a place for people to belong. “The cool thing is they want to be up here at the church all the time,” he said. “It’s their identity.”

ReVision player Joseph Kapyamba appreciates the family atmosphere that the team has created. “It’s a second home,” he said. “It helps us grow to become better people in life and prepare for the real world. It keeps us out of trouble. A lot of us wouldn’t be here today if it wasn’t for this team.”

While Rotramel readies a substitute on the sidelines, you can sense the passion the coach has for changing lives. “I think of soccer as some of the most important work of my career. You’re teaching honor, respect and teamwork inside a team framework and I think more churches should be doing this,” Rotramel said.

With the growth of soccer in the United States, finding a way to leverage that popularity for social good is at the forefront of reVision’s goals. “We’re actively thinking about other teams that we could start, because we keep attracting more and more kids,” Rotramel explained.

After more than 20 years of working with youth from all types of backgrounds, as part of reVision, Youth Advocates and coaching soccer, Rotramel still sees the small details. “They’re good at dribbling and striking, but no ones ever coached them on tactics,” he said. “That’s what we’re focusing on right now.”

As the referee blows for full-time and everyone sits on the grass around the coaching staff, Rotramel stands with a smile on his face. He may be going over details that need to be improved before the next match but in reality, he’s helping young men navigate a new culture and open up a world of opportunities. You can’t help but wonder how much these same young men have taught him.

“This team is the best team I’ve ever been in because it’s a team that unites people from different countries and nationalities,” Francois Elize said. “It makes us feel safe from the outside world. For me this is like the second family that I’ve been praying for my whole life.”

— Kevin Thompson is a communication specialist with the Diocese of Texas.