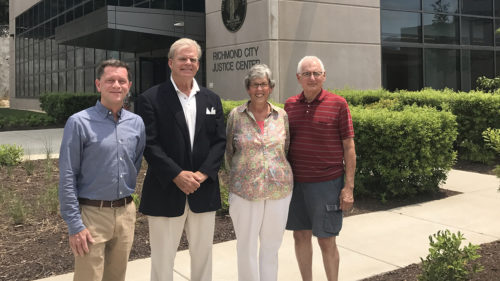 From left, Robert Dilday, John Gayle, Cheryl Blackwell and Sal Anselmo are among the volunteer chaplains from St. Stephen’s Episcopal Church that minister at the city jail in Richmond, Virginia. Photo: Sarah Bartenstein

[Episcopal News Service] Robert Dilday has served for about a year and a half as a volunteer chaplain at the city jail in Richmond, Virginia, leading Bible studies with inmates and, more recently, visiting with those being held in solitary confinement. As part of a growing team from St. Stephen’s Episcopal Church engaged in this ministry, he is careful not to overstate the mission.

“We’re not taking God to the jail,” he told Episcopal News Service. “We’re collaborating with what God is already doing there.”

What Dilday, 62, and his fellow chaplains bring to the jail every Thursday afternoon is the sacrament of Communion and a personal connection through conversation. They are part of a much larger interfaith ministry at the jail that offers a chance for chaplains and inmates both to feel the presence of God in a place they might not expect it.

“It’s meant to be somewhat reciprocal,” said Sarah Bartenstein, St. Stephen’s communications director. “We’re praying for them on Sundays, and they’re praying for us.” 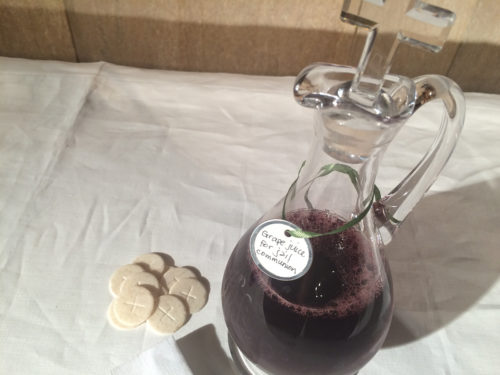 The Eucharist served every Thursday at the Richmond jail by the volunteer chaplains from St. Stephen’s is blessed every Sunday at the church’s worship services. Photo: Sarah Bartenstein

The inmates and chaplains discuss Bible passages taken from the readings that will be part of the three worship services at St. Stephen’s on Sunday. And during one of those services, the congregation blesses the wafers and juice that will be the Eucharist served to inmates who choose to receive it the following Thursday.

This ministry at St. Stephen’s is barely two years old, and now about 15 to 20 men and women from the congregation serve as chaplains on a rotating schedule, typically with two men and two women visiting the jail each week to minister separately to male and female inmates.

Episcopal jail and prison ministries can be found across the country as chaplains seek to live out their baptismal vows to respect human dignity. In Richmond, Virginia’s capital, St. Stephen’s is not the only church to send volunteer chaplains to the jail, but it is one of the few to serve the Eucharist. And Deb Lawrence, the church’s outreach director, said the St. Stephen’s team doesn’t want the inmates to feel during these visits that they are being judged for what they’ve done.

“We’re just there with them. We’re not there to preach or convert, nothing like that,” Lawrence said. “It’s about relationships and people praying for each other on a weekly basis.”

St. Stephen’s first got involved with the jail ministry because of John Gayle, a congregation member who was interested in new outreach opportunities.

Gayle, a lawyer who at age 64 specializes in consumer law, had some past experience with criminal law and representing inmates. He already was involved in a church ministry of bringing the Eucharist to people in retirement homes and nursing homes who couldn’t attend church services, and he was drawn to the idea of pursuing a similar ministry at the jail.

Gayle said he wasn’t sure what to expect on his first jail visits. He began simply by reading from the Bible and talking to the men.

“It was such a transforming experience for me in terms of seeing people who are murders and rapists and all kinds of people, who are no different inside than me in their fears and concerns,” he told ENS. “And I found such a humanity in them that was very inspiring to me.”

Sharing the word of God, ending in silence

The Bible studies typically are held in a jail classroom. They start with the Bible passage, sometimes read by one inmate and other times read by several inmates in turn. Then they have a free discussion of what they’ve read.

Dilday said he encourages the inmates to share ways the Bible passages resonate with their experiences. They may choose to read some or all of the passage a second time.

One Bible study session sticks out in Dilday’s mind. The Gospel passage related to the idea of one’s neighbor, he said, and that prompted a discussion about the different ways “neighbor” is understood in American society. A young white man, a middle-aged Latino man and an older black man took particular interest in the subject, and the three inmates engaged in a lively but respectful conversation, with little additional encouragement from Dilday.

The sessions may last an hour or more. To conclude, the group spends a few moments in silent contemplation.

“Silence, I suspect, is rare,” Dilday said. “When those moments of intentional silence are offered, I think they’re appreciated.”

The St. Stephen’s growing team of volunteers has mirrored an overall growth trend in the Richmond jail’s chaplaincy program.  It is overseen by the jail’s sole paid chaplain, the Rev. Louis Williams, who estimates about 150 volunteers participate in the program, an increase of about 60 to 70 since he became chief of chaplains in January 2016.

The Richmond City Justice Center’s inmate population tops 1,000 on an average day, making it the second largest jail in the state behind the jail in Norfolk, Williams said.

The chaplains, primarily lay people, come from dozens of congregations in the Richmond area. One of the chaplains is a Muslim, though most are from various Christian denominations. Some conduct worship services. Others have led groups of inmates in singing hymns.

The volunteers must be recommended by a congregation, fill out an application, undergo a background check and attend an orientation, but one of the most important criteria is that they “have a gift and skill and passion in terms to ministering to the least of these,” Williams said, invoking Matthew 25:40.

Williams, a Presbyterian minister known at the jail as “Pastor Louis,” advises new chaplains during orientation they should be true to their beliefs, but also respectful of other faiths. The jail calls its inmates “residents,” in recognition that most of them are preparing to someday re-enter society. For spiritually receptive jail residents, Williams said, simply sharing faith through scripture can help them succeed on that path.

“Scripture is used to build up people’s identity and give them different perspective, God’s perspective, on who they are,” he said.

Prayer through a cell door

The chaplains take a different approach to ministering to inmates held in isolation, also known as solitary confinement. There is no Bible study here. A deputy is always present. Conversation occurs only while kneeling at the cell door and looking at each other through the door’s narrow slot.

Williams provides additional orientation for these visits, advising the chaplains to emphasize their prayer ministry, not just conversation with the inmates.

Dilday and Gayle are the two chaplains from St. Stephen’s who presently participate in this ministry, typically about once a month. Each time, they visit about 20 to 25 men, never for more than 10 minutes at a time.

The inmates seem to value the human interaction and often have serious concerns they want to share, Dilday said. One man said he was having a hard time dealing with the news that his child had died while he was locked up.

In isolation, “the stories that are shared are a little rawer,” Dilday said. “It can sometimes be hard to leave the jail after hearing those stories.” Such stories can haunt chaplains well after the cell door slot closes shut.

The chaplains don’t serve the Eucharist here, but they are able to hold the inmates’ hands through the slot and pray with them.

Dilday said he wasn’t fearful of visiting the jail’s isolation cells, but initially he felt he was venturing into the unknown. Would it be more difficult to talk with the inmates held here, isolated for a range of infractions?

He and Gayle found that wasn’t the case at all. They and the other jail chaplains have found these visits inspiring, and not just for the inmates.