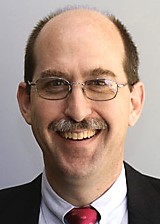 [Historical Society of the Episcopal Church] The Historical Society of the Episcopal Church is pleased to announce its recipient of the 2017 Nelson R. Burr Prize, the Rev. Daniel Handschy. Handschy is rector of Church of the Advent, an Episcopal church in Crestwood, Missouri. He earned a B.A. in Physics from the University of Colorado, Boulder and worked for several years for International Business Machines in Essex Junction, Vermont, before entering the M.Div. program at Harvard Divinity School. He was ordained to the priesthood in 1987. In 2004, he erned a Ph.D. in historical theology from Saint Louis University.

He is honored for his article “Samuel Seabury’s Eucharistic Ecclesiology: Ecclesial Implications of a Sacrificial Eucharist” published in the March 2016 issue of Anglican and Episcopal History.

The Burr prize honors the renowned scholar Nelson R. Burr, whose two-volume A Critical Bibliography of Religion in America (Princeton: Princeton University Press, 1961) and other works constitute landmarks in the field of religious historiography. Each year a committee of the society selects the author of the most outstanding article in the Society’s journal, Anglican and Episcopal History, as recipient. The award also honors that which best exemplifies excellence and innovative scholarship in the field of Anglican and Episcopal history.

Those interested in obtaining a copy of the article may contact Matthew. P. Payne, director of operations of the society at administration@hsec.us or (920) 383-1910.