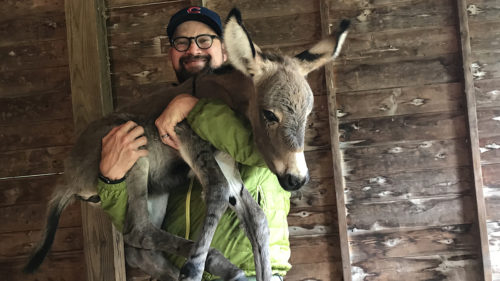 [Episcopal News Service] Trinity Retreat Center has 55 acres in rural northwest Connecticut, a history that dates back more than 100 years, ties to a prominent New York City congregation and plans to reopen after closing five years ago.

And it has donkeys – five of them, going on six.

The retreat center’s directors, working with a rescue group, purchased four donkeys in January to help protect the center’s chickens from the foxes and coyotes that had been thinning the free-range flock. On July 25, one of the donkeys gave birth to a newborn, generating, even more, buzz for the center as it prepares to host a preview picnic on July 29 for the community in West Cornwall.

“Since they’ve come here, they do far more than protect the chickens. They’ve’ become part of the personality and energy of the place,” Joseph Rose, one of the directors, told Episcopal News Service.

Trinity Retreat Center, a mission property of Manhattan’s Trinity Church Wall Street, was happy to be able to rescue at least two donkeys that likely would have been sold for their hides. The plight of the donkey is being compared to that of the elephant and the rhino, animals slaughtered around the world to feed the appetite of a black-market industry. In the case of donkeys, they are threatened because their skin is coveted for its use in a Chinese medicine known as “ejiao.”

The retreat center paid $300 each for its donkeys. Then the directors learned two more donkeys were available and needed a home.

“It was kind of a quick decision, and we wound up bringing in four. And two of those donkeys we found later were pregnant,” Rose said.

Meet Fern and Francine, two of TRC's newest residents. They're two of four sweet donkeys arriving at the barn tonight, all of them saved from Texas kill pens. Thanks to our super amazing farm hand Erin and her family for working late to bring them home. #donkeys #farm #animals #friendlybeasts #retreat #rescue #animalrescue @trinitywallstreet

He and his wife, Heidi Rose, the retreat center’s executive director, and their daughters are fans of Fox’s “The Simpsons,” so they named two of donkeys after characters on the show: Marge and Maggie. Marge is the donkey who just gave birth, and they named the newborn Lisa, after another character from the show.

The other two donkeys are Fern and Francine. Marge is thought to be the oldest of the group at about 4 years old. They arrived malnourished and showing signs of abuse, but they gradually warmed to the staff at Trinity Retreat Center.

Donkeys are known by farmers to be useful in the fight against predators, but there is even deeper significance in their presence here at the retreat center.

For starters, there are the biblical references to donkeys. In the Old Testament, a talking donkey appears in Numbers, and a donkey carries Jesus to Jerusalem in the Gospels. There also is a legend that the Gospel references are the reason the symbol of the cross can be found in the fur on donkeys’ backs.

Donkeys are significant locally, too. A previous director at Trinity Retreat Center kept donkeys on the grounds, along with other farm animals, in the 1980s, when the facility was used as a youth camp. Part of the barn is still set up to accommodate donkeys. 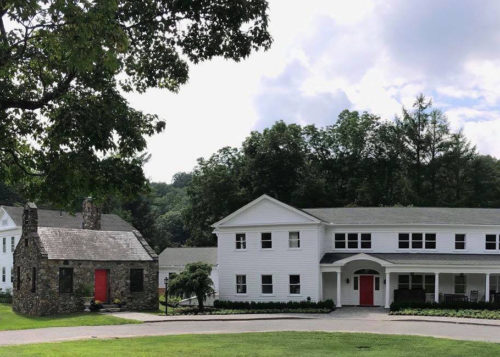 By the end of the 1980s, the facility had ended its use as a camp and transitioned solely to a conference center. It continued for two more decades to host groups from Trinity Wall Street, as well as local parish groups and nonprofits looking for a place to gather in a natural setting.

Trinity Wall Street chose to close the center in 2012 partly because of the expense of maintaining it, said the Rev. Daniel Simons. Over the years, it also had lost a clearly defined mission.

Simons, as one of the centers present directors, is working with the Roses to rejuvenate the center as a place where visitors can reconnect with God’s creation. And under its current rector, the Rev. William Lupfer, Trinity Wall Street is newly committed to supporting the retreat center as one of its mission property, Simons said.

“These are properties that are central to our mission. They cost a lot to maintain, and we gladly assume that cost because we have a compelling mission for all those properties,” Simons said. 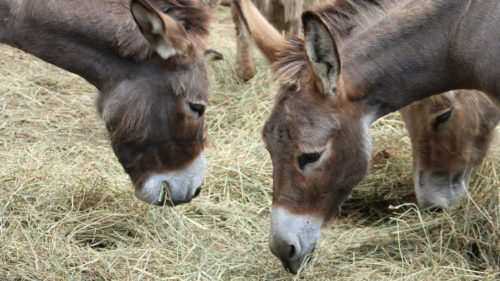 The donkeys at Trinity Retreat Center don’t cost much to care for. Hay is a staple of their diet, though they also enjoy watermelon as a special treat. Photo: Joseph Rose

The retreat has begun taking reservations, starting this fall. By then, there’s a good chance the sixth donkey will have been born, but the exact date is anyone’s guess.

“It’s a healing place, it’s a place of prayer and reflection, but it’s also a place where we want to have a sense of fun,” Joseph Rose said.

The donkeys embody that spirit, he said, adding that he thinks the animals have earned an unfair reputation for being dumb, stubborn and mean. Rose has found them to be very friendly animals and hard workers.

“They can be a little stubborn sometimes,” he said.