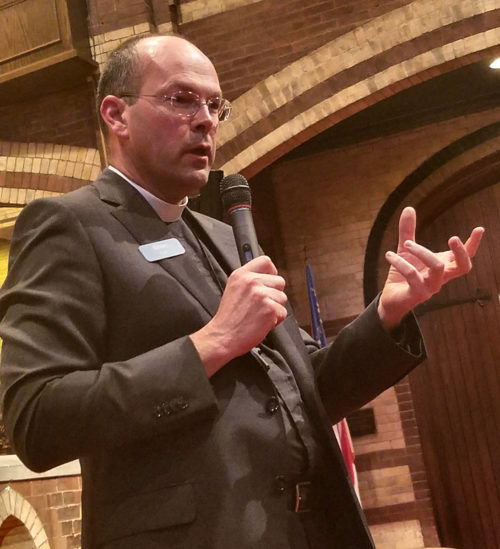 Cole, 49, has served as rector of the Church of the Good Shepherd in Lexington, Kentucky, since 2012. He was elected by 85 votes in the clergy order and 141 votes in the lay order. An election on that ballot required 57 clergy votes and 94 lay votes.

“With an open heart, I am both excited and humbled to be chosen by the lay and clergy delegates of the Episcopal Diocese of East Tennessee to serve as your fifth bishop,” Cole said. “Susan and I look forward to joining with you all in practicing resurrection, in the apostolic work of revealing the Living Christ to a beautiful but broken world. We will be happy to see you soon as we put down roots in Knoxville later in the year.”

The election culminated a search process lasting just over a year.

Cole is a native of southeast Missouri and graduated from Murray State University in Murray, Kentucky, with a degree in business administration. He is a graduate of The Southern Baptist Theological Seminary and did additional study at the School of Theology at Sewanee: The University of the South. Cole taught in the religion department at Warren Wilson College and served on the program staff of the Appalachian Ministries Educational Resource Center in Berea, Kentucky.

Ordained to the priesthood in 2002 in the Diocese of Western North Carolina, Cole served as the vicar of Church of the Advocate in Asheville, North Carolina. The Church of the Advocate is a homeless worshipping community in downtown Asheville. From 2005 to the time when he was called to serve as rector of Good Shepherd, which includes The Good Shepherd Day School, a preschool with 180 children enrolled from age 2 to Kindergarten, where Cole serves as board chair, he was the sub-dean at the Cathedral of All Souls in Asheville. Cole served on the Executive Council of the Episcopal Church from 2006-2012. He is an associate of the Order of the Holy Cross. Cole’s parish in Lexington.

Cole is married to Susan Parker Weatherford, who is a graduate of Berea College and the University of Kentucky. Their son, Jess, is a student at Samford University in Birmingham, Alabama.

The other four candidates were:

The Diocese of East Tennessee encompasses around 16,000 Episcopalians in 50 congregations, including 44 parishes, three college chaplaincies, and three worshiping communities. The population of the diocese is concentrated in the major metro areas: Chattanooga, Knoxville, and the Tri-Cities area (which includes Kingsport, Bristol and Johnson City), totaling around 2.4 million, according to a U.S. Census estimate.

Pending the canonically required consent of a majority of the Episcopal Church’s diocesan standing committees and bishops with jurisdiction, Cole will be ordained and consecrated on Dec. 2 by Presiding Bishop Michael B. Curry. The service to be held at the Episcopal Church of the Ascension in Knoxville.