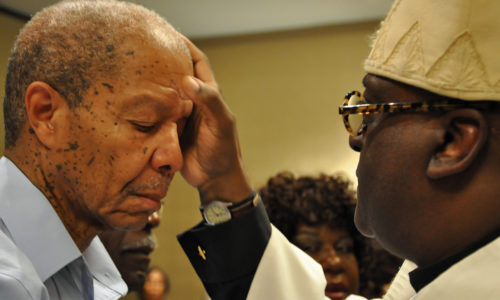 The Rt. Rev. Carl Wright, Episcopal Church bishop suffragan for the armed forces and federal ministries, blesses Bert Gibson of New York. The blessing happened during a July 26 Eucharist and healing service that included recognition of Gibson and all UBE members who had served in the military. Photo: Mary Frances Schjonberg/ Episcopal News Service

[Episcopal News Service – Cherry Hill, New Jersey] African-Americans in both the Episcopal Church and the Evangelical Lutheran Church in America were called this week to help build the future of their churches by working hard in the present.

The call to action came during the Union of Black Episcopalians’ 49th annual conference, held July 23-26 at a hotel here in suburban Philadelphia, Pennsylvania. The UBE met jointly for the first time with the African Descent Lutheran Association.

“Right now, the church is not leading the conversation about justice,” Brittney Cooper, assistant professor of women’s, gender and Africana studies at Rutgers University in New Jersey, said during a July 25 presentation.

“We’re not leading the conversation about truth, and we should be. Instead, we have some perversion – some version – of the church that I don’t recognize, which we call the religious right.”

That version, said Cooper, who was raised Baptist and continues to attend church, has “hijacked the conversation about what truth is and what truth we should be telling.”

Cooper contended that society now has more access to information, both factual and false, than at any point in history “and we still can’t make sense of any of it.” 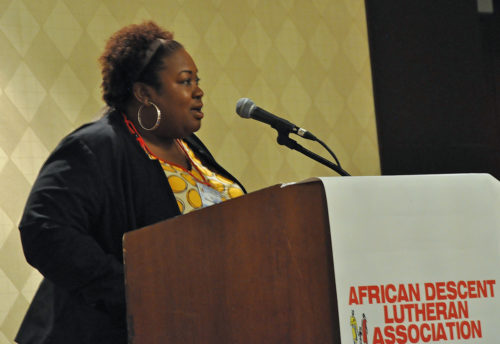 “We’re in a moment when too many black churches are still obsessed with individual sin,” she said. “We don’t talk about social sin.”

Moreover, too many black churches have “capitulated to the conservative, evangelical party line of assimilation into the American project,” she said. Cooper argued that “racism, sexism, capitalism, homophobia and transphobia are eating up black folks.”

“All we do is tell people that God cares about saving individual souls,” she said. “I wonder if our theology needs a shift and what God is calling us to do is to get our own stuff together so that we can do this work of justice.”

“You don’t really know Jesus if you don’t think your theology should inform your politics,” Cooper said.

It is not surprising that young people, who are rightly skeptical about all institutions, are not in church, Cooper said. They are not going to come to church simply because older people tell them to – older people who have a lot of rules to which they require churchgoers to conform.

Instead, she said, the church must remember that Jesus told his followers that “rules and regulations won’t save you.”

“That is why young people are not hearing us because what we offer to them far too often is more rules and regulations about how they should dress and how they should talk and what it means to be respectable,” she said. “Instead, we’re supposed to be the people who are like Jesus who looked at an empire and said this is evil and there’s another way to live.”

“Maybe millennials’ disinterest in church isn’t a judgment,” Copper suggested. “Maybe it’s an invitation” to the church to change its theology and its approach.

Later that day, Presiding Bishop Michael Curry concentrated on the church’s ministry to and with young people in his sermon at African Episcopal Church of St. Thomas in Philadelphia during a Eucharist commemorating the 225th anniversary of the black presence in the Episcopal Church.

The conference honored both Absalom Jones and Jehu Jones Jr., a Lutheran minister who founded one of the first African-American Lutheran congregations in the 1830s, also in Philadelphia. Evangelical Lutheran Church in America Presiding Bishop Elizabeth Eaton presided at the three-hour Eucharist.

Curry reminded the congregation of the Hebrew midwives who organized to defy pharaoh’s order that all Hebrew baby boys were to be killed at birth because he feared the Hebrews’ power. One of the babies they saved was Moses, who grew up to lead his people to freedom.

Then, in Jesus’ time, Herod followed “the pattern that we see of tyrants throughout history and to this very day” who seek to destroy some of society’s children. Today, Curry said, those tyrants would take away their public education opportunities and their health care

“Destroy the children and you destroy a nation,” he said.

“Our children, whether they are black white, red, yellow – no matter who they are – are being left on the garbage heap of America,” Curry said.

“If you want to make America great, Mr. Trump? Save the children,” he said, pacing St. Thomas’ aisle.

The congregation jumped to its feet, roaring approval.

“The child you save today may save you tomorrow,” was Curry’s refrain. 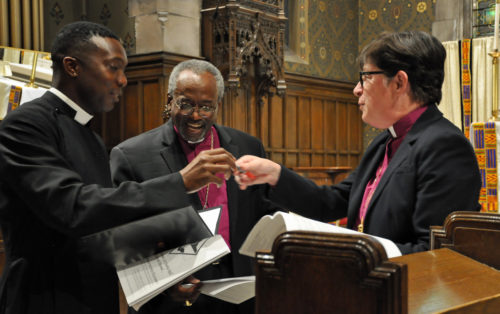 Presiding Bishop Michael Curry and Evangelical Lutheran Church in America Presiding Bishop Elizabeth Eaton go over the order of service with the Rev. Deon Johnson before a July 25 Eucharist at African Episcopal Church of St. Thomas in Philadelphia, Pennsylvania. The service commemorated the 225th anniversary of the black presence in the Episcopal Church. Photo: Mary Frances Schjonberg/ Episcopal News Service

He urged Episcopalians and Lutherans to adopt schools in their neighborhoods, do more for children in the summer, open their buildings to children at times other than Sunday mornings and develop programs for children.

“We need a Sunday school movement that doesn’t just meet on Sunday,” he said. “We need churches filled with children and I don’t care how much noise they make.”

This generation of children needs to hear the real story of Jesus, not what Curry said was the “fake news” about Jesus.

“There’s a lot of fake faith out there that masquerades as Christianity and looks like Christianity but it doesn’t have a thing to do with Jesus,” he said, criticizing preachers of the prosperity gospel.

When the message is about wealth and not about service and Jesus, it is a “perversion of the gospel and I don’t care how mega the church is, how big it is, that is wrong.”

“It is false, it is fake and our children are falling prey to it,” he said. 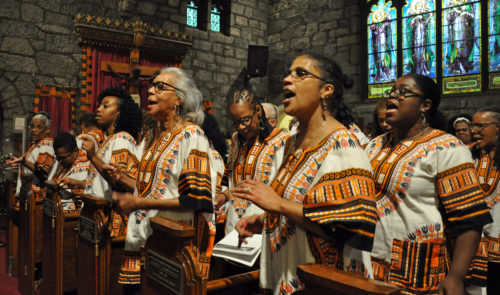 The St. Thomas Gospel Choir raised the roof of their African Episcopal Church of St. Thomas July 25 during a Eucharist that was part of the joint meeting of the Union of Black Episcopalians and the African Descent Lutheran Association. Photo: Mary Frances Schjonberg/ Episcopal News Service

Curry warned that prosperity gospel preaching ranges all over Africa and Central and South America, and is spreading elsewhere. “And it is making some people rich by preying on the poor and that is not the gospel,” he said.

He warned against forms of Christianity in the United States that put down immigrants, poor people and “cozy up to power.”

“And, if you listen, they never talk about Jesus,” he said.

The West, Curry proclaimed, needs to be re-evangelized by a Jesus Movement that preaches and lives a Christianity looks and sounds like Jesus.

He warned that such a movement is not always an easy one to follow. “If you love God, you have to love who and what God loves,” he said, no matter their religious, ethnic, political or ideological affiliations.

“It doesn’t mean you have to let them get away with everything, but you have got to love them,” he said.