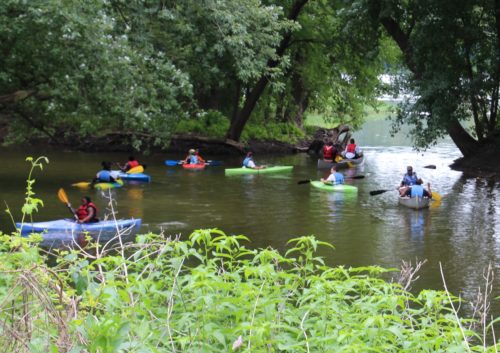 Baltimore children get a taste of water navigation on the Potomac River, putting in at Brunswick, Maryland. It was part of the Sutton Scholars program teaching life skills. Photos: Dan Webster/Diocese of Maryland

[Diocese of Maryland – Adamstown, Maryland] “I’m not doing that.” The soon-to-be high school sophomore voiced his reluctance to go canoeing or kayaking on the Potomac River. But it’s amazing what positive peer pressure, and a little nudge from a camp counselor, can do for a city kid taking on something new.

The Sutton Scholars High School Enrichment Program is finishing its second year of offering a four-week summer session, most of it on the campus of Morgan State University in Baltimore. There are 54 rising ninth- and 10th-graders learning “soft” and other life skills in order to help them succeed in high school and be better equipped for college and work environments.

The scholars spent some of the time at the Episcopal Diocese of Maryland’s Claggett Center in Frederick County. They tackled the ropes course and zip line, learned to tie-dye T-shirts and put into the Upper Potomac in watercraft that requires teamwork.

River guide Bill Kasten explains to Morgan State’s Kea Smith, left, and to the scholars about some of the native plants they’ll see on the river. Here he holds a branch of chicory, which is plentiful along the river. Photo: Dan Webster/Diocese of Maryland

Mentors and instructors lead the scholars in the development of critical thinking, emotional intelligence, financial awareness, work ethic and communication skills. One-on-one mentorship continues throughout the year, between each summer session, to help scholars continue to integrate learned skills into schoolwork, family life and relationships, and work settings.

The program is a unique partnership between Morgan State University and the Episcopal Diocese of Maryland, as well as corporate and private foundations. The Rev. Neva Brown, Episcopal/Anglican chaplain at Morgan State, is program director. Morgan State’s Ms. Kea Smith is the academic director. Returning scholars were joined by new students recruited from Baltimore middle schools who will be in ninth grade this fall. By year four, up to 120 students will be enrolled.

“I am afraid it is a fact that we are failing our children,” Tom Geddes, CEO of Plank Industries, told a recent fundraising reception. “This is why Kevin Plank (founder of Under Armour) and our team and I believe in the Sutton Scholars program. We know that talent is everywhere, but opportunity is not. Programs like this work to change that fact, and will help to shine a light on the talents of the young people in our city, and give them the pathway to opportunity that they so fully deserve.”

The Sutton Scholars is also a YouthWorks site. Employment opportunities dovetail with instructional topics to offer real-life applications. While the classroom portion ends the summer before the scholars’ senior year YouthWorks employment may continue the summer after graduation.

“The Episcopal Diocese has a commitment to public education,” says the Right Rev. Eugene Taylor Sutton, bishop of the Episcopal Diocese of Maryland. “This non-sectarian effort is an important skills-building program designed to help young people in our community navigate high school, secondary education, work, and life in general.”

— The Rev. Dan Webster is a priest in the Diocese of Maryland.