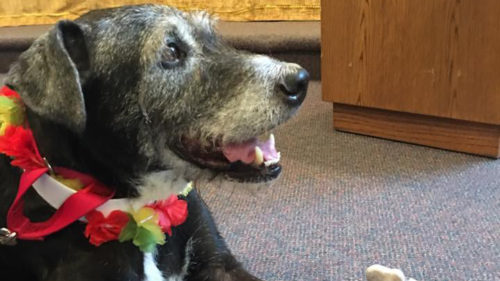 [Episcopal News Service] The priestly pup Nawiliwili “Wili” Nelson has become quite the celebrity from New Orleans, Louisiana, to Las Vegas, Nevada, and he concluded his road trip with the Rev. Bill Miller on July 16 by topping $10,000 raised for animal wellness charities along the route of their “Last Howlelujah Tour.”

Wili, a terrier mix, received a cancer diagnosis in November and was given as little as three months to live, but Miller’s beloved dog has hung on much longer with the help of surgery, chemotherapy and a healthier diet.

Miller, rector at Christ Episcopal Church in Covington, Louisiana, decided to take time off this summer to spend quality time with Wili while he could, and they embarked on the road trip together on July 1. Their six-state tour featured events in 18 cities, including visits to churches, breweries and bookstores, where part of the proceeds of sales of Miller’s two books were added to the daily fundraisers.

The duo made their final stop July 16 at Mountain View Presbyterian Church in Las Vegas. Miller delivered a sermon at two morning services and then spoke at a gathering hosted at the church in the evening.

That one stop raised $3,500 for the Animal Foundation of Las Vegas, Miller said on his Facebook page, and the tour’s final fundraising total reached $12,150.

“Thank you to Mountain View Presbyterian for your incredible hospitality,” Miller said. “Thank you to all our Episcopal friends that turned out to support us. … Our hearts overflow with joy and gratitude.”

Along the way, Miller and Wili have been featured in news report after news report, from the New Orleans Times-Picayune to the Las Vegas Review-Journal. (Episcopal News Service also reported on the duo in this July 10 article.)

Miller, a 58-year-old Texas native, adopted Wili 12 years ago while he was living in Hawaii. (The dog’s full name is intended to be a little bit Hawaiian and a little bit Texan.)

He estimated the round trip will add about 5,000 miles to their Honda CRV by the time they get back to Covington, and after all the public events on the way to Las Vegas, the ride home will just be about spending precious time with Wili.