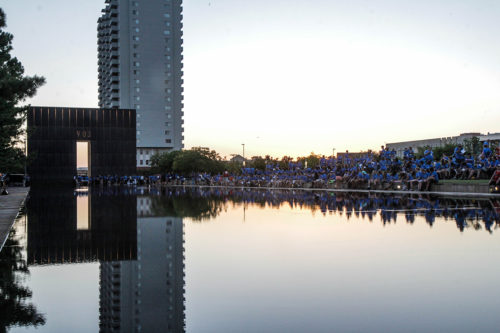 More than 1,300 teenagers gathered as the sun was setting at the Oklahoma City National Memorial on July 12 for a candlelight vigil. Photo: Lynette Wilson/Episcopal News Service

The vigil followed an earlier visit to the memorial’s museum, which traces the timeline beginning 30 minutes before the April 19, 1995, bombing that killed 168 people and wounded 680 others, through the 2001 execution of Timothy McVeigh.

“The way that it’s set up, you move through time and it’s a stunning thing,” said Kiera Campbell, 16, an Episcopal Youth Event 2017 planning committee member from the Diocese of Olympia. “It’s amazing to see how a city pulled together and how a city was able to find peace in each other.”

Thirteen hundred youth from 90 of the Episcopal Church’s 109 dioceses attended the 13th annual Episcopal Youth Event from July 10 to 14 at the University of Central Oklahoma in Edmond, a 20-minute drive from downtown Oklahoma City. The Beatitudes, particularly Matthew 5:9 – “Blessed are the Peacemakers for they will be called children of God,” – inspired EYE17’s theme, “Path to Peace.” (Absent were some youth from Province IX, the Latin America- and Caribbean-based dioceses, who were denied visas into the United States.) 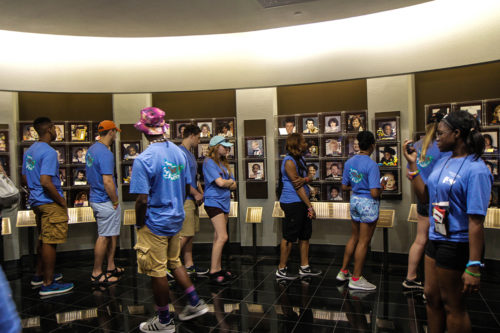 Teenagers attending the Episcopal Youth Event 2017 in Edmond, Oklahoma, visited the Oklahoma City National Memorial & Museum on July 12. Here, they visit the Gallery of Honor, where photos of the 168 people, including 19 children, hang on the walls. Photo: Lynette Wilson/Episcopal News Service

The night before the museum visit and vigil, bombing survivors shared their personal experiences with the youth during an on-campus plenary session. During the candlelight vigil, the youth sat cross-legged on the grass opposite 168 empty chairs – 19 smaller chairs for children – representing each of the victims. A reflecting pool set between two pillars marked 9:01 and 9:03 isolated the minute, 9:02 a.m., that the truck bomb exploded, destroying the Alfred P. Murrah Federal Building.

It was the history, but more importantly, the human response and its lasting impact that Oklahoma Bishop Ed Konieczny wanted the youth to experience. The bombing, he said, brought together the people of Oklahoma in a spirit of unity, in what became the “Oklahoma Standard,” that continues today.

“If you come to Oklahoma and you become an Oklahoman [the story] becomes a part of who you are because in many ways it was a huge turning point, not only for Oklahoma City but for the state,” said Konieczny, a priest in Texas at the time of the bombing. “It was an unfortunate way for things to go, but it energized and brought to light all the good of the people in Oklahoma City and Oklahoma… and it didn’t stop.” 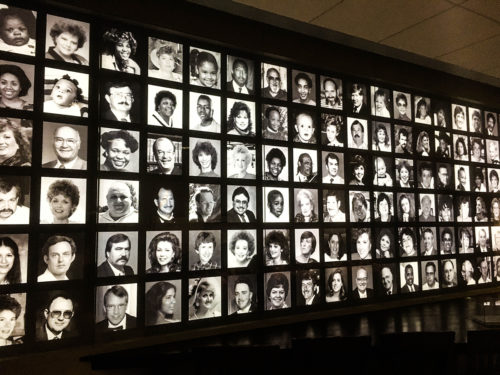 Photos of the victims hang in the Gallery of Honor, the last exhibit, at the Oklahoma City National Memorial & Museum. Photo: Lynette Wilson/Episcopal News Service

Even though the youth weren’t yet born in 1995 – they range in age from 13 to 18 – they live in an increasingly violent world. For that reason, Konieczny wanted to co-host EYE17 in his diocese and share Oklahoma City’s story as an example of peace and resilience.

“The event is relevant because it helps them see all of the other things that happen in our world and our society and the other incidences of violence that take place, Columbine or Virginia Tech or Florida. It seems like every day there is something else, some big, some minor,” he said. “I hope the story is that we as a society have to do something about this. And they have the ability to do that … The message of this is not going to be the bomb. The message of this is life, and that we are going to put our faith where our faith needs to be, and we are going to stand up for justice and say, no, we are not going to live this way, we’re going to do something different.”

Responding to violence and hatred with love was packed into the Path to Peace message.

“The reality is that hatred doesn’t work and violence doesn’t work. Human beings were made by love, because I believe that God is love, and we were made to love and life only works when we love. And this memorial is a painful reminder that hatred hurts and harms, and we weren’t made for that,” said Presiding Bishop Michael Curry, at the site of the memorial. “We’ve been put on this earth to find a better way. To find life and love for everybody, and so coming to this memorial and being here this day is an opportunity to be reconsecrated and rededicated to creating a world where love rules.” 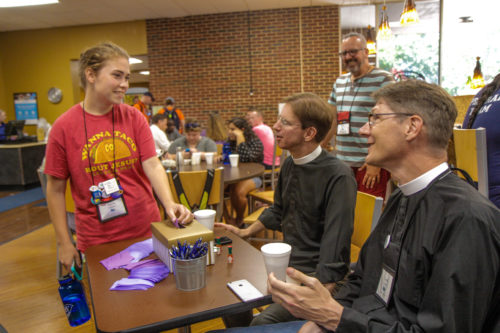 There was some fun at EYE17. Here, the Rev. Tim Schenck, left, rector of St. John the Evangelist Episcopal Church in Hingham, Massachusetts, and the Rev. Scott Gunn, executive director of Forward Movement, sit by while Sierra Palmer of the Diocese of Kansas casts a vote for one of two saints. Saint Quiteria defeated Saint Longinus, 72 percent to 28 percent, and will be included in Lent Madness 2018. The rest of the saints in next year’s bracket will be announced in November. Photo: Lynette Wilson/Episcopal News Service

A year ago, the 16-member EYE17 youth planning committee visited Oklahoma City and the museum and memorial, to get a sense of what their peers would experience. Immediately, it was clear that Oklahoma City’s story is one “everyone needs to hear,” said Andres Gonzalez Bonilla, 16, of the Diocese of Arizona, who served on liturgy and music planning team. The city’s response to an act of domestic terrorism is a “tragic, but beautiful, moving story.”

The EYE mission planning team began imaging the event 18 months ago, based on Matthew’s scripture and the Beatitudes, said Bronwyn Clark Skov, the Episcopal Church’s director of formation, youth and young adults, who oversees youth ministry.

“We are very much taken with that entire package, but also because of what has been happening in the world, we really honed in on ‘blessed are the peacemakers,’” she said.

The triennial youth event, a mandate of the church’s General Convention, drew 1,400 people in all, including 35 bishops, as well as chaperones, chaplains, medical and other volunteers. Every preacher, speaker, exhibitor and praxis session presented the theme in one way or another. 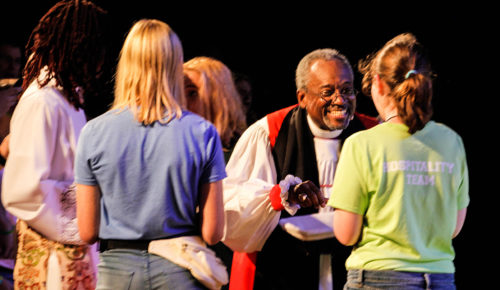 Curry preached during the July 11 opening Eucharist and later that day offered two back-to-back workshops on the “Jesus Movement,” followed by a question-and-answer period. Other speakers, including President of the House of Deputies the Rev. Gay Clark Jennings, bishops, Episcopal Church staff members, representatives from Episcopal Relief & Development, Forma, Episcopal Service Corps and others, offered workshops ranging from advocacy to nonviolent communication in a violent world to living in intentional communities as a path to peace.

“I think that ‘Path to Peace’ has been articulated in many different ways during this event, and my hope is that it has been contagious enough so that when all of the young people who go home from this event start telling the story of what they experienced here and what they learned here that they will feel empowered to actually act upon their own good and right and God-gifted inclination to do something,” said Skov.

During a press conference on July 11, Trevor Mahan of the Diocese of Kansas, a member of the planning committee, said the youth intentionally designed the event to introduce youth to church leadership and the wider Episcopal Church, offering ways to engage further at all levels.

“We want people to be able to go back home and connect with other Episcopal organizations,” she said, and bring back the Path to Peace message to encourage other youth to become involved.

Konieczny sees real hope in today’s young people, who are far more inclusive than previous generations. The makeup of EYE17, the most diverse group ever, attested to that.

“As I said during my homily at the vigil, today’s young people can make a real difference in the world,” he said.

“They are at that age now where they’re setting the stage for how their generation is going to live together, and you can already see the level of acceptance, inclusion and willingness to live in diversity and honor each other. And that’s not always been the case for generations that have gone before; it’s this is us, that’s them and let’s just keep our distance,” said Konieczny.

Plans for EYE20 are underway, and with the help of a Constable Fund grant, the Episcopal Church plans to hold the event in Latin America.