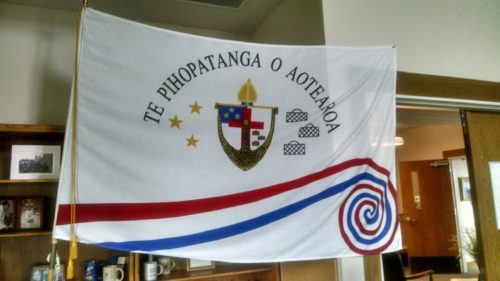 This Maori Anglican flag hangs in the office of North Dakota Bishop Michael Smith, a gift to Smith from a Maori bishop in 2003. Aotearoa is the Maori word for New Zealand, meaning “land of the long white cloud.” Photo: Michael Smith

[Episcopal News Service] Bishop Michael Smith of the Diocese of North Dakota has carried with him for 14 years a tale of two flags and a piece of New Zealand’s indigenous history that he hopes will live on after he is gone.

Hanging in Smith’s office in Fargo is an Anglican flag of the Maori of New Zealand, a gift he received in 2003 when he was a member of an American delegation attending a meeting of the Anglican Indigenous Network in Rotorua, New Zealand.

Smith was a priest at the time, serving on an American Indian reservation in Minnesota. He was honored to receive the flag but only later learned its full significance – for the Maori, it is the rough equivalent of a flag carried by marchers in the American civil rights movement.

In 1998, the Anglican Church in Aotearoa, New Zealand and Polynesia organized the Hikoi of Hope, a nationwide march to Parliament that was joined by about 40,000 supporters of the indigenous people of New Zealand. The demonstration has been credited with advancing social justice issues in response to the legacy of colonial oppression in the country. The flag Smith received was one of the flags that had been carried by the marchers.

“I knew that it was a significant piece of history,” Smith told Episcopal News Service by phone, and he felt it belonged back in New Zealand. “But it was clear to refuse it would be insulting.”

As a symbol of progress made by native New Zealanders, Smith also holds the flag up as an emblem of the partnerships formed between Anglicans in Aotearoa (the Maori word for New Zealand) and Episcopalians in the United States, as well as the church’s responsibility to advocate for social justice.

“I don’t want it to end up in someone’s office forever,” Smith said. “I want people to know the story and where it really belongs.”

The story of the flag’s march into history began in September 1998. The month-long Hikoi of Hope across the country ended Oct. 1 in Wellington, where the stories of indigenous people’s hardships were delivered to New Zealand’s Parliament.

“The Hikoi called on government to show some leadership and acknowledge poverty as systemic, and exacerbated by benefit cuts, increased rents for state housing, student loans and more,” according to “Tangata Whenua,” a history of New Zealand’s Maori written by Atholl Anderson, Judith Binney and Aroha Harris. “The Anglican Church’s concern for the poor and disempowered endured, with Maori clergy at both the fore and in the support base of Maori social justice projects.”

Hikoi is a Maori word meaning “walk” or “march.” At the time, the Anglican Church in New Zealand was in the process of giving more autonomy to Maori and Polynesian clergy by raising them up to greater leadership roles, and the Hikoi of Hope mirrored those efforts while putting pressure on the government.

“It kind of put social justice back on the agenda,” said Bishop Don Tamihere of the Tikanga Maori Diocese of Tairawhiti. 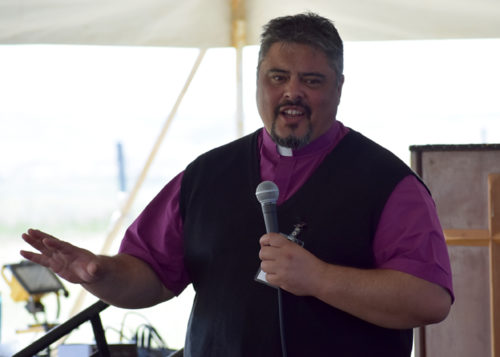 Tamihere spoke with Episcopal New Service in June while attending the Episcopal Church’s Niobrara Convocation in South Dakota. Tamihere, who was ordained and consecrated as bishop in March, said he was attending theological college in 1998 and participated in the Hikoi of Hope.

By that time, New Zealand’s Anglican province was operating on its present three-partner structure that allows Maori, Polynesians and white New Zealanders to “order their affairs within their own cultural context,” the church explains on its website. In 1998, the Maori dioceses were overseen by Bishop Whakahuihui Vercoe, who in 2004 would become the first Maori to serve as primate and archbishop of the Anglican Church in Aotearoa, New Zealand and Polynesia.

Vercoe played host in 2003 when the Anglican Indigenous Network gathered in Rotorua. Members of each delegation were invited to bring flags that represented their native cultures.

Smith, a member of the Potawatomi tribe, is originally from Oklahoma, and he chose to bring that state’s flag, which features the battle shield of an Osage warrior and other Native American icons. The flag made an impression on Vercoe.

“For some reason, he really liked that, he was really drawn to that,” Smith said.

Vercoe asked if he could have Smith’s Oklahoma flag, and Smith gladly offered it. Then Vercoe gave Smith his Maori Anglican flag. 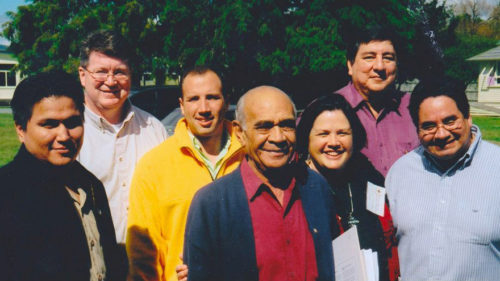 Bishop Michael Smith, rear left, was part of an Episcopal Church delegation to the 2003 meeting of the Anglican Indigenous Network in New Zealand. Smith was a priest in Minnesota at the time. Maori Bishop Whakahuihui Vercoe is shown standing in the center in a red shirt. Photo courtesy of Carol Gallagher.

In 2008, after Smith had become bishop of the Diocese of North Dakota, he met the Maori bishops at that year’s Lambeth Conference, and they underscored the flag’s significance but said it would be improper to return such a gift. They suggested, however, that it may be proper to arrange for the flag to be returned to the Maori after Smith’s and Vercoe’s deaths, which is what Smith will do. (Vercoe died in 2007.)

Back in the United States, Smith occasionally brought the flag to certain events and shared its story to emphasize the common struggle of native people across the world.

“There are many issues that are similar for all indigenous people,” Smith said, from the history of colonialism to the experience of living as minorities in one’s homeland to struggles with poverty.

Seeking advancement of Native Americans in society and within the church has been a longtime goal of the Episcopal Church, stemming from the Baptismal Covenant’s call to strive for justice and respect the dignity of all human beings, said the Rev. Bradley S. Hauff, Episcopal Church missioner for indigenous ministries.

“Our indigenous brothers and sisters are all over the world, and that extends to the Anglican Communion and the church in New Zealand,” Hauff told Episcopal News Service. “Relationships like this, like Bishop Smith experienced, I think, are terribly important for us to establish and to honor and celebrate.”

The 145th Niobrara Convocation fostered such connections, as it has nearly every year since 1870. The gathering of Sioux Episcopalians drew several hundred people June 22 to 25 to the tiny Christ Episcopal Church at Red Shirt Table, South Dakota, including Bishops Smith and Tamihere.

Tamihere attended with a six-person Maori delegation as part of a youth missionary group that travels to Red Shirt each year to work on community projects. Smith told Tamihere the story of receiving the flag from Vercoe, and Tamihere agreed that it would be improper for Smith to return such a gift during his lifetime.

But that conversation reminded Smith that he should take the flag out more and share its story with people he meets.

“If I can’t give it back now, I don’t want it to get lost somewhere in history,” Smith said.