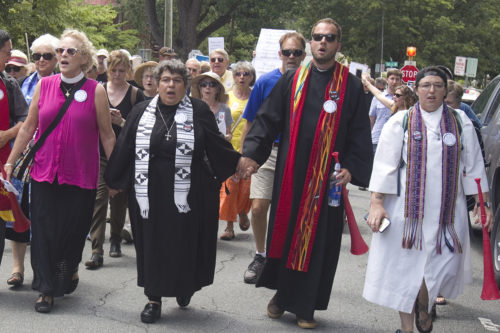 A half hour after the rally ended, Virginia State Police tear-gassed a small group of protestors. Twenty-three people were arrested. Details of the incident had not been confirmed by Monday evening.

The Charlottesville Clergy Collective organized clergy to plan and execute a unified response to the Klan rally. The organization is open to all clergy and 30 have regularly attended weekly meetings since 2015. Three Episcopal congregations are represented. Among the steering committee members is the Rev. Elaine Thomas, associate rector of St. Paul’s Memorial Church, an Episcopal church that serves the University of Virginia community. 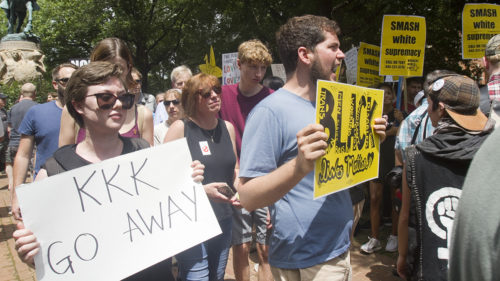 Counter-demonstrators at the Ku Klux Klan rally in
Charlottesville, Virginia, on July 8. on Saturday. In the background is the statue of
Stonewall Jackson. Its relocation to a park outside the city’s center spurred the 30 members of the Klan to rally in protest. Photo: Richard Lord

“This is the body of Christ in action,” said Thomas, referring to the counter-demonstrators. “We need to get out of the pews and into the community. Injustice is never beaten by staying home.”

“My congregation has been extremely supportive of my efforts to protest against the Klan and white supremacists,” Thomas continued. “Activism is what they are all about.”

Thomas said that the anti-Klan activities have unified the city in its opposition, especially the activities of the Charlottesville Clergy Collective.

“The collective has given me the opportunity to increase my exposure to other faiths. And to other races as well as other ethnicities,” she said. “The churches do not agree on everything. But, through the collective, we have come together as a single body to deal effectively with this issue.”

The Charlottesville Clergy Collective was formed in 2015 in response to the shootings at Emanuel African Methodist Episcopal Church in Charleston, South Carolina. It formed as a way for clergy to develop a response network to as a unified body, should a similar event occur in Charlottesville.

The Loyal White Knights of the Ku Klux Klan, based in Pelham, North Carolina, has lost an estimated 80 percent of its membership since December 2016. The loss followed the arrest of its Imperial Wizard, Chris Barker, for stabbing another Klan member, according to Nate Thayer, a journalist who writes extensively about the KKK.

Home to the University of Virginia, Charlottesville is seen as a liberal bastion within the state. In the off-year June 2017 primaries for governor, lieutenant governor and other statewide and local offices, the city’s Democrats had the highest turnout of any party in any non-presidential election in Virginia history.

The Charlottesville area is steeped in history. Thomas Jefferson’s Monticello and James Madison’s Ash Lawn are a short drive from downtown Charlottesville. Two other presidential homes (James Monroe’s and Woodrow Wilson’s) are within a 45-minute drive.

The statute of Robert E. Lee became a focal point back in February with the City Council’s vote to move it from the city’s most prominent park to a park outside the city center. White supremacists were enraged and there was an attempt to get the city’s African-American vice major removed from office.

Reaction to the City Council’s vote drew national attention. Corey Stewart, a white supremacist candidate for Republican gubernatorial nomination from Northern Virginia, attempted to broadcast a Facebook Live presentation in front of the Lee statue. Counter-protesters forced him to cut the attempt short. The local press depicted the event that he had been “run out of town.”

Stewart returned a few weeks later with about 100 supporters who wore motorcycle gang jackets, one of whom was carrying an assault weapon and had his finger on the trigger during Stewart’s speech.

This led to the announcement in late May that the KKK had received a permit to rally in Charlottesville. The community rose to plan its reaction to the July 8 event.

Several organizations focused their efforts on counter-protesting. Some observed and made noise in the park. Others engaged in non-violent direct-action aimed to stop the rally.

“We need to protect our community from the terrorist Ku Klux Klan,” said Grace Aheron, an Episcopal chaplain and justice activist who is from Charlottesville and is affiliated with Showing Up for Racial Justice, or SURJ.

For 45 minutes, SURJ members blocked the entrance to the park so that the Klan could not enter, said Aheron.

“It is because the city of Charlottesville has failed to protect us from the Klan that we have to do this,” she continued. “And we were successful. Not only in delaying the Klan, but in creating community awareness of what is happening.”

A rally of white supremacists has been scheduled for Aug.12 in Emancipation (formerly Robert E. Lee) Park, blocks from the Klan’s July 8 rally site. The city issued a permit for 400 people for the August rally, which is suspected to be much larger than the one on July 8.

– Richard Lord is a freelance photographer and writer based in Charlottesville, Virginia, and New York City.