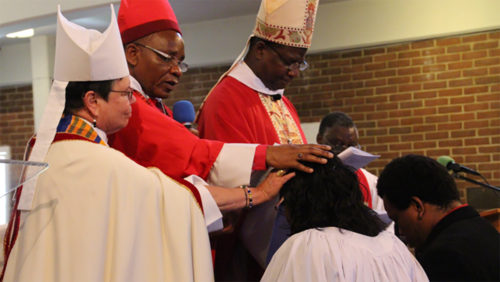 [Episcopal News Service – Baltimore, Maryland] The Rev. John Karanja had a problem. His Baltimore congregation needed a new home. But where could he find one?

Even though Karanja was from the Anglican Diocese of Nakuru in Kenya, his congregation, the International Christian Community, wasn’t really worshiping in the Anglican style. A call home ended with the suggestion that he reach out to the Rt. Rev. Eugene Taylor Sutton, bishop of the Diocese of Maryland.

“I told him what I’m looking for,” said Karanja, recalling the December 2013 meeting. “I left the office knowing I would get a building.”

Indeed, the diocese had closed a church a month earlier. Within weeks, Karanja and his parishioners moved into the vacant building. Thus began a unique ministry between the Diocese of Nakuru and the Diocese of Maryland that is much deeper than the more common companion diocese relationship.

“Both dioceses have a hand in this church,” said Sutton.

Recently, the newly named St. Andrew’s International Christian Community Anglican-Episcopal Church celebrated the ordination of one of its members, the Rev. Janet K. Kuria, to the transitional diaconate. Bishops from both diocese participated.

“This is not planned. This is not in the canons,” Sutton said of the arrangement during his sermon at the ordination service. “We are working it out because the holy spirit has brought us together.”

Karanja joked during the service that he is probably the only priest who has to labor within the strictures of two dioceses and under the oversight of not one, not two, but three bishops.

Getting to this point required careful negotiations. Not everyone favored the joint ministry. Tensions within the Anglican Communion over important theological issues have strained and sometimes broken the bonds of affection between conservative and liberal churches.

Those concerns have not stopped the Rt. Rev. Joseph K. Muchai, bishop of Nakuru, from giving his full support to the project.

“We’re working together to bring people to God’s kingdom, and we can learn a lot from each other,” he said, after the ordination service at which he joined in laying hands on Kuria. “We respect each other’s views. We may not all agree, but what is important is the mission.”

That mission, said Sutton, is built around the central tasks of the church: To proclaim the kingdom of God, drive out evil wherever it can be found and heal whatever is broken. In the case of St. Andrew’s, the mission began with the gift of hospitality.

“For you to be given a church is not easy. It shows love,” said Muchai.

Some of the particulars of the partnership are laid out in a memorandum of understanding approved last year. Presently, St. Andrew’s has the building rent-free, but it pays its own utility bills and other operating expenses. Christian education is offered leading to baptism, confirmation and similar services as prescribed in the Book of Common Prayer. The church also pays a regular contribution to the Diocese of Maryland and is received at the annual convention as a “partner congregation” with voice and vote.

Should any disputes or misunderstandings arise, the bishops of both dioceses will agree to meet and work things out.

The church also is required to offer a weekly Sunday service of Holy Communion as found in the Book of Common Prayer in addition to a Sunday service that caters to the original congregation and draws African immigrants from as far away as Delaware, Pennsylvania and the Washington, D.C., suburbs. In all, St. Andrew’s has about 150 people on its rolls.

Karanja noted with a smile that the 9 a.m. prayer book service is aimed at people who like a traditional service and who like to be in and out of church within an hour. At the 11 a.m. “contemporary” service, no one watches the clock. There you might hear songs in English, Kiswahili or Kikuyu.

The recent ordination combined both styles of worship. At one point in the service Karanja excused himself and begged forgiveness. He had not given the women of St. Andrew’s their moment of celebration. At his cue, at least two dozen women gathered at the back of the sanctuary for a joyous, spirited procession that was part dance and part march. Ululations and shouts rang above the song as the women swayed from side to side, Kuria in the lead.

She has been preaching and evangelizing for years and is currently commissioned as captain in the Church Army, an organization within the Church of England dedicated to evangelism throughout the Anglican Communion.

“It’s a great way to go out and do mission,” said Kuria, who is completing her clinical pastoral work at The Johns Hopkins Hospital and hopes to be ordained to the priesthood next year.

By then, Sutton hopes to have made a second trip to Kenya to visit his ministry partners in Nakuru. He plans to take a team from the Diocese of Maryland with him. Muchai said such trips will help strengthen the fellowship as clergy and lay members from Maryland and Nakuru share ideas about youth ministry and planting churches, possibly developing a system where groups travel between the two countries on a regular basis.

“It’s just my hope that this partnership and mission grows as a model of how people of different cultures can connect,” said Sutton. “Given our differences on certain theological matters, rather than stay in our corners and lob insults and bombs across the ocean, let’s pray together and listen to each other and do common mission. If we do that, then maybe people, the world, will see that Christians indeed do love each other.”

– The Rev. M. Dion Thompson is an Episcopal priest in the Diocese of Maryland.